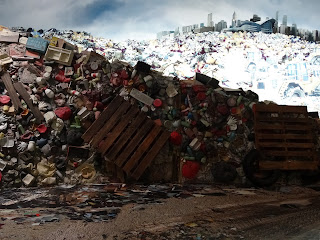 Not a sight many people want to see or imagine 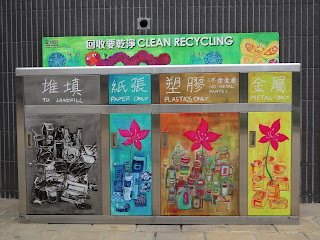 All the more reason then that we should recycle
(as well as reduce, reuse, and repair!)
Early yesterday morning, I made my way to Tuen Mun to meet up with the friend who organizes beach cleanups and fellow "sustainability heroes" (as Rija refers to the members of his Green Sustainable Living HK meetup group).  In the first year or so after moving to Hong Kong, I tried to get to know the lay out of the land better by doing such as taking long bus rides and ended up in this new town in the western New Territories on at least one occasion.  And more recently, I've been over to this part of the Big Lychee to begin hikes along such as the final stage of the 100-kilometer-long Maclehose Trail.
While I get the feeling that there were a few hiking enthusiasts in our party yesterday, our actual aim was to pay a group visit to the EcoPark set up by the Hong Kong government.  But although we went all the way to that remote recycling facility which occupies some 200,000 square meters of land near the Tuen Mun Area 38 fill bank, we ended up only touring the EcoPark's spick and span visitor center rather than any sections where actual hands-on work was being carried out.
At the risk of sounding ungrateful to such as the polite guide assigned to show us around, my distinct feeling was that we were provided with a pretty sanitised view of goings on at the EcoPark along with waste management efforts in Hong Kong as a whole.  And not only did a great deal of what we were told sound like propaganda designed to assure us that official actions to deal with the mountains of waste that have been -- and continue to be -- generated are going well but it seemed to be targeted towards individuals younger than the members of our group; which makes sense when it sounds as though the majority of visitors to the EcoPark (specifically, its still "like new" visitor center) are members of school parties.
On the bright side: I truly welcome any attempts to educate Hong Kongers from a young age about the importance of recycling along with reusing items and reducing their consumption of goods.  And, at the very least, the message was not sugercoated that, to quote one of the text panels at the visitor center: "When the people enjoy the seemingly endless consumption of new goods by discarding the old ones, they are producing more and more garbage. Our city is drowning in the sea of garbage as we speak..."
At the same time, as Rija pointed out, the fourth "R" (repair) appeared to have overlooked.  Worse is my fear that the educational messages being offered up come across as mere platitudes with little substance to them, and there also being little sense that what you do could actually have any actual effect on a large-scale matter and mess.
Still, while the text on the displays and the words we heard being uttered in the short video that we were shown may not make much of an impact, hopefully the sight of a remarkably large and detailed mockup of a section of landfill will get people vowing to be less wasteful in their daily life.  And in this particular case, I am indeed grateful that the mountain of garbage we saw wasn't only not real but also didn't smell and doubtlessly be home to myriad annoying bugs like it'd be the case with the genuine article, which sees some 13,800 tonnes of waste being added to them each day and are coming close to reaching capacity any day now.
Posted by YTSL at 11:59 PM

Gee that a lot of trash pile up. Our community is pretty late on ideal of recyling but we did get on board.
One thing I like our community is doing every so often. We hold a "Take it or leave it" you bring your good items and hopeful it will find a good home.

I like that "Take it or leave it" event idea. Wish we had ones like that around here -- or if they do exist, I wish I could find out more details about them!

It's unfortunate we don't get the true story of what is done or not done with recycling here in Hong Kong. However, I am also glad to see that they are at least trying to educate the younger generation with this tour.

I get the distinct feeling that not enough is being done with recycling here in Hong Kong. So any improvement at this point -- in education as well as practice -- would be good!