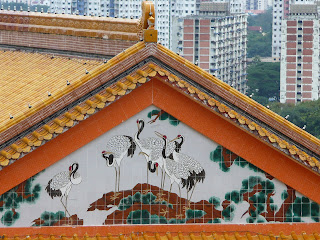 A view of buildings that might not be out of place
in Hong Kong (but, actually, are located in Penang) 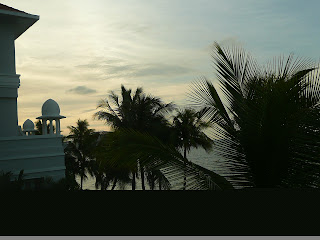 Alternatively, this view looks like what it is --
of a place that's thousands of miles away from the Big Lychee
Late last week up to earlier this week, I was back in Penang -- where my parents still live (but not my siblings as well as myself). Although I was born there, I have spent more than half of my life -- and most of my adult years -- outside of my home state; and it often shows -- in terms of such as my often getting easily mistaken by my fellow Penangites for a foreigner. (I tend to think it's because of the clothes I wear, the hairstyle I favor and maybe also my gait.)

Increasingly too, even while I have not lost my ability to speak Hokkien (my mother tongue and Penang's majority language), Bahasa Malaysia (the national language) and "Manglish" (AKA Malaysian English), I find myself automatically thanking people in stores with a Cantonese m'goi rather than, say, the equivalent Hokkien kahm siah, Malay terima kasih or English thank you!

Additionally, more than four years of living in Hong Kong has gotten me all (pleasantly) surprised -- like many foreign visitors to the place -- to find how cheap great Penang food really can be. (E.g., a plate of my favorite assam laksa still is just RM$2.50 (about HK$6.50 or US$0.83) and a dinner for two consisting of one kilogram of female crabs, half a kilogram of big prawns, a plate of fried fish, a plate of cockles and two drinks (one alcoholic) amounted to less than RM$120 (about HK$313 or US$40)!)

On this recent trip, I further got to really noticing how comfortable Penangites are with speaking English -- not just in terms of their ability to do so but also not having cultural political hang ups with the language. Put another way: English isn't really seen (anymore) as a colonial British tongue or vestige. Instead, it -- and, yes, more so than Bahasa Malaysia -- appears to be the de facto socially equalizing language for Penangites to communicate with their country folk from other ethnic groups.

On another linguistic note: something else I appreciate after spending time in Hong Kong -- and visiting Macau, never mind Beijing -- is how it is that in Penang, I am not expected to know Mandarin (AKA Putonghua to denizens of the People's Republic of China). For in this part of the world which has had ethnic Chinese residents as far back as the eighteenth century, it truly is understood that there are people whose ancestors may have come from China but those ancestors left the old country so long ago that China is no longer looked upon as their descendants' true homeland.

For my part, I look forward to a year not too far in the future now when I can apply for and hopefully successfully receive Hong Kong permanent residency status. At the same time, I don't plan to give up my Malaysian citizenship (to take up such as a Chinese one) any time soon. And come what may, Penang food remains the food that most represents "home" to me. So even if other parts of me may not seem like that of a Penang native, I do reckon that my stomach and tastebuds -- and my abiding passion for tasty food -- will forever remain that of a Penangite! ;b
Posted by YTSL at 8:49 PM

(I tend to think it's because of the clothes I wear, the hairstyle I favor and maybe also my gait.)

Intriguing--How does that way that one walks set one apart from native Malaysians?

--
Separately, I like the idea of dinner being served/charged by weight--you really know you are getting what you pay for!

This was really fascinating, YTSL! Especially to me, given my interests in language, food, and culture. Amazing how cheap the food is in Penang! (Also, I find the term "Manglish" to be really funny!)

No need to give up Malaysian citizenship when its so useful and serves no purpose esp in relation to Hong Kong where having a HK resident card is more useful compared to a HKSAR passport! I'll nvr give up my Malaysian Citizenship!:D

Re my walking style: for one thing, I'm definitely speedier than most other Malaysians/Penangites! Also, I find that certain Malaysian women have a tendency to gently sway from side to side as they walk -- something I don't think I've ever done! :D

Re dinner by the weight: many of the seaside seafood places in Hong Kong charge for certain dishes/seafood by weight too. :)

Glad you found time to visit this blog and even comment -- you sound so busy lately! Re "Manglish": am sure you'll be amused that there are jokes that it stands for Mangled English... ;b

I love Penang food and I am planning to visit it again just for the food! :D

It's such a lovely place with hospitable people too.

Did you eat any durians while you were back?

Yeah, Penang definitely is one of those places that I'd visit for just the food alone. (And if you're wondering, two other places are Macau and Japan!)

Believe it or not, I didn't eat any durians this last time that I was back. Was too busy doing such as stuffing myself with Hokkien mee, assam laksa, Perak Lane beehoon, etc., etc.! ;O

Hi YTSL, very enjoyable read. I would love to one day visit Malaysia. Thank you so much for sharing.

Thanks for reading and enjoying. And if you visit Malaysia, hope Penang will be on your itinerary! :)

I always enjoy your writing about Penang....the food, the culture, etc.

Hehehe......so next time I see you will you demonstrate the walk:

"certain Malaysian women have a tendency to gently sway from side to side as they walk:" Hehehe....can't wait!

When we next meet, I'll gladly demonstrate the archetypal Malaysian female walk -- and also that of Malaysian and Singaporean, and British and American men (the latter I used to actually demonstrate to my introduction to cultural anthropology students to much laughter)! ;D

All those different walks.....I can't wait to see them.

Nice pics. I seem to remember visiting that temple when I was in Penang - it involved lots of steps which was quite hard at the time because my youngest at the time had fallen asleep and I had to carry him all the way up.

Do you get homesick YTSL?

Oooo... you recognized the Kek Lok Si Temple from my photo? Good spot!

And hmmm... not really re the homesickness. I guess it's because I've lived for so many years out of Penang. Also, maybe it's a factor too that these days, I don't live so far away from it as previously when I was living in, say, Philadelphia or Tanzania... and definitely do go back more often! ;b