A treasure trove of Roman ruins.  That's what I imagined that the UNESCO World Heritage listed German city founded in 16 BCE as Augusta Trevoronum and known for a time as the Rome of the North would be. And my German friend and I did make a beeline for many of Trier's Roman sites (notably the Porta Nigra, Kaiserthermen and Konstantin-Basilika) during our visit to the city.

In the end though, we forewent going to see a couple of the Roman attractions (including the Roman Bridge that we hoped, fruitlessly as it turned out, we'd be able to catch sight of on our bus ride to Luxembourg!) in favour of a more balanced itinerary that also included visits to monuments constructed in later but still bygone times.  For the fact of the matter is that and this city on the Mosel River has way more attractions than those from just one period of history! 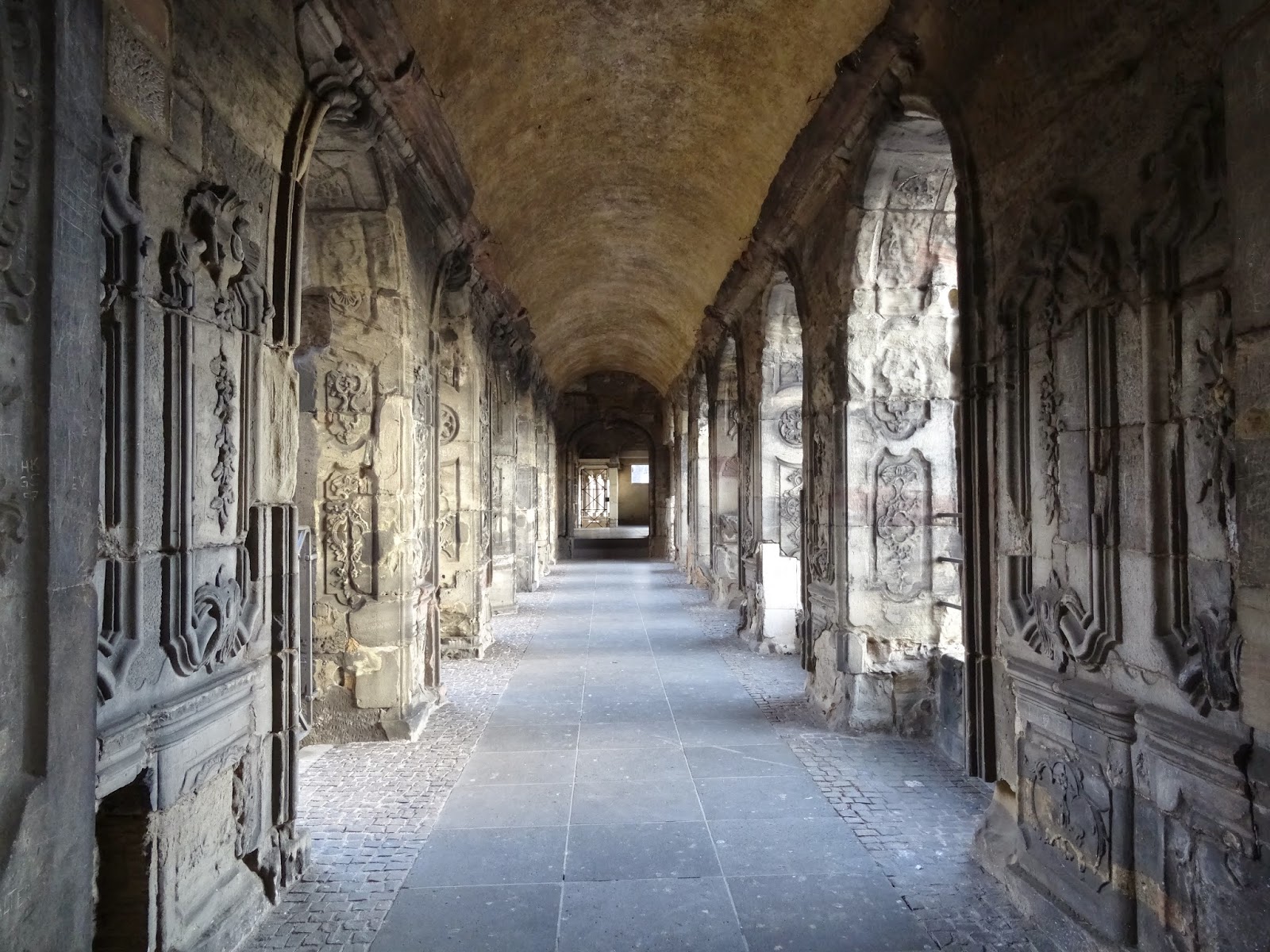 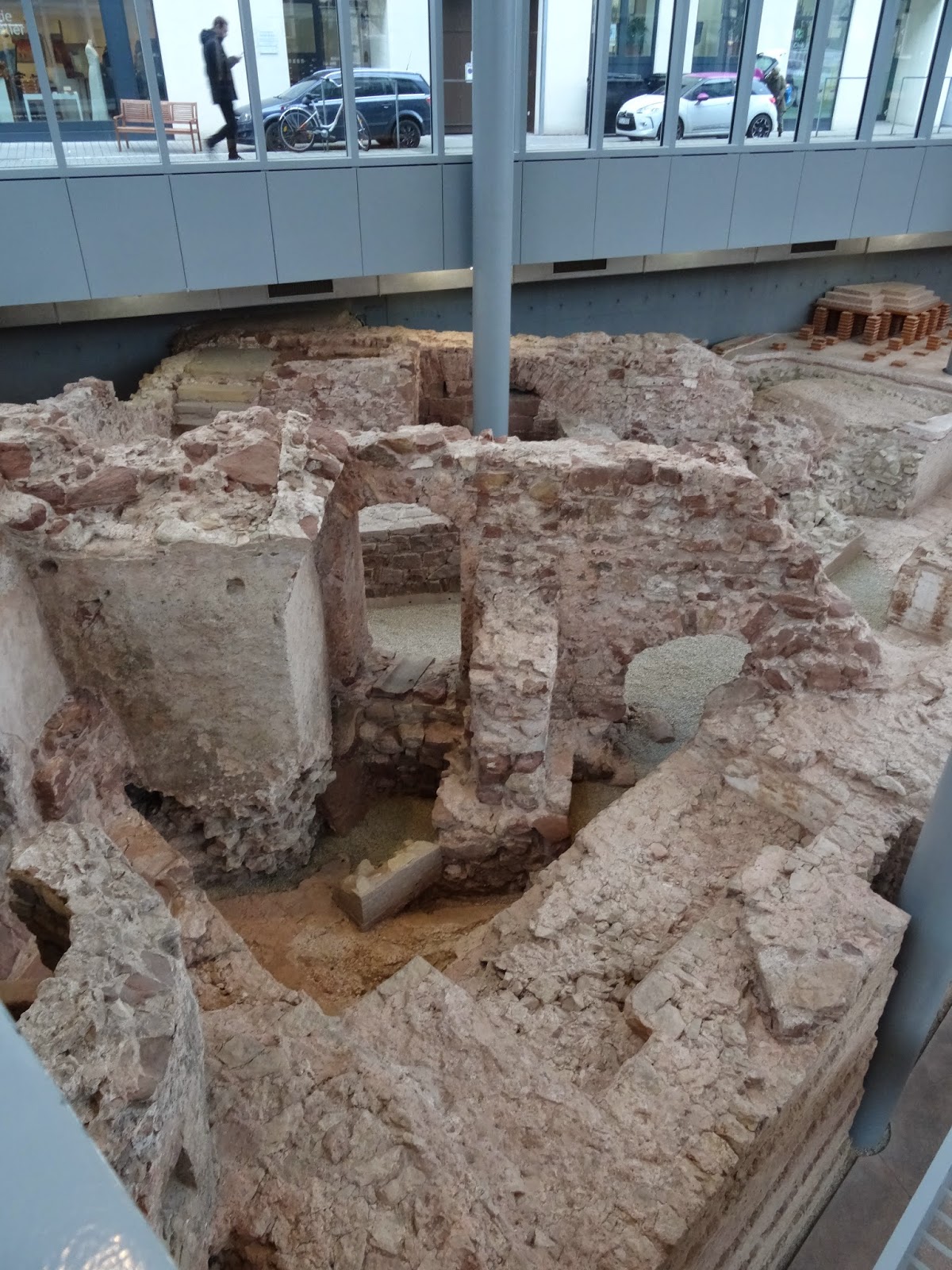 The ruins of the Forum Baths are one of three Roman baths
in Trier, and one of two that we visited (with the
Barbara Thermen currently being close to the public) 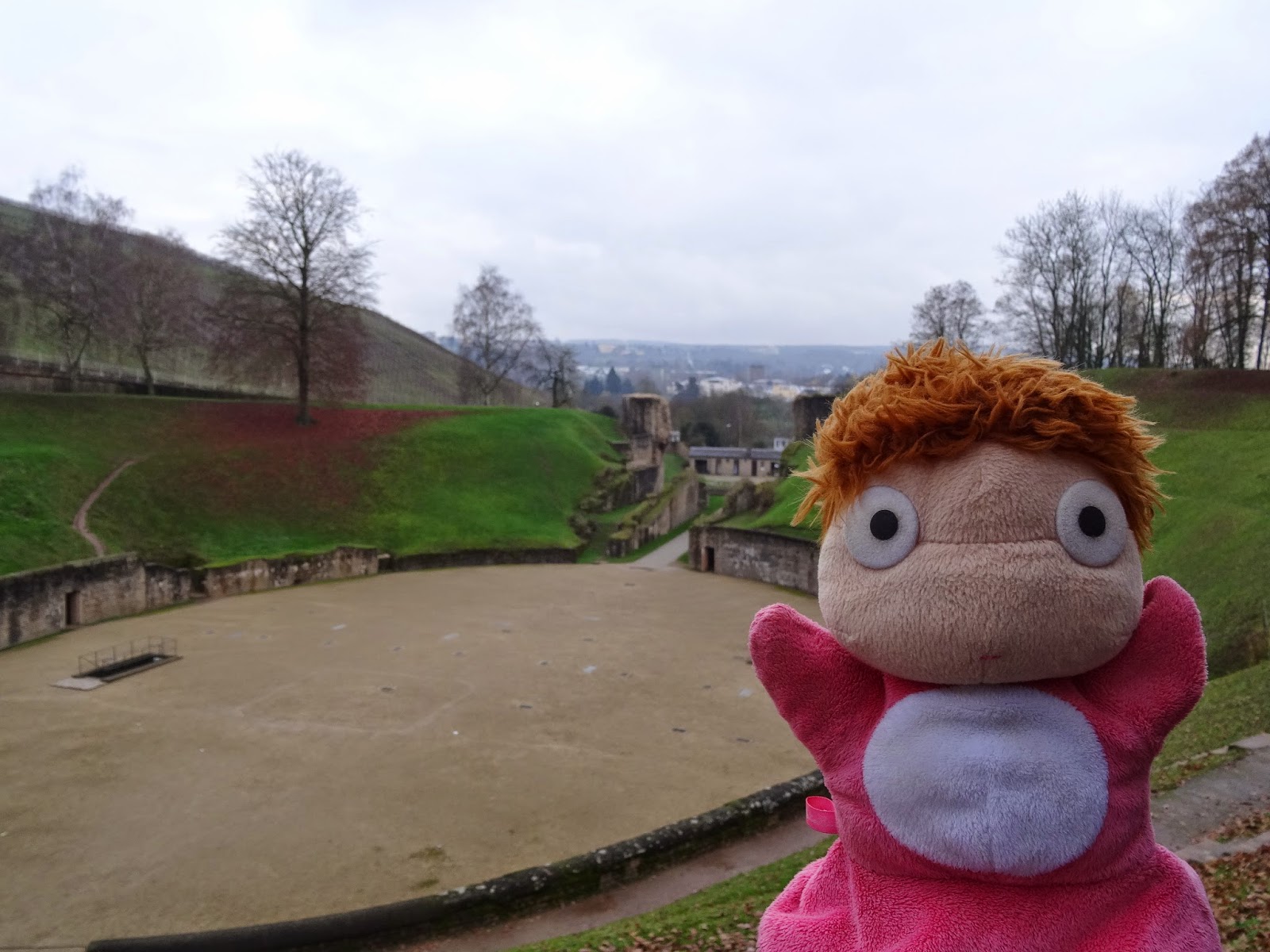 Puppet Ponyo was impressed by the atmospheric ruins of the vast
Roman Amphitheatre that had a seating capacity of 20,000! ;b 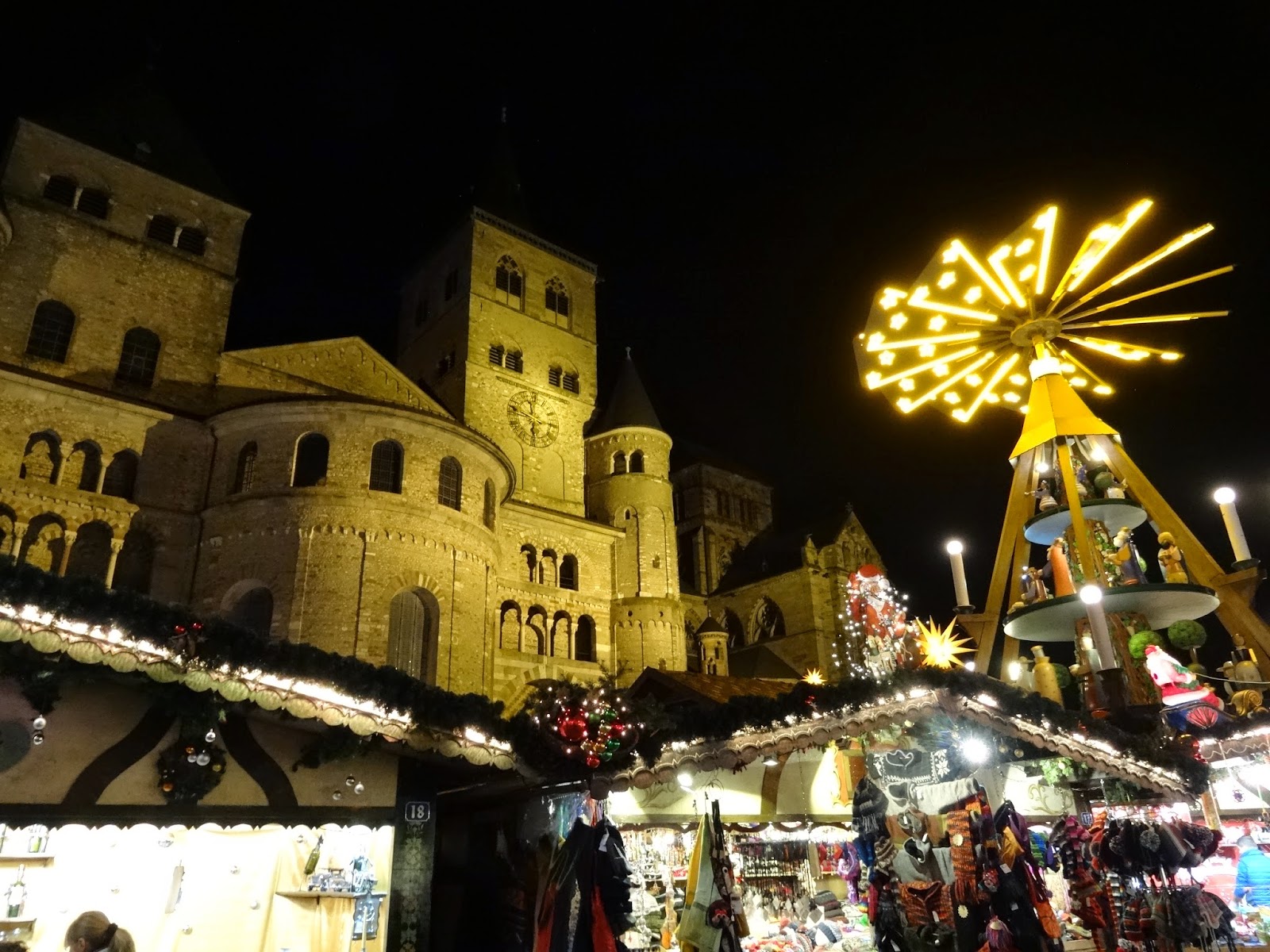 In the shadow of Trier Cathedral is the town's
lively -- and brightly lit -- Christmas market :) 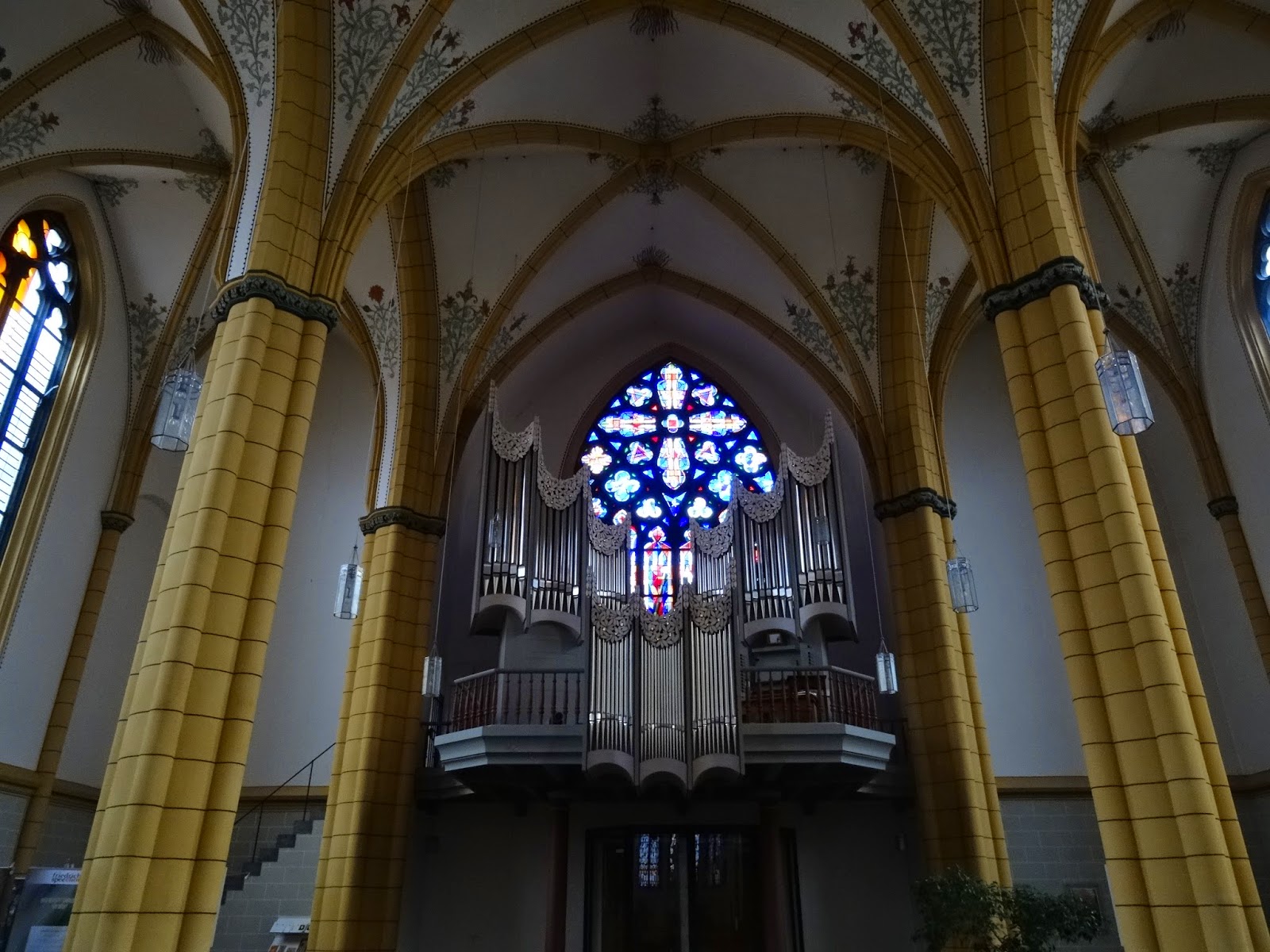 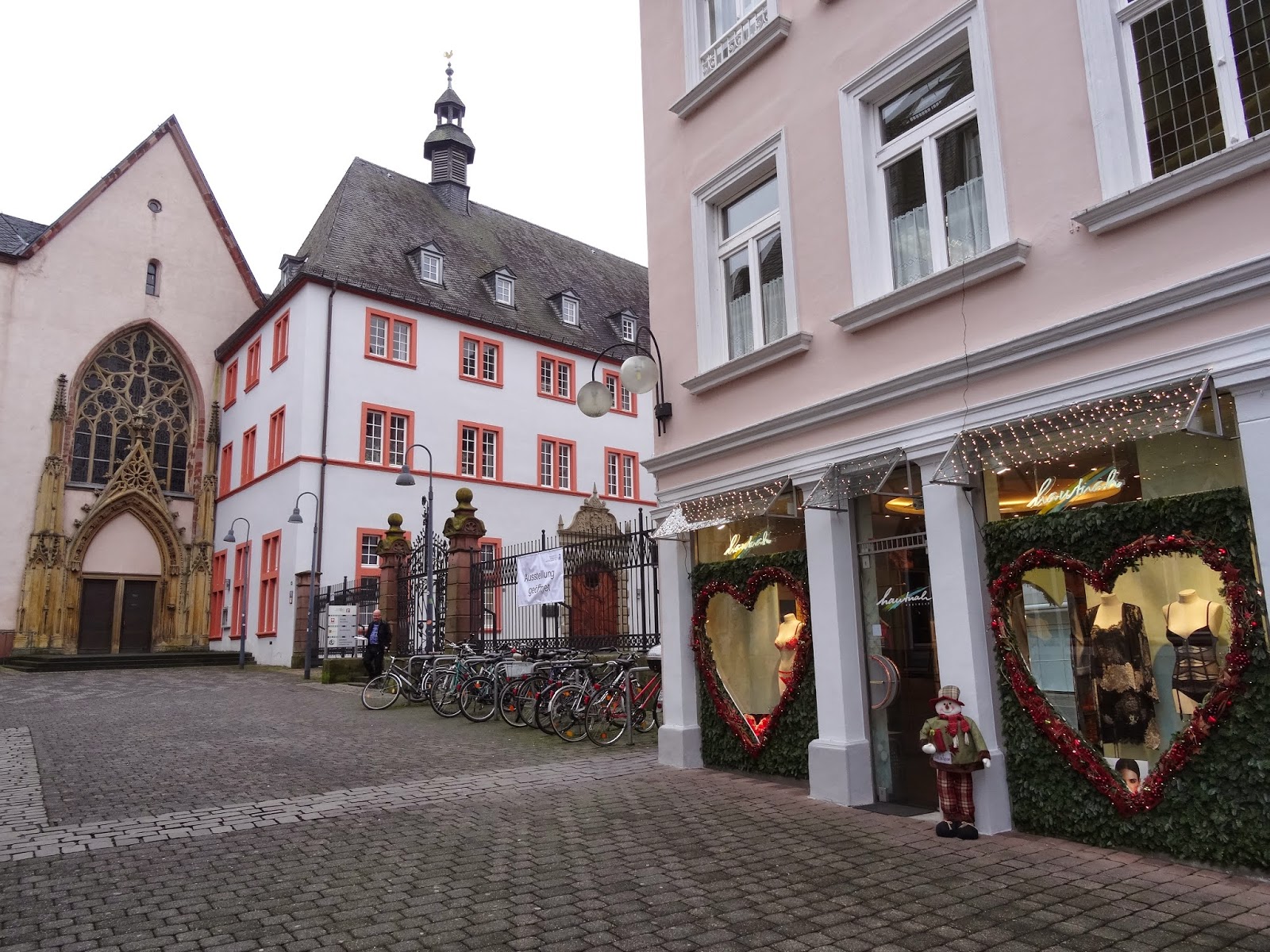 The proximity of a sexy lingerie store to the Jesuit Church
and old Jesuit College made for a sight that amused me greatly ;b 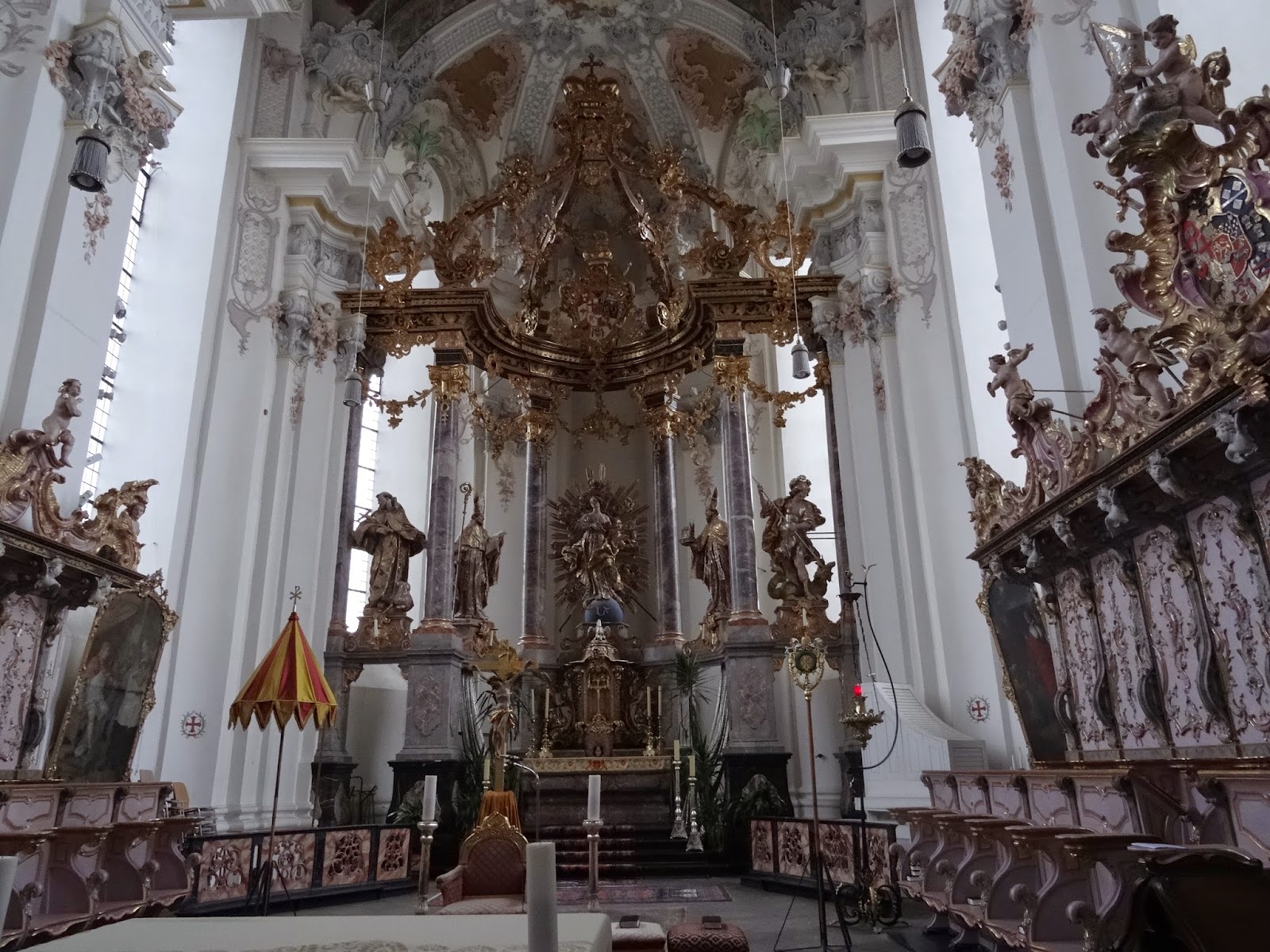 Another day, another impressive church interior --
this one the entirely Baroque St Paulin's 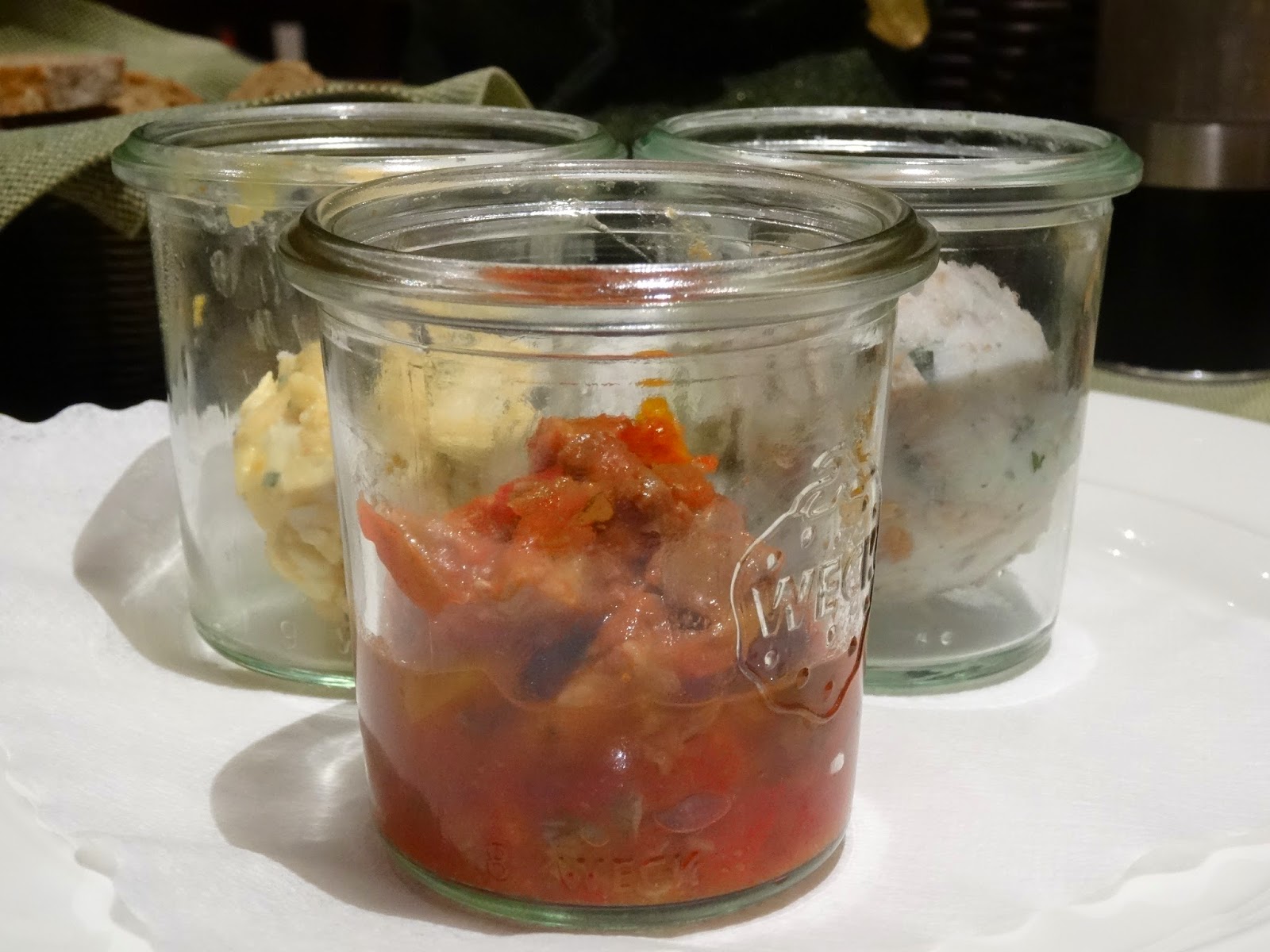 Three of six delicious spreads -- including one largely of lard! --
I had with beer and five different beers at Trier's wonderful Kraft Brau ;b

I don't know if the United States in there history every had public baths or not.
But I know people who lived in mountain and had tub hidden in the woods that they built a fire under to keep it warm

I know of spa towns in the US (like Saratoga Springs) but have never been, so don't know if there are public baths there or not.

An outstanding travel entry - even somewhat inspiring...Ponyo looks enthralled, as if reliving the events which took place in the Amphitheatre centuries ago...The photo of the Christmas market with Trier Cathedral in the background - conveys an authentic holiday spirit which is often missing in garish Christmas decorations.

The photo of the lingerie store with the Jesuit Church in the background, is kind of surreal - my type of photo...The complex interior ornamentation of St Paulin's is impressive. The only thing missing is some Baroque music coming through my speakers, like Bach or Handel.

Re the Amphitheatre: it's a trek from the center of Trier but definitely worth it to my mind. Some 2,000 years on, one still can easily imagine how it looked in its heyday.

Re the Christmas Market: Trier's was my favorite of the many I visited on this holiday -- and not just because of its scenic location. :)

Re the Jesuit Church and St Paulin: in case it's not obvious, my German friend and I were the only people there inside both of those extremely quiet churches on the occasions that we visited them! ;O

There are mineral baths one can visit in Saratoga Springs and soak in a porcelain tub. I think many of them are now part of private spas/resorts. I have never been though I don't live too far from there.