Frankenstein, and creepy sights and sounds in Trier! 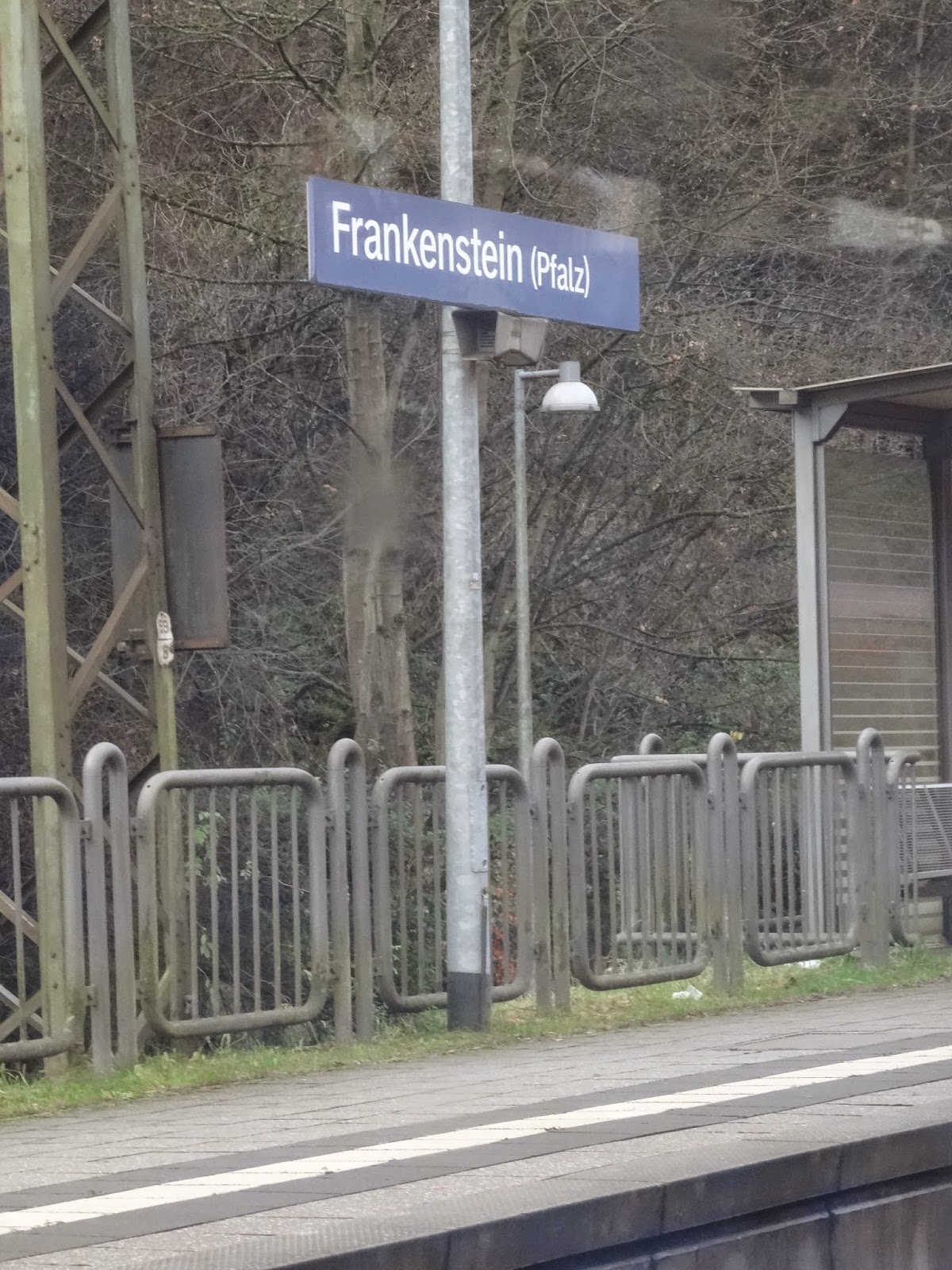 Your eyes do not deceive - that's really
the name of a train stop in Germany! 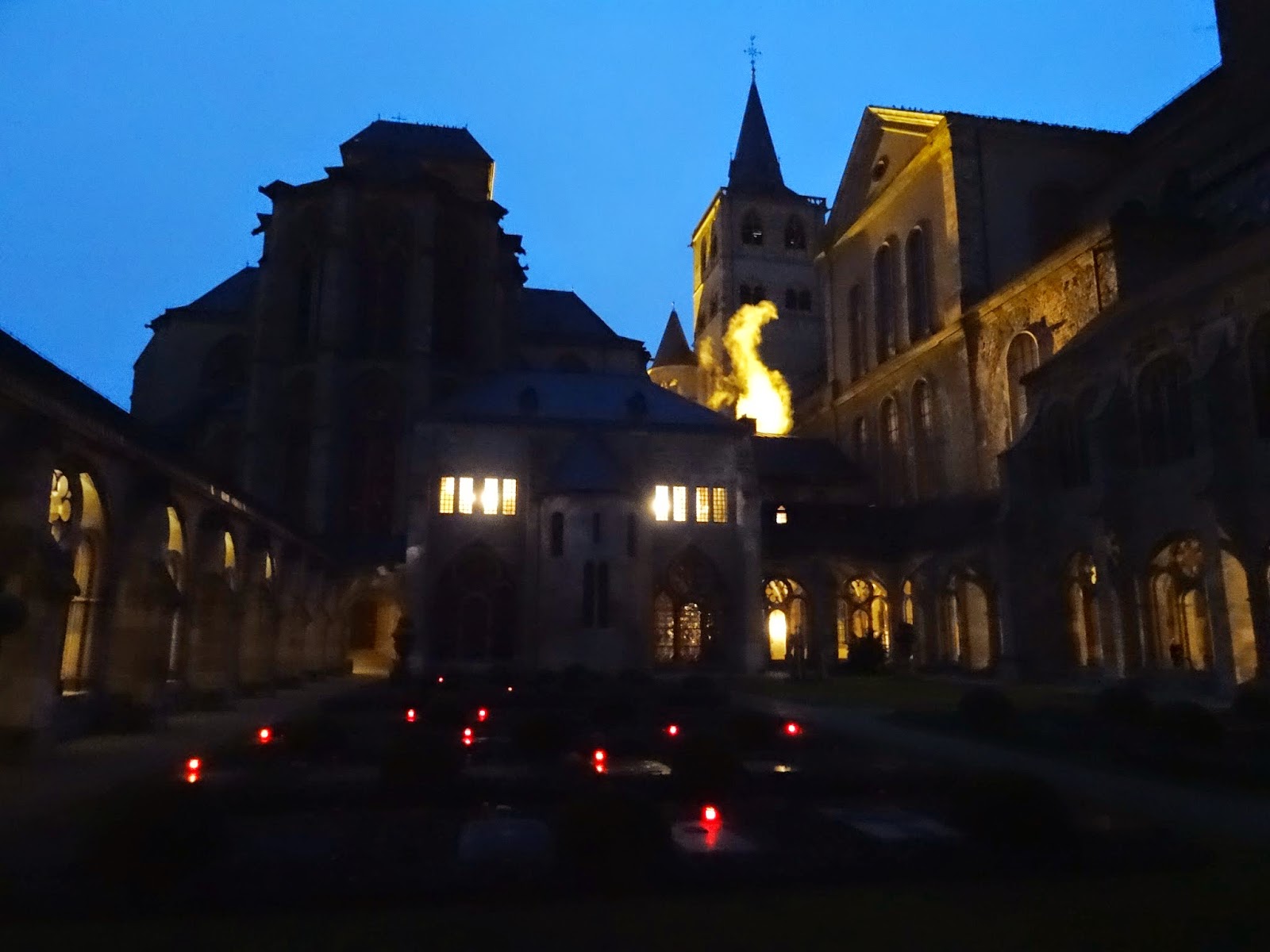 The creepiest feeling place I was in on this recent trip 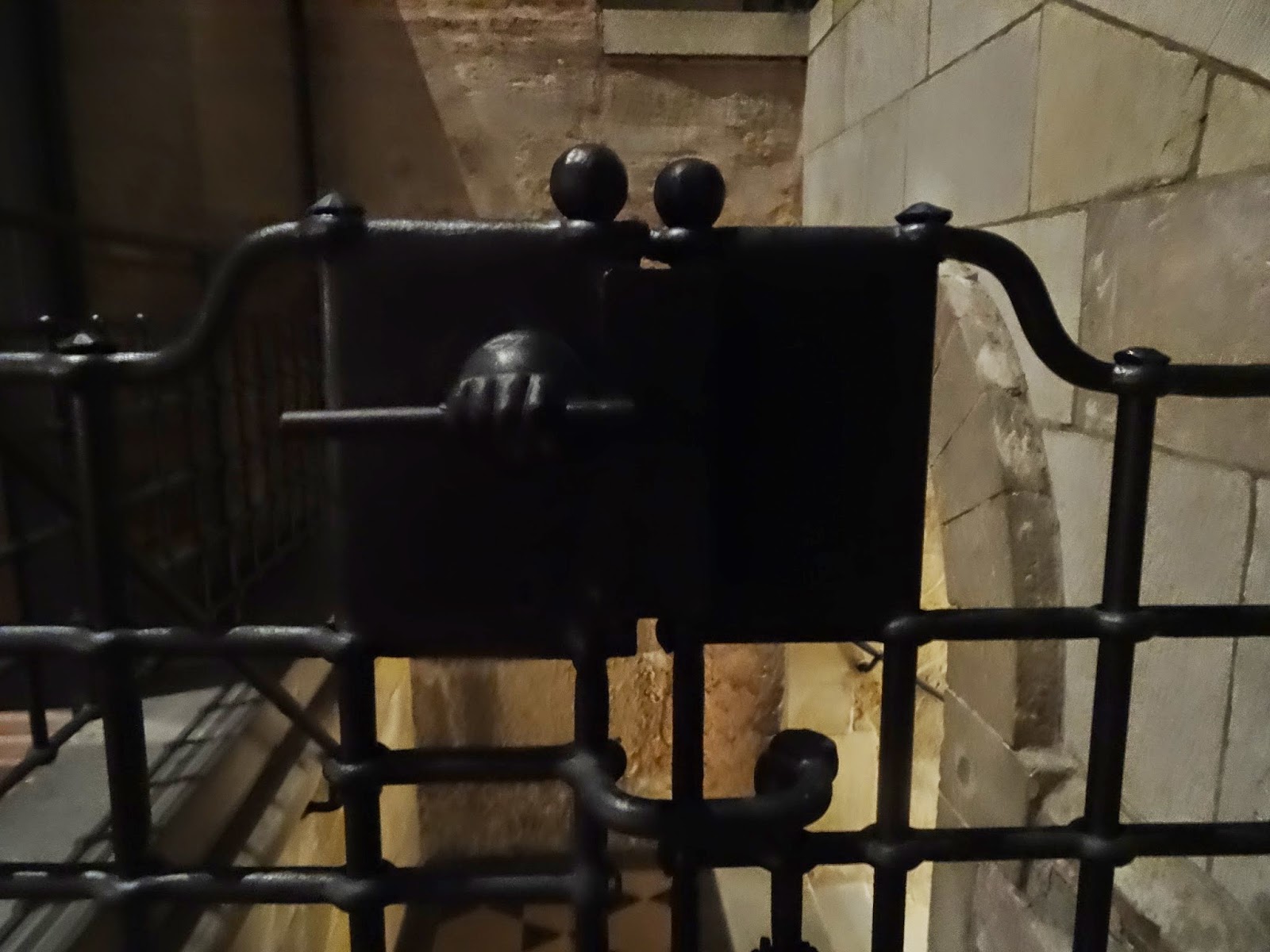 Yes, the cloister pictured in the middle photo is in a complex whose
main building has door handles shaped like those of human hands... :O


As early as the first day of my most recent trip to Germany, I got the feeling of it being "deja vu all over again" -- and I'm not just referring here to the substantial breakfast that my German friend made sure that we would have shortly after I arrived at her home that morning.  Rather, while walking around her neighborhood, I noticed once more that things were so quiet that we could hear our own footsteps -- because there were so few people out on the streets, and ditto re any vehicles!

It was with amusement that we recalled how she had initially been quite agitated to learn that I found the quiet to be at times on the creepy as well as unexpected side.  And I do count myself very fortunate that my German friend doesn't only have a sense of humor but one that can be pretty similar to mine -- so that when one of the trains we took to Trier passed by Frankeinstein (Pfalz), she knew that that fact would tickle my funny bone and, also, that I'd want to take a photo of the railway station's sign for my record!


Incidentally, "frankenstein" means "stone of the Franks" in German -- and since the Franks were a confederation of tribes living in parts of what's modern day Germany, it makes sense that I'd spot such as a gravestone with the words "von Frankenstein" on it in Mainz, and belatedly discover that Frankenstein (Pfalz) is home to Frankenstein Castle (and that that edifice is said to have inspired Mary Shelley to write her Frankenstein).

In any event, I didn't feel scared at all in the brief moments that I passed by Frankenstein (Pfalz) -- and it was only later that day, when my German friend and I found ourselves in the cloister of Trier's UNESCO World Heritage-listed Trierer Dom (aka St. Peter's Cathedral), that I genuinely did feel unsettled and somewhat freaked out!

To understand why this was the case, try to imagine this: a very dark area where many shadows loomed, old (as in dating back to the 13th century) surroundings, lots of graves in the vicinity, a mysterious plume of smoke seeping out from an unidentified part of the building, and the sound of birds loudly cawing that caused my German friend to remark that she was getting reminded of scenes from Alfred Hitchcock's The Birds!

So small wonder then that we made haste to get out and away from that area!  Still, to be fair, we did find much of the cathedral proper -- both its interior and exterior -- to be awe-inspiring... though I also will confess to not caring to spend any large amount of time in its crypt, where were installed the remains of a number of people, notably some of the institution's bishops!! ;(
Posted by YTSL at 11:41 PM

This second entry of your Germany trip is one of your best travel blogs. The links you provide in your text are all worth checking out...Your middle photo of the cloister is "creepy" yet has a mysterious secluded beauty. I didn't know there was a train stop named Frankenstein or a Frankenstein Castle.

The mere mention of Mary Shelley's Frankenstein is enough to inflame my imagination. It has long been one of my favorite books, one that has stayed with me from youth. It is amazing that Mary Shelley finished this powerful Gothic novel when she was only nineteen years old!

Thanks for letting me know you like this blog post. I wanted to point out some sights and sounds that got my imagination running wild while on vacation -- things that others would have missed and/or not thought worthy of much comment. :)

That picture of the graveyard IS creepy, though it didn't feel this ominous in daylight. How come you're traveling to Germany so often?

I unfortunately didn't get the chance to see that graveyard/cloister area in bright daylight but had passed through it an hour or so before I took the photo in this blog entry -- and it wasn't half as creepy then!

You think travelling to Germany twice in around 4 1/2 years is often? My German friend would beg to differ! ;b