After this third and final photo-essay of my excursion to Tung Ping Chau, it'll be time to say farewell to Hong Kong's geologically interesting as well as most remote island.  Sadly, after my two friends and I visited the area and hiked along the 6 kilometer length Ping Chau Country Trail, some sections of it have been blocked by the island's villagers.

So it'll be a while, if ever, before people can go entirely along the route that we went along -- which is a real pity since, as can be seen from this and the previous photo-essays, the hike did yield some interesting and cool sights indeed... 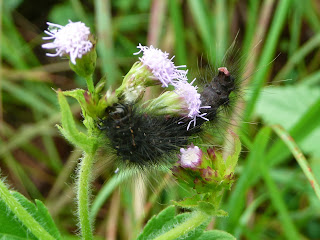 A non-geological sight to begin with -- more specifically,
of a hairy caterpillar embracing a flowering plant! 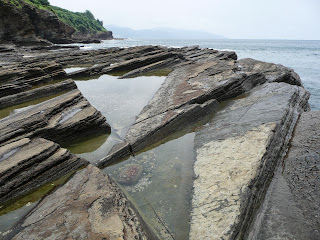 Back to a geological focus -- albeit a photo with
aquatic as well as land elements! 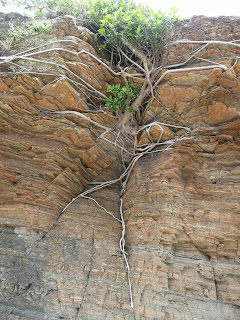 Weird, I know, but don't the roots look like
they've sketched out a skirted human figure? :O 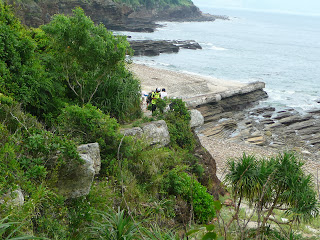 Can you make out the formation known as
Dragon Diving Into the Sea in the above photo? 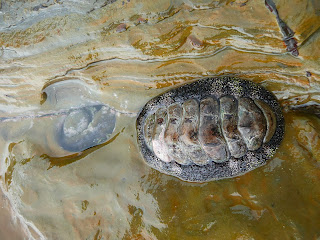 Is this a trilobite -- or its descendent, at least --
that I see in the photo?! 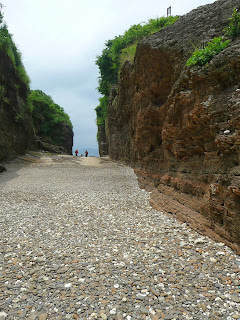 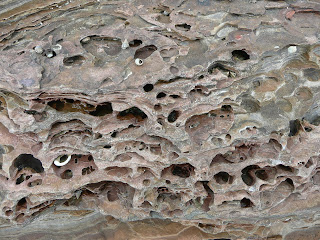 Have you ever seen a geological formation like this? 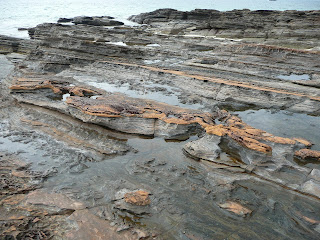 This last Tung Ping Chau photo-essay may be your best one of this island. Anyone with a modicum of imagination wouldn't have difficulty forming metaphors or experience some level of imaginative interaction with them. I know that Magic Cop (a film you gave a favorable review in a previous incarnation) had a few brief scenes filmed here.

The second photo from the bottom of the porous stratified rock could just as easily be a massive sponge, or nearly petrified wood, or even a discarded metal hulk...Third photo from the bottom, the vertical shot of the small gorge, would be a good setting for an epic wuxia film, maybe by King Hu, in which the heroic fighters are dwarfed by nature.

It is the second photo from the top that for me best expresses the sedimentary nature of the island. The wideangle shot gives the layers of rock an inclined look which leads the eye to the land mass in the distance - emphasizing the isolation and loneliness of the island.

Since, as you say, parts of the island are now offlimits, this summer daytrip is all the more memorable and haunting.

Thanks for your lengthy comments on this photo-essay -- and especially for the "Magic Cop" location ID. Hadn't realized that -- though do know that some scenes in "Duel to the Death" also were filmed on Tung Ping Chau. :)

Thanks for informing me that some scenes in Duel to the Death were filmed on this sedimentary island. It makes me like this film even more. I love that film, directed by Ching Siu Tung, for its surreal set-pieces...Ching Siu Tung is my favorite action-fight choreographer. His action choreography in the concluding moments of Dragon Inn ('92), when the characters seem to fight and dance in a hallucinatory twirl in the desert, is why I love Hong Kong cinema. Please excuse this nostalgic flourish.

No excuses necessary for your "nostalgic flourish". And FWIW, Ching Siu Tung's my favorite action choreographer too. Like you, I love "Dragon Inn" -- with other works featuring his action choreography that I like a lot being "Swordsman II", "Swordsman III: The East is Red" and "Peking Opera Blues"! (And yes, it's not escaped my attention that they all have Brigitte Lin in their cast too! ;b)