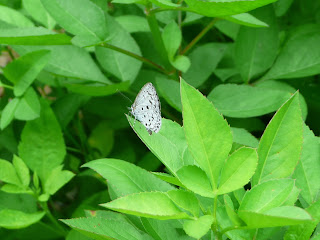 What does this butterfly... 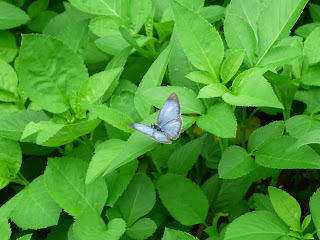 ...and this 'flutterby' have in common? 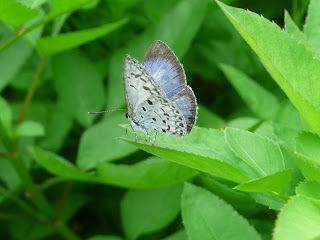 Without seeing this photo, would you have believed that
they were one and the same?! :b

I realize three photo-essays from one single trip to an island measuring only 600 meters long and 200 meters wide may seem excessive to some.  And this on top of the blog entry I posted that same summer's day that I visited Tung Ping Chau.  But as I think you'll agree after checking those photo-essays (further links to them here, here and here), there really were plenty of fascinating sights to be had on that remote Hong Kong island!
As it so happened, among the most fascinating to me was one encountered near the end of the day trip and involving yet another wonder of nature.  While strolling through a green -- rather than rocky-surfaced -- part of the island, a small butterfly with dotted wings caught my eye.  As I readied my camera to take a photo of it, it opened its wings... to reveal ones that were mainly blue on one side and largely white on the other!

Common the Common Hedge Blue may be by name and in terms of its conservation status but I still find it really pretty as well as pretty interesting!  And I hope you will too upon checking out my photos of it on this blog entry. :)
Posted by YTSL at 10:23 AM

Hi YTSL -- Great to see butterflies out! I thought it was too cold for them this time of year?

Actually, yes, it is too cold this time of the year for butterflies. The pics are, in fact, from a hike I went on two summers ago! ;b