One night in Hong Kong 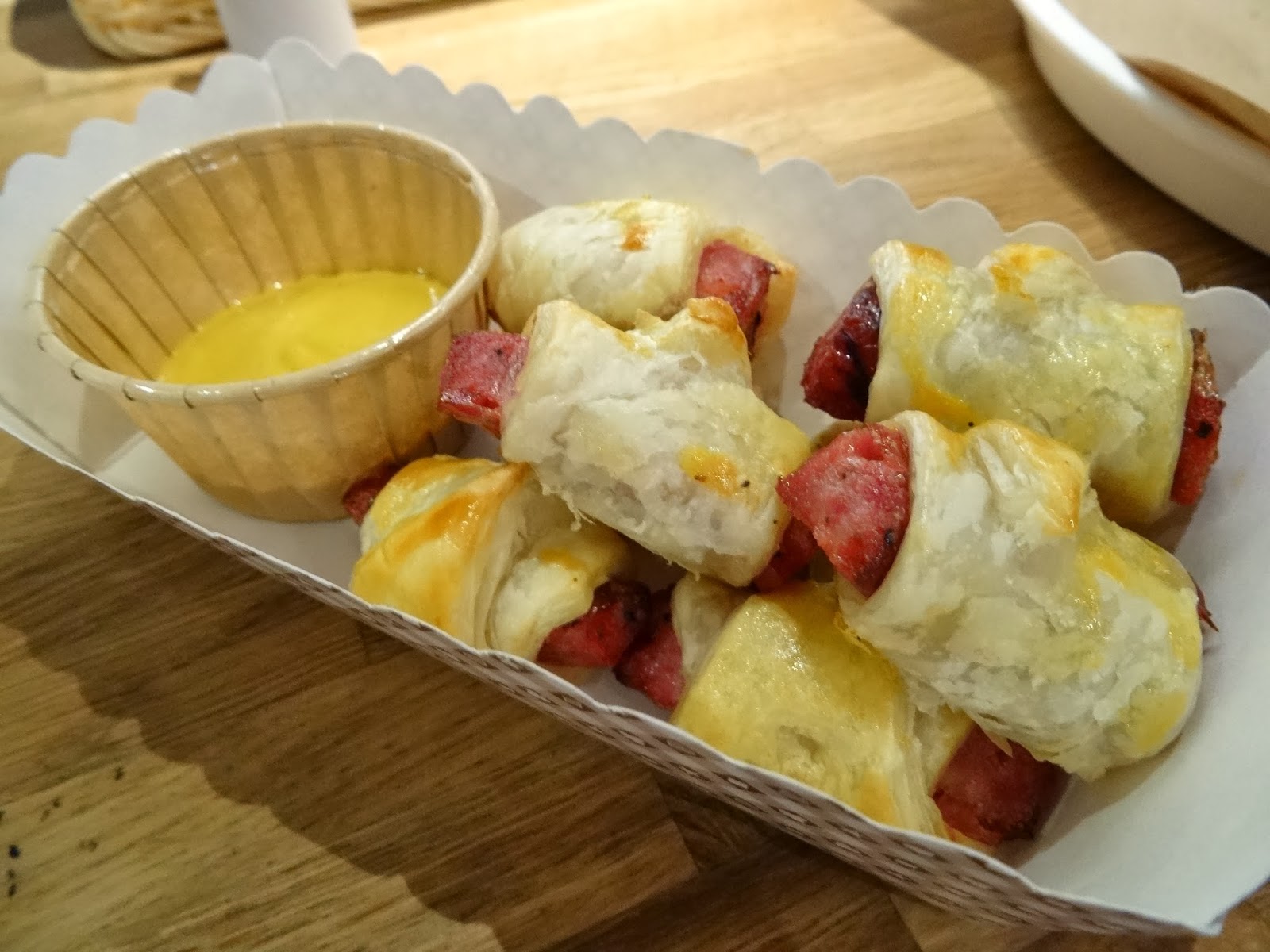 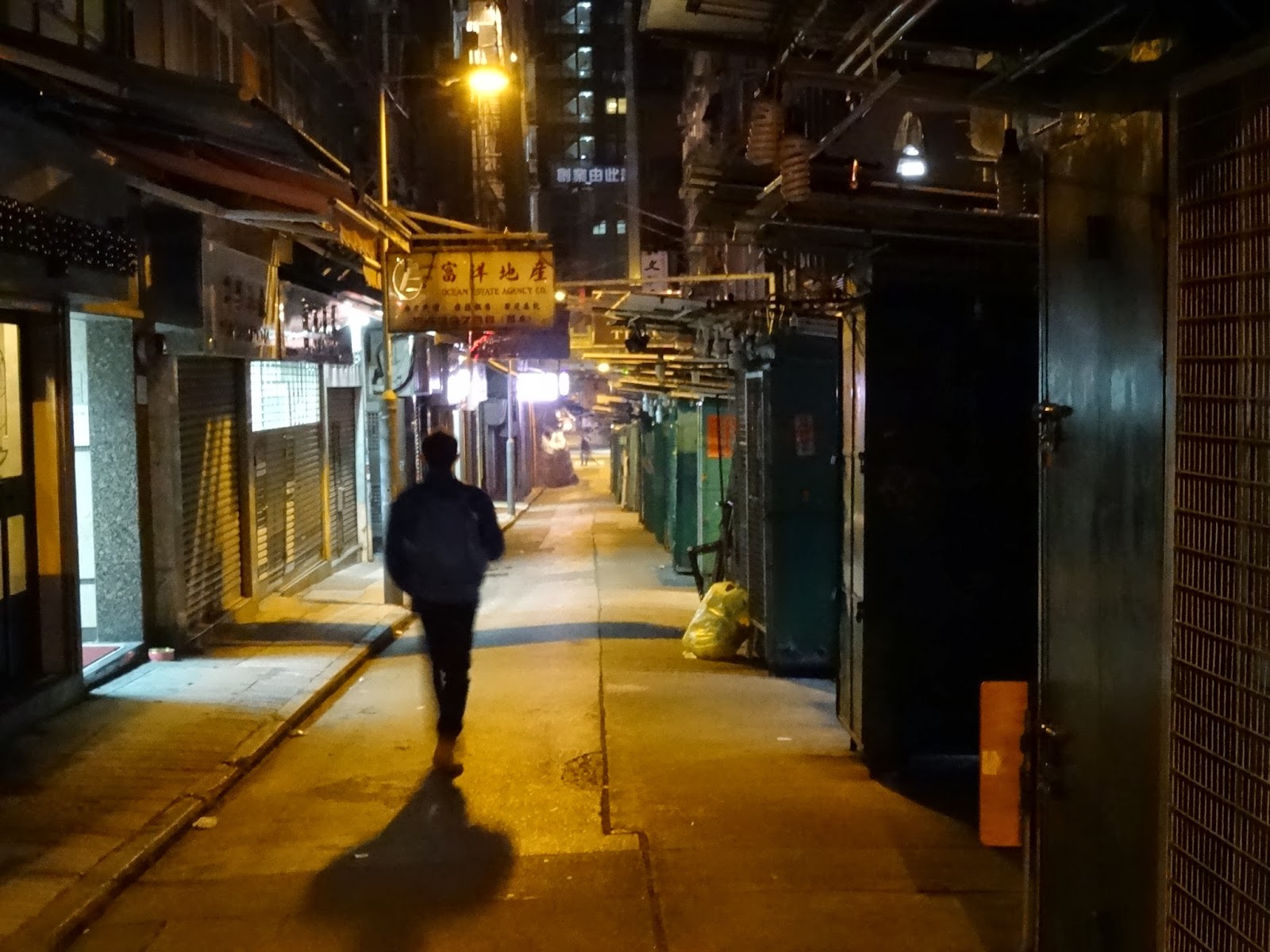 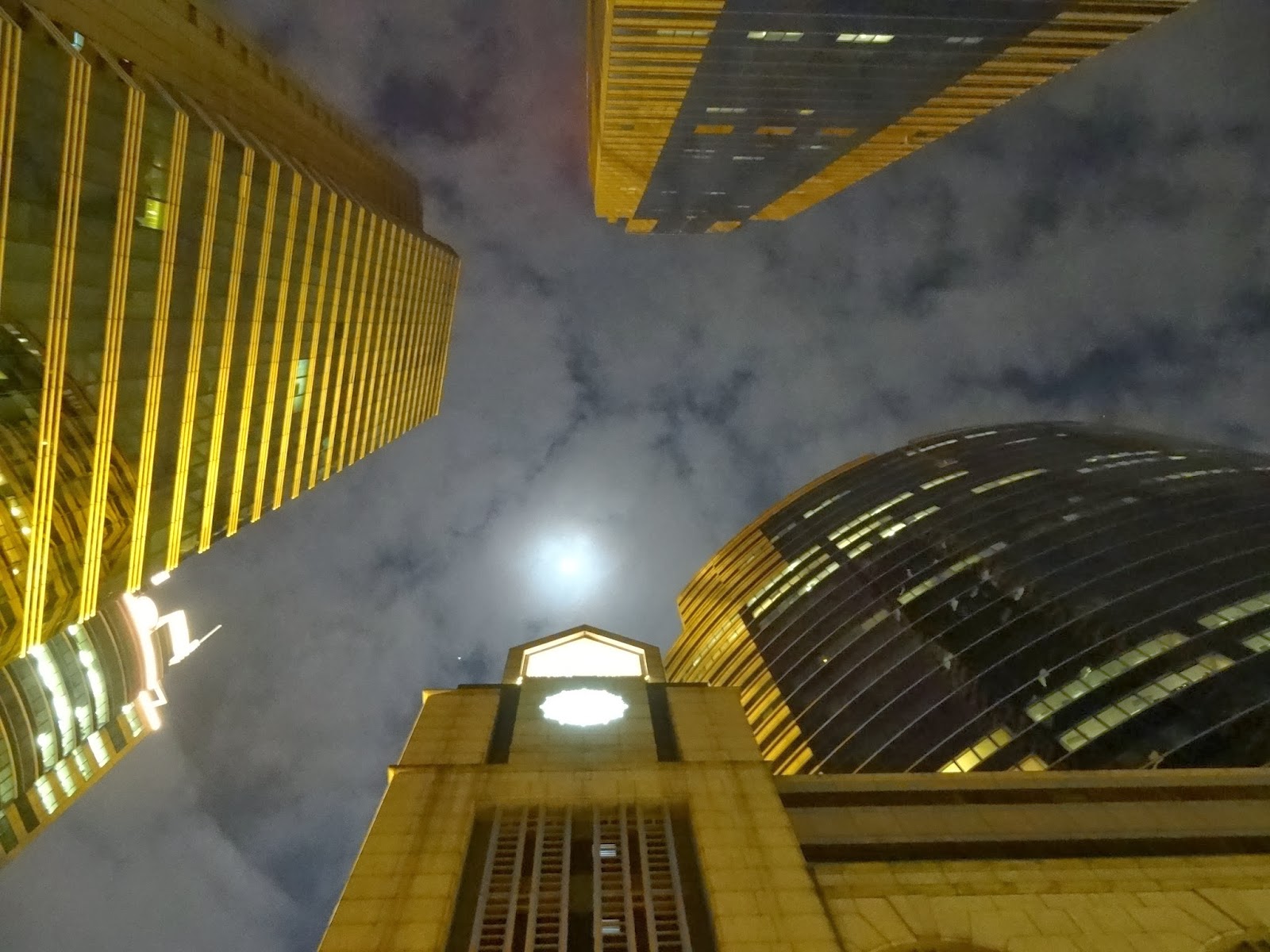 After work one day, the blogger behind The Fragrant Harbour and I went to The Roundhouse for dinner and drinks.  As I told her on our first visit a few weeks ago, if only the food menu was as interesting as its microbeer selection, I could see that Soho establishment becoming a favorite of mine. So, yes, the truth is that we went there again that evening because I was pining to try more microbrews (or craft beers, as they appear to be more popularly known in Hong Kong these days) -- though we definitely did make sure to order some food along with drinks.


Rather than go for the barbecue like I did the first time around, I went for a special -- pigs in a blanket, a dish that I was first introduced to as a college student at Beloit all those years ago.  The microbrews (including a Russian imperial stout and a Belgian lambic) that I had that evening, on the other hand, sent me back to my graduate student days at Penn -- for Philadelphia was where I became a beer geek!


Atmosphere- as well as food-wise, there were moments that evening at The Roundhouse when I felt like I had been transported back and thousands of miles away to the US.  But upon exiting the place, it only took a few minutes outside to be squarely reminded that I was squarely in Hong Kong.

Granted that Soho is home to its share of restaurants serving up cuisines associated with territories as far flung as Australia (Jaspas) and Argentina (La Pampa Argentinian Steak House), and many points in between.  Also, that a small Taoist temple nearby I associate more with a transnational movie with a Thai director at the helm -- specifically Pen-Ek Ratanaruang's Invisible Waves.

But there still is a distinctly Hong Kong air to it as far as I'm concerned -- and ditto (and all the more so, in fact) with Sheung Wan, where the nearest MTR station to the part of Soho we had been in is located. More than incidentally, this atmospheric neighborhood is where much of Johnnie To's The Sparrow was filmed.  And like Simon Yam's character in it, I was inspired to snap some photos there -- and if I may say so, I reckon that at least one of them looks like it could be a still from a movie! ;b
Posted by YTSL at 8:34 PM

One Night in Hong Kong photo-essay is enough to stimulate any city dweller's imagination (or at least mine). You mention Johnnie To's Sparrow in the text, and the middle photo of the lonely street does indeed evoke Hong Kong noirish films, even those filmed in Kowloon or elsewhere...I thought of Derek Yee's One Night in Mongkok or Patrick Yau's The Longest Nite, both pretty bleak HK films.

The night sky in the bottom photo casts a magnetic spell over the tops of the aloof skyscrapers (and also recalls an eerie shot of the sky at the beginning of Chunking Express).

These photos will stay in my mind's database of urban images! Thanks for sharing One Night in Hong Kong with others.

Thanks for the appreciation. BTW, the title of this post was, of course, inspired by "One Nite in Mongkok" -- though, yes, my night was far less bleak than the one experienced by the protagonists of Derek Yee's film...;b

Talking about Craft beers, while I was in Sai Kung a few days ago, I found a store called 'The Bottle Shop', which is full of these beers. They even have vintage ales. They have a website site: http://thebottleshop.hk/shop/ I bought a bottle of 8wired 'Semi Conductor Session IPA' and a bottle of Mountain Goat Hightail Ale'. Both are very enjoyable. Maybe you should visit the store and take a look for their collection. I have to admit I do not recognize most of the brands there.

I've read of The Bottle Shop and walked by it while on the way to dinner in Sai Kung post-hike. Thanks for confirming that it's indeed worth checking out.

Should you ever go there again, could you check to see if they have the North Coast Old Rasputin Imperial Stout?

I love that beer so very much and had given up thinking I'd ever be able to have an imperial stout in Hong Kong but have had good ones one draft from Nogne O (a Norwegian brewery) and Boxing Cat (from Shanghai) at -- respectively at Dickens and The Roundhouse -- in recent months. :)

I'll do that. As for the time being, when browsing their online bear list, they have quite a few of those Nogne O in it. They have: #100, Two Captains IPA, Tiger Tripel, Imperial Brown Ale, and surprise, an Nogne O Junmai Sake. The #100 & Two Captains IPA are current out of stock.

North Coast Old Rasputin Imperial Stout doesn't seem to be on their list now. Why don't you leave a message in their site asking this?

A few notes of the two bears that I have consumed:

8Wired Semi Conductor: the nose showed it doesn't smell like a beer at all. It's like fruit juice. It is not foamy at all, but when you sip it, you'll know for sure it is a beer alright. Very smooth and creamy, with a tang of grape fruit and its citrus. The fruitiness would be more prominent. Its after taste lasts. It was still there 45 minutes after I have the last drop. Suggest NOT to chill it too much. Lightly chilled like Sake should fine for this beer.

Mountain Goat Hightail Ale: This one is also quite fruity, but very different. A bit more towards honey-dew in the back of your palate, but with some Lychee and/or Purple mangosteen feel. Also not foamy, very smooth but a bit less creamy. After taste is just as long, or even a bit longer than the Semi Conductor.

Both beers have a little bit of bitterness in the end, but that would just accentuate the citrus and the fruit. Very enjoyable. Good for sipping as long drinks. It would be a shame to gulp these babies down instead of letting your taste buds and your palate to enjoy their presence.

Lots of craft beers including some local brews. Spotted it while going through the Bottle Shop's site.

Got some traces of Old Rasputin. You should be able to order it through Hopleaf.hk. Unfortunately they are currently out of stock. Listed at HKD30.-

Thanks for the research and info!

Re Hopleaf: I actually gatecrashed one of Jeff's beer tasting sessions a while back and did tell him -- and, separately, the owner of The Roundhouse and Joel of Stone's -- about my North Coast Old Rasputin Imperial Stout love.

The thing is that I really prefer draft beer to bottled or canned beer. So I'm trying to see if there's a chance of getting the Old Rasputin on draft -- but since this winter's almost over, I guess I'd have to wait until the end of this year, at the earliest, to have that wish fulfilled!

Interesting comments re how the two beers you bought tasted. I've noticed that citrus-y notes on a few IPAs I've recently had. Have to say that I don't particularly care for that.

In return, I did some on the two beers you bought -- interesting that you opted for a New Zealand and an Australian beer. Do you have a particular preference for the beers of Antipodes?

Those two were recommended by the staff of the shop. I think I would try the Yin & Yang of the Evil Twins next time I'm there.

Ah, draft are certainly much better as most beer are best when they are fresh in the barrel. However I do want to try some aged ale. I have been told they are exceptional.

As for the time being I have not tried any beers of Antipodes. I am actually new to craft beer. However I would enjoy tasting more of them.

I had to look up what the Yin & Yang of the Evil Twin(s) is -- haha, to think that's the name of a beer! Haven't had it - but have had black and tan beer before.

For me, it's okay -- but my favorite beer types are actually Imperial Stout, Mild and Pale Ale (the latter, particularly American ones using cascade hops).

Re beers from the Antipodes: yes, you've tried them already -- I meant beer from Australia and New Zealand, you see! ;b