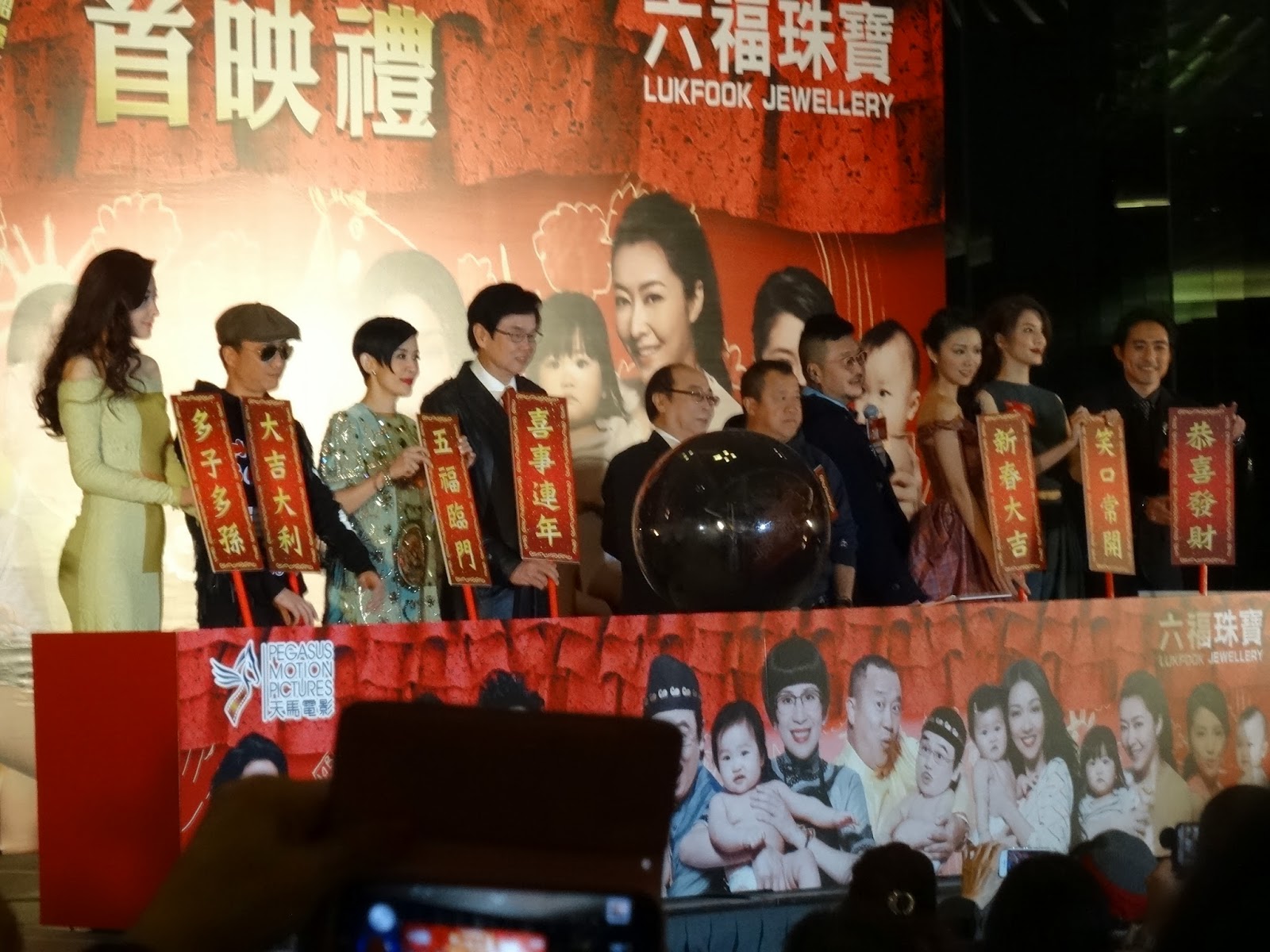 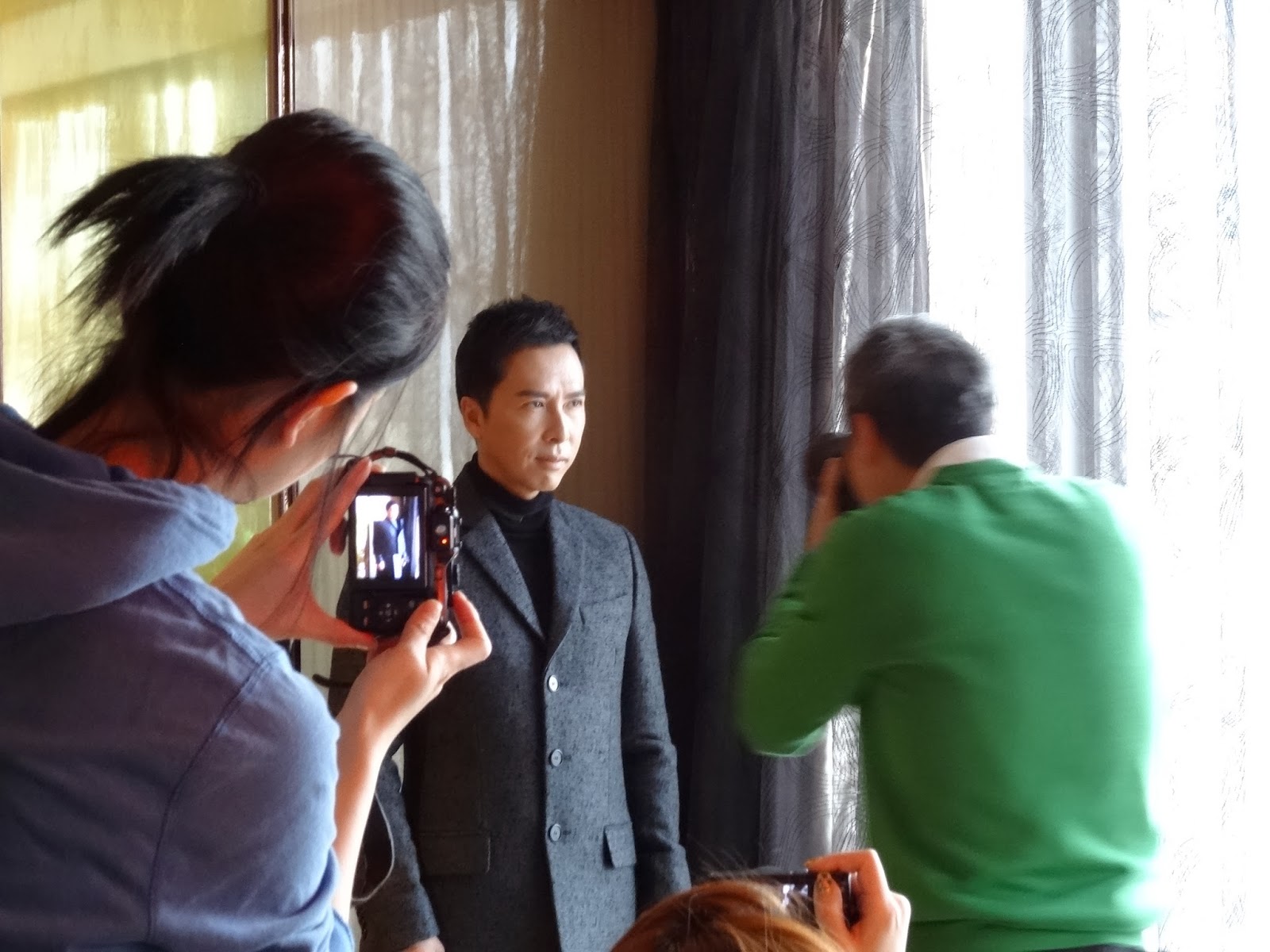 The star of The Monkey King minus monkey make-up! :)

In recent years, Raymond Wong and Eric Tsang have been associated with rival Chinese New Year movie series (namely, the All's Well, Ends Well films that date back to 1991 in the case of the former and I Love Hong Kong trilogy that began in 2011 in the case of the former).  And for a time in late 2012/early 2013, there had been talk that the two Hong Kong film industry veterans would join together to make a Chinese New Year movie.


But while Raymond Wong mentioned in an 2013 interview that he considered Eric Tsang to be his best friend, we've had to wait until 2014 to see them together on screen in a Chinese New Year movie. Considering how hotly anticipated their collaboration has been in many quarters, it's a bit of a disappointment that the Chinese New Year movie in which they appear as rivals who vie to be the first to have a grandson is not as funny and special as was hoped.


On a more positive note, it's not as though Hello Babies is entirely bereft of laughter-inducing moments.  Still, it's just surprising that there's not only more of them but that the bulk of the guffaws generated come courtesy of the movie's other stars -- notably Sandra Ng, Ronald Cheng and Fiona Sit.

To be sure, Eric Tsang does have a super scene alongside Sandra Ng in which they parody the train station fight in Wong Kar Wai's The Grandmaster.  Still, my favorite scenes in this movie are those that have a yogi played by Jan Lam getting Fiona Sit to strike up the kind of sexually suggestive poses that has her character's hubby (played by Ronald Cheng) all jealous as well as heated up!


If only there were more inspired moments like those in the movie.  Instead, and rather sad to say, there's a very workmanlike feel to this Chinese New Year comedy that is less zany than movies of this genre but, alas, expectedly loosely structured!


To put it in context then: Hello Babies is not as funny and generally good as Hotel Deluxe, last year's Chinese New Year movie from Raymond Wong's stable.  At the same time, it serves up enough laughs that those who opt to check it out this holiday season aren't going to walk out feeling like they had been cheated or anything like that!

Whereas the makers behind Hello Babies appear to not have been all that ambitious with regards to their film, the equivalent folks behind The Monkey King certainly didn't lack any ambition.  Some four years in the making and with a budget that eventually rose to HK$600 million,  there's enough in the finished product to indicate that it was meant to be a visually spectacular fantasy epic.

However, those who opt to check out this cinematic imagining of the early chapters of Wu Cheng'en's Journey to the West truly would be best served by looking upon it more as a children's film than a serious envisioning of one of the Four Great Classical Novels of China.

After getting negative reports from a few parties about this fantasy actioner, I went into a viewing of this film that shows the Monkey King enjoying himself on earth and also wreaking havoc up in the heavens with way lower expectations than I normally would for a cinematic product with as large a budget as it does.  And I can confirm that it does indeed look like certain sections of the film's CGI are being shown without their actually being fully polished, if not outright completed.

At the same time, the reports of its script having inane dialogue are, to my mind, on the unfair side.  Also, I really have to congratulate action director Donnie Yen not only for some interestingly envisioned and enacted action scenes but also Donnie Yen the actor for being the most simian Monkey King I've ever seen on film -- and, also, the one that most conforms to the vision of Sun Wukong that I've had ever since, as a child, I eagerly devoured all 40 volumes of an illustrated Journey to the West series that I had been given.


While watching the film though, I got to thinking that this 16th century tale has many details that's hard to take seriously now that we're firmly in the 21st century.  Also, that much of this film's visuals are too much like that of a video or computer game, supplemented with 'fantastical' creatures that are too obviously humans in furry costumes.

On a related note: I can't help but think too that if The Monkey King had been faster paced, I wouldn't have noticed and fixated so much on these kinds of things. Even then, the ambitious work really is nowhere near the disaster or even mess than some critics have it being.  Or perhaps I'm being generous -- but, then, that's what happens when I watch a Chinese New Year movie -- which, by dint of the timing of its release on Chinese New Year's Eve, even if nothing else, this blockbuster offering is!

Happy Chinese New Year! Good to read your reviews but not so great to hear that both Hello Babies and The Monkey King aren't particularly good. Have you seen Sandra Ng's Golden Chicken 3 (SSS?!) and Wong Jing's From Vegas To Macau? I have heard some good comments about the former.

Haven't seen those two other Chinese New Year movies yet but have a ticket for a screening of "Golden Chickensss" tomorrow afternoon. As for "From Vegas to Macau": I wasn't impressed by its trailer but two friends who saw it liked it, notably because of Chow Yun-fat's presence in the movie!

So Golden Chickensss scores a 7.5 from you (which is the same as what you gave American Hustle). So it's pretty good then. That's good to hear.

Have you seen From Vegas to Macau yet? Very interested to find out what score you gave it!

You can see the score I gave "From Vegas to Macau" -- or, better, read my reviews of it and "Golden Chickensss" in this entry:-
http://webs-of-significance.blogspot.hk/2014/02/golden-chickensss-and-from-vegas-to.html

Well, I was actually going to ask you whether you were going to write reviews for the remaining 2 Chinese New Year local releases. So thanks!!

Have to say that I did this in large part for you! It's nice to know there's a reader out there who wants to know my views about the movies! :)

I am so very honored and appreciative of what you've done. Looking forward to reading your reviews of the HKIFF later this year... : )

Hehehe... thanks for the gentle encouragement! ;b

Can I know where can I watch this movie online?

I'm not sure which movie you're referring to but in any case, my policy is to avoid watching films online as much as possible.