A by-the-numbers look at my 2013 movie viewing year 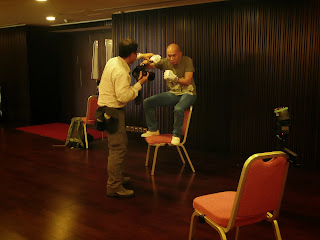 Dante Lam, the director of Unbeatable -- one of the films
I rate as 8.5 or above on the brns.com scale -- has his
pose adjusted by a cameraman at a photography session 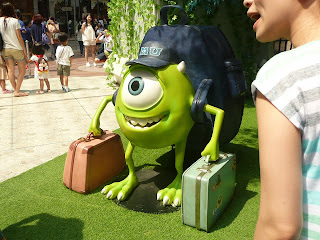 One of the stars of a number of American and animated movies
I viewed in 2013 makes an appearance in Hong Kong! ;)


And for the record: yes, quite a few of the 2013 statistics -- including the total number of films I viewed, as well as the total number of American movies I checked out this year -- are significantly different from the previous years.  And should anyone wonder, this has to do more with the nature of the job I now have -- rather than my personal preferences... ;S


0 -- The number of times in 2013 that I viewed Peking Opera Blues, the Hong Kong film that I'd nonetheless maintain is my favorite movie of all time


6 - The number of animated films I viewed last year

13 - The number of documentary films I viewed in 2013 (including Hong Kong's One Tree, Three Lives (about Chinese-American poet Hualing Nie Engle), My Way (which focuses on two young men who want to play female roles in Cantonese opera) and Sunless Days (made in the aftermath of the Tiananmen Square Massacre))

1929 -- The original year of release of Man with a Movie Camera, the oldest film I viewed last year

HI YTSL -- Wow that's a lot of numbers! And you keep some interesting statistics! Are you sure you're not some closet accountant?!

1) Regarding the number of different territories whose films you viewed last year, shouldn't it be 32? (I see that Australia was not included.)

2) Regarding the BRNS scale, the link takes me to the website but I can't seem to find the scale. Is there a direct link to the scale?

3) Regarding Summer Snow, did you see it on DVD? It does not seem to be available at any actual or on-line shops in or outside of HK, and so I am very curious to find out if you got to see it because of "the nature of the job I (you) now have"! : )

Trust me, I'm not an accountant -- closet or otherwise! Note that I had to correct one stat after Samson pointed out my mistake below!

1) You're right - and have duly made the correction!

3) Don't scream but I had the good fortune to see "Summer Snow" on a big screen at the Hong Kong Film Archive as part of its 100 Must See Hong Kong Movies programme -- and for the record, it was for fun rather than work!! ;)

Over 200 films. I am amazed your head hasn't exploded. Or you haven't gone blind. Or grown a second rear-end. Still there are worse jobs. Lots of them. In fact, almost all of them.

And AAHHHHH!!!!! I am SO jealous that you got to see Summer Snow on the big screen.

And judging by the fact that you haven't seen the Lan Kwai Fong films, I am guessing they are actually not part of the 100 Must See Hong Kong Movies programme?! ; D

Another stat: my average is 4 films a week. And re there being worse jobs: I know but it's all not roses or great movies -- maybe next year, I'll include a stat of movies I've viewed in 2014 that I'd rate as a 5 or lower on the brns.com scale for people to see!

Even better than watching "Summer Snow" on a big screen -- especially if you're a fan of Josephine Siao -- is watching "Nobody's Child"... ;)

Happy New Year! As ever, I am impressed by how many movies you see! It's interesting to read the breakdowns. So glad that you had such a good proportion of good movies in that total you watched.

And as ever, I'm realizing that I don't see a lot of movies! And especially not a lot of new movies. We have been watching movies at home more often this year, but they (unsurprisingly) tend to be weighted more to the kid-appropriate movies.

Hope that this year sees an increase in viewings of Peking Opera Blues over last year!

I agree with the other comments here - it an impressive number of films you've seen. Seeing all these films would be an endurance test for most of us, especially seeing all those 3D films. Viewing Gravity made me nauseous, dizzy and left me with a three day migraine (I think they might be filming these at a faster FPS).

The late New York film critic Andrew Sarris was known for seeing an incredible number of films.
Before it's over, you may be in class with him as a certified cinephile.

How many films do you think you watch a year? Also, when you say new films, you mean films released in 2013 or films you were viewing for the first time in 2013?

Given a choice, I have to admit to not only preferring to view fewer films in a year but also more films that aren't from just the years 2012 and 2013. For while I wouldn't say unequivocally that old is better, there really are a lot of classic films that I've yet to check out and want to some day!

Wow re your reaction to viewing "Gravity". I have to say that that film I got the chance to choose to watch in 2-D -- and yes, when given the choice, I prefer to watch a film in 2-D rather than 3-D pretty much every time!

"Also, when you say new films, you mean films released in 2013 or films you were viewing for the first time in 2013?" I probably meant mostly the latter, but the former applies as well. I think I may watch an average of a movie a week (we often have a movie night at home with the family on a weekend night, and occasionally John and I will watch something not kid-appropriate after the kids go to bed). As for 2013 movies I've seen, the only one that comes to mind was "Frozen," but I feel like there must have been at least one other movie seen in the theater. Oh, right, "Despicable Me 2." I was pretty disappointed in that one. Frozen had some good points, but I wasn't wowed. We saw a couple of other 2013 movies after they were released to video (and we downloaded or rented them).

We do sometimes see new-to-me-but-older movies, as well. And then a lot more rewatching! I should really keep better track--I'm curious!

Re "Frozen": I actually was more wowed by the short film that preceded it much more than the feature attraction! Re "Despicable Me 2": I actually haven't seen it yet but am surprised by your reaction since the minions are a major hit here in Hong Kong!