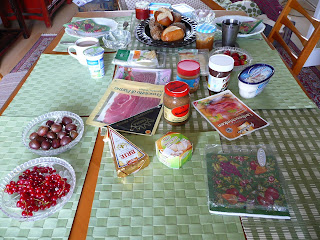 The regular breakfast spread laid out
at my German friend's abode
"Where are the food pictures?" queried A Pessimist is Never Disappointed's Glenn on the comments thread for the blog entry before this one. The short answer to that question is that I actually didn't take that many photos of food in Germany -- not because I didn't enjoy the food I ate in that country but, because, well... the culture vulture and beer geeks part of me prevailed over such as the foodie part of me on my German holiday.

Put another way: rather than make pilgrimages to famous restaurants in Germany, I often preferred to make a beeline for famed museums... and brauhauses and biergartens. Furthermore, to make more time for those visits, my German friend and I ended up having lunch in one museum cafe and the majority of the rest of our meals in brauhauses and biergartens. (More than incidentally, my German friend -- who doesn't actually drink beer but knows full well about my love of beer -- told me near the end of my visit that she reckoned that she had been in more brauhauses and biergartens in the one and half weeks that I visited then she had been in the previous fifteen years of her life!)

Yet another reason for my relative disinterest in eating while out touring was that we would regularly start the day with a big -- I'd even say huge -- breakfast: one that invariably included a selection of amazingly textured and substantial slices and/or rolls of bread, creamy butter, various spreads (including, at her home, home-made strawberry jam), cuts of cold meat (including yummy -- and surprisingly bargain-priced -- prosciutto) and cheese (I particularly loved a brie-like German soft cheese that had mushrooms embedded in it), cold fish options and also fresh fruits (such as gooseberries, red currants and strawberries) in season and, if one wanted, muesli!

More on the bread: One morning, my German friend told me we had the option of having a ten minute breakfast before rushing to catch an early train or taking a later train and thus having time for a more leisurely breakfast. My reply was that there really wasn't much choice as far as I was concerned -- since the bread we had for breakfast was so thick and substantial that I needed a few minutes to chew each mouthful of bread before I could safely swallow it! (Not that I'm complaining, mind -- in fact, I'd stress that it's actually the opposite since I think that German bread really is so very wonderful! ;b )

Haha, that's quite a spread!

The only time I'm really a breakfast person is when I travel. Maybe because at home I eat in the car on the way to work?

They say that breakfast is the most important meal of the day - and having seen this spread I believe it! What a delicious experience it must have been.

Indeed re it being quite the spread! ;b

Re breakfasts: I love them but yeah, find myself eating less and faster at them than I like on work days... ;(

It definitely was delicious -- and the hotels we stayed at had pretty good spreads too. Have to say that all in all, German breakfasts are up there with English, Japanese and Malaysian ones for me -- and a darn sight better than the too light French "continental" breakfasts! ;b

A delightful and filling breakfast--much superior to the lumps of cholesterol and grease that gets piled into a "full English (Irish, Scottish) breakfast.

Germany: the land of breakfast, beer and cathedrals.

This has been a lovely series of posts, comparable to those you did from Korea which I thought were great.

Wow and more wow. What terrific choices for breakfast. Yummy looking. Where does one begin to eat such a feast....the fruit, the rolls.....

Also, yes, German breakfasts are great -- but I actually love English ones too. At boarding school, they were by far the best meal of the day and I regularly had three course breakfasts: bacon (or sausages) and egg (fried or scrambled) with baked beans, then toast with marmite or jam, and then cereal (e.g., Rice Krispies)! ;b

And I'm glad you like my German series of posts along with my Korean and Hong Kong ones. :)

I start with the rolls, cut them into half, put the wonderful butter on them and then... pause to decide whether I'd top it off first with meat or cheese first and then... I think you get the picture! ;b