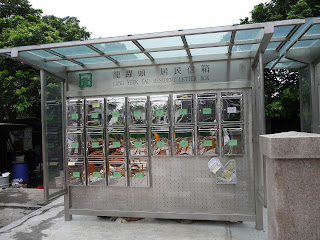 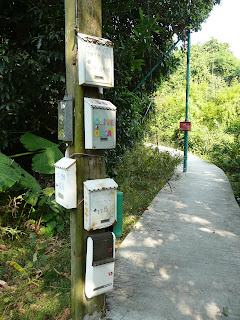 When people think of Hong Kong, a bustling, vibrant metropolis is usually what comes to mind. And as this short video shows, there are good reasons why people think it is. But as my numerous Hong Kong hiking blog entries show, The Big Lychee also does possess large swathes of protected countryside. Indeed, it has been estimated that about 38% of Hong Kong's land has been designated as a country park or special area.

At the same time, it often seems to go unnoticed or un-noted that altogether some 75% of Hong Kong is countryside (as opposed to dense concrete jungle -- and with little suburban space in the equation). And while the New Territories does have its share of sprawling "new" towns like Sha Tin and abandoned old villages, it also still does possess a number of inhabited villages that have yet to morph or been incorporated into big towns.

So what does all this have to do with this week's Photo Hunt theme? Well, while out hiking (or walking along such as the Lung Yeuk Tau Heritage Trail), one of the things about village life that have caught my eye and which I reckon is really charming are the designated village letter box areas and individual household letter boxes awaiting the delivery of letters to people who are able to enjoy remarkably low density living (by the usual Hong Kong standards), yet feel assured that their mail still will be delivered -- and undoubtedly in a timely fashion too!

And while on the subject of the delivery of letters and other mail to rural residents, here's highly recommending Postmen in the Mountains, an elegaic drama about an aging mailman and his son who is due to take over his difficult but scenic postal route. One of my favorite films from Mainland China, it is a quietly charming work which allows inner beauty to shine through as well as beautifully captures the distant Chinese locales that don't often make it onto celluloid but should. :)

What a great idea for the theme. Your posts are always so interesting and I enjoy learning about Hong Kong.

Letters. I wonder if we will be talking about letters in a hundred years. As always, interesting. Take care.

Good images. I went with correspondence as well :)

I missed getting snail mail. I love tearing open the envelope to read the contents. An occasional postcard is a treat. :)

I'm very interested in the movie you recommend, I'm going to look for it in the video store.

Again very interesting ! and I appreciate that it is not only written in chinese ! Imagine when I was in Greece, I was looking for a street but all street names and sings were written in Greek !! of course I never found the place, people in Athenes were not very tourist friendly !

beautiful shots! I love the mailboxes.

Lovely entry for the letters theme. The film sounds quite interesting too. I'm afraid with email eventually the need for postal services even in the rural areas will one day be gone.

Hi YTSL, great photo and a wonderful take on the theme. I love seeing all the mail boxes on that post. I did not know that 75% is countryside. I learn so much from reading your blog.

Thanks so much for sharing. Have a great weekend.

Thanks for reading, looking AND appreciating once again. :)

I know what you mean. It's been a long time since I got a handwritten -- nay, even typed -- snail mail letter that was not spam mail. :S

So we have corresponding photos -- or at least takes on the theme? ;b

Hope you'll find "Postmen in the Mountains" and enjoy viewing it. :)

Yeah, it's a real boon that Hong Kong has a lot of Romanised as well as Chinese script! :)

I miss snail mail to some extent -- but also love that e-mail is so much faster! :)

I do like how the letter boxes look as well as their function. :)

Yeah, what you have in Hong Kong is a lot of people compressed in a relatively small part of the territory -- and then large chunks of greenery to escape to on beautiful weekend days! :)

Those are very interesting and unique letter boxes. I really like this take on the theme and showing the different views as you do of Hong Kong.

I went out to see if Netflix (DVD movies by mail in the US) had a copy of the movie available - it doesn't. :( I have another store that has a good supply of international movies and I'll look for it there.

love "Postmen in the Mountains" and second the recommendation.

Not to bring a downside to handwritten letters but I have a friend who insists on it, but luckily only writes once or twice a year. I say luckily because she writes in a tiny and rather florid cursive style so I need a magnifying glass and lots of patience to read it. I tend to type my responses, my handwriting, through lack of regular practice, has disintegrated.

How interesting. I didn't realize that there was so much country around Hong Kong. Same with Philadelphia actually.
Thanks for coming over and visiting me too.

Oh dear re "Postmen in the Mountains" not being available on Netflix. If there's a Chinatown near you, maybe you should try looking for the film in a video store there?

Thanks and good to see you back Photohunting! :)

Re handwriting: I'm convinced that my higher grades at college (vis a vis primary and secondary school) are in part due to my having papers to type as a large part of my projects! ;S

For Philadelphia: hmmm... if you include the Poconos and such. But you'd have to go past lots of suburbs and small towns first to get there... (BTW, I lived in Philadelphia for about 11 years! :b)

The letter boxes are so small and dainty. What if I want to send you a bix parcel?

My husband has been showing me a photo of that fat 3 year old China boy, have you seen it?

I thought the top picture was a bus stop at first glance! :) I love the pole with letter boxes distributed all around.

I guess if you sent me a big parcel, I'd have to collect it from a post office branch near me!

As for the 3-year-old boy: sorry, have no idea which one you're referring to.

Teehee re your assumption re the first photo. Am glad I included comments as well as photos in the entry! :b

The reflections in the mail boxes in the first photo add depth and color which to my mind makes adds more interest to your photo.

Agreed about the reflections! Glad you like that touch to the photos too. :)

What charming letter boxes on the pole there. Only in HK.

Only in Hong Kong? Really? Really cool if so. :)

wonderful take on the theme!

Glad it meets with your approval. :)