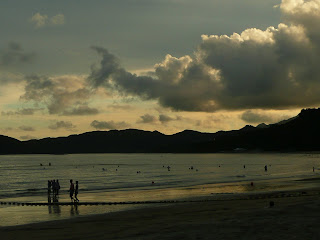 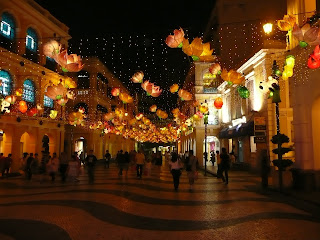 As the proverbial "they" say, "It is darkest before dawn". But since I hardly ever get up in earnest at that time of the day, I have no photos of those wee hours to share with you!

Alternatively, as those of you checked out my Photo Hunt entry last week will have realized, I love taking sunset photos. And longer term visitors to this blog also know that I often have my camera out at dusk -- that time of the day when the sky may not be beautifully orange but there still is enough light for the darkened world to show (or at least hint) at its visible charms. In addition, after getting my current camera of choice (the thus far truly trusty -- touch wood! -- Panasonic Lumix DMC-TZ2), I've become more inclined to take night shots.

Consequently, here's offering up both a dusk (or would it already be considered twilight?) view of Lantau's Lower Cheung Sha Beach and one of central Macau still decked out with lanterns one October evening (despite the Mid-Autumn Festival having taken place in September -- but never mind since the festive lanterns sure do beautify as well as light up what otherwise would have been a dark scene and night!). ;b

both are very beautiful captures!!

love them both! Great for the theme!

Those are both beautiful shots. I love the dark cloud formation over the water and the city is so lovely at night. Happy weekend!

Hope you have a fun and safe Halloween weekend.

i am also using a Panasonic Lumix camera but couldn't remember the model number.:p

Hi magiceye and ancient one --

I like the way the mid-autumn festival gets celebrated in Hong Kong and Macau. Just wish the weather would feel more autumny when it gets celebrated as it often turns out to feel more like summer than autumn... ;(

Re your camera number: take a look at your camera -- the info should be visible somewhere on it. ;b

I love dusk. It is one of my favourite times of the day.

beautiful shots!! i like the lamps hanging over the plaza in Macau. happy weekend!

Love pictures at dusk...it is a magical moment. Great shots for the theme!!

Nice lanterns is it a special festival?

i like how the colourful lanterns adorn the streets in Macau. did you take the shot at Senado Square?

Two great photos. I love the contrast between the vibrant street scene and the tranquil beach. Have a great weekend

Great shots for this week's theme. The contrast between the clouds and the sky is particularly interesting.

Both lovely shots for the theme. The festival sounds fun :)

Both are very nice. I love everything about that twilight shot. Happy weekend

Hi YTSL, two very beautiful photos for this week's theme. I love taking sunset photos too. I love the cool lanterns in your second shot.

I really love the second photo of the festival. The small little lights along with the flowers lights are beautiful. Thanks also for information on your camera. I have an older Canon elph that is still going strong but I'm been looking at the Panasonics as a potential alternative.

In some parts of the world, dusk is not great as that's when the mosquitoes come out in force. Fortunately, there are plenty of other parts in the world where that's not case!

Actually, I think it's more the sky readying for a sunset in the first photo... ;b

Thanks, me too and happy weekend to you also. :)

Er... Mid Autumn Festival? (There's a link embedded in my commentary as well as the commentary itself.) Didn't you celebrate the festival when you were in Malaysia?

Close -- it was on the avenue leading from Senado Square. :)

Now that you've mentioned it, I like that contrast presented by the two photos too. :)

Thanks -- and I also like the black silhouettes of humans, hills and such in the first photo... :)

When I was a kid, I used to participate by way of having a lantern of my own to parade around with. These days, I'm content to look at lanterns -- but yes, it's a fun festival - for young and old. :)

Plenty of happy Aussies everywhere? But yeah, Hong Kong can seem full of them at times! ;b

You're welcome re the camera info. Happy to pass it along as two camera expert friends had recommended the range to me -- and I'm glad they did. :)

Awesome shots. I love the Largo do Senado street. The colonial buildings are so beautiful. But I haven´t seen it with all these amazing lanterns!

Love the sunset at the beach you shot. Beautiful clouds :)

FWIW, love the look of that section of Macau with or without lanterns! :)

Glad you like that photo. Hope that you'll get the opportunity to take a shot like that from that same spot when you visit Hong Kong again. :)

Nice "dark" pictures ! like the last one looks so full of atmosphere

Macau's old town center is indeed atmospheric -- especially with the lanterns about that evening. :)