*Sob*! As I write this entry, my previous German photo-essay had attracted a grand total of zero comments on the blog itself.* But since I've received a few e-mail and verbal comments about it, I'm going to go ahead with putting up more German-themed photo-essays because, frankly, I did take quite a few photos in Germany that I think are worth sharing... including the following taken at Schwetzingen -- officially a town with a palace-like castle but a place that felt more like a garden suburb of Mannheim than anything else:- 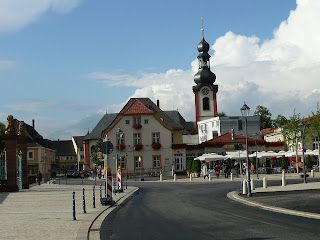 It may look like Disneyland but this is the real deal
-- i.e., a picturesque historic German town 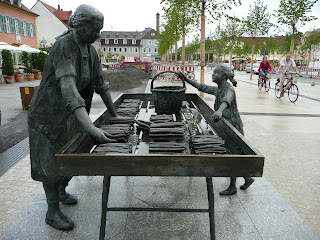 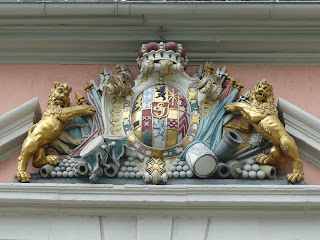 Also on the main street, on the way from the town railway station
to Schloss Schwetzingen, can be seen this elaborate coat of arms 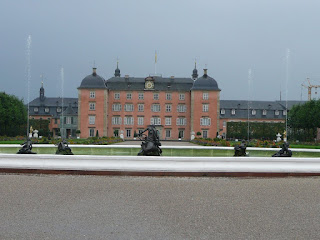 Its other attractions aside, there's little doubt that
Schloss Schwetzingen -- and its vast and beautiful garden
-- make up the town's main cultural draw 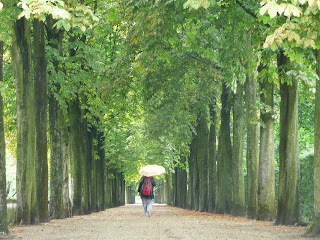 Even though it rained at times during the day,
my German friend and I couldn't help but spend
a good deal of time strolling about the palace gardens 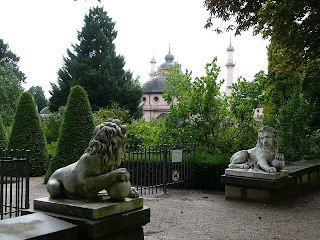 Among the palace's more elaborate follies
was a Turkish style mosque 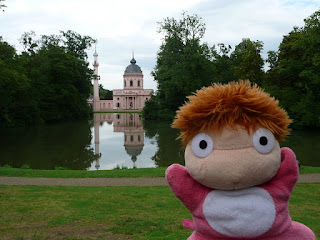 ...in front of which the far-from-camera-shy
Puppet Ponyo could not resist having a photo taken 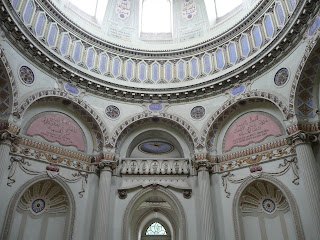 An unexpected sight inside the folly:
sayings written in Arabic script as well as German!

I really hope that you don't equate comments with interest. You use sitemeter right? You can see what people are looking at.

I know that my most popular posts by far have very few comments on them and they get hits just about every single day.

Maybe people are like me: just looking at your lovely pics w/o having anything to add to the discussion of Germany?

Must admit that I do equate comments with interest to some extent. (Re sitemeter: Hmmm, I can see how many people visit daily, weekly, how much time they spend on their visits, etc. -- but not which pages are the most popular/read.)

So am glad to read your comment that you look at my pics of Germany and think them lovely. :)

Really? I have the free version of sitemeter and there's a link at the bottom for ranking of entry pages.

And once I registered my domain -- or maybe before -- blogger started a stats thing on the dashboard page.

I like the pictures but wanted to ask: where are the food pictures? (I am assuming you took some, right?)

I just love your German trip (and posts)! Pics are amazing (especially those with Puppet Ponyo) too :)

YSTL, I have a question for you that isn't related to this post, but I did enjoy your pictures! If we visit Hong Kong in late December will we be able to hike?

Hi YTSL, I am enjoying your posts on Germany a lot. I'm heading to Germany (Berlin) in a couple of months and reading your posts is getting me excited. You're taking beautiful photos and I think Puppet Ponyo is adorable. Thank you so much for sharing.

Aaah... yes, I can see entry and exit pages -- but I didn't/don't necessarily equate entry with popularity, etc. And yeah, have also noticed that new extra stats offering on Blogger.

Re food pictures: see the entry above this one for your answer... :)

Thanks for piping up! Much appreciated! :)

Yes, late December normally has nice hiking weather in Hong Kong. It definitely is cooler and less rainy that time of the year compared to, say, now. :)

Thanks for your comments -- they're much appreciated. I was in Berlin in the summer of 1989 and really had a good time there. Hope you will have a great visit there too. :)

You're welcome -- and thanks for reading, looking, appreciating and commenting. :)