An unexpected element of my German visit 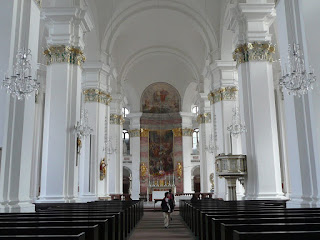 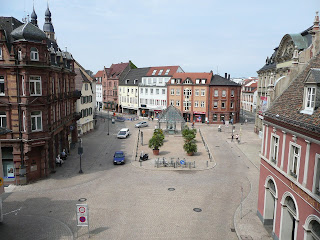 
"Summertime in Heidelberg, according to the song from The Student Prince, is a time for music and romance. Today, it's also a time when droves of visitors invade this beautiful city." Thus starts the Introduction to Heidelberg section of Frommer's Germany, the travel guide that I bought and read before I went on my most recent German vacation.

Although the Frommer's series of guide books have proved very informative for such as Japan, South Korea and -- yes -- Hong Kong, I have to say that its German edition wasn't as helpful in preparing me for a lot of what I found to be the case in the areas of Germany that I recently spent close to two weeks. For one thing, its food section paled in comparison (both quantitatively as well as qualitatively) to the equivalent guides for the Asian territories I previously mentioned. For another, rather than find myself in the midst of a whole horde of tourists, I found myself wondering far more than once -- including at times in Heidelberg, which I was expecting to be super tourist infested -- where the people, Germans as well as visitors, had gone!!

As early as my first night out in Germany, while walking home from the Africa fair in Ludwigshafen, I had noticed the lack of people about to my German friend. (Indeed, there was so little traffic on the road that: a) we didn't see a single car or other person on the walk home; and b) the loudest sounds I could hear were our voices and footsteps!) Her "explanation" that evening was: "It's late on a week night. So people are probably home and asleep."

A couple of days later, as we strolled through Hirshchhorn on Saturday afternoon, even another German friend could be heard remarking that it felt like we were walking through a beautifully kept-up ghost town -- or picturesque Potemkin village! (Somewhat taken aback herself, my German friend went online after we returned to her home that evening and discovered that that Neckar Valley village does indeed have a population of less than 5,000!!)

Still, the title of place where I really was the most surprised to encounter such a paucity of people over the course of my recent vacation has to go to Speyer. A town with a contemporary population of close to 50,000, it also happens to be home to a UNESCO World Heritage List-ed Romanesque cathedral -- the kind of place you'd expect to be a major tourist attraction -- and possess a settlement history that stretches back for thousands, not just hundreds, of years.

And yet... well take a look at the photo in this blog post that I took from the top of its Altportel late one Sunday morning!!! (My German friend's suggested explanation for how come the center of Speyer (including its cathedral and Maximilianstrasse, its wide main street linking the Altportel to the cathedral) was so bereft of people was that it's a Sunday, a day of rest for Germans...)

Like I hastened to point out to my increasingly agitated German friend, it actually wasn't the case that I was horrified per se by the lack of people about (though I had to admit that I did find it all somewhat creepy at times, especially in the late evenings and at night!). Instead, it also was true enough that I found the experience of being more likely to be alone than in a crowd on a wide urban space (like a main road or square) to be, well, so novel that there was quite a bit of humor to be had from and in it!

Put another way: At no time before I went to visit that First World country with a population of over 80 million did I ever think that I would spend time wondering and asking aloud the questions that I did end up doing more than once while there: namely, where are all the German people -- and, also, where are the (other) tourists? (The latter especially since so many of the places I visited really, truly, are not at all without attractions or charms!)

Salut!!!My name is bogdan from Romania!!!
We can be friends ???
http://bogdanstelistul.blogspot.com/

It's quite odd, but I've been noticing places are quieter than I expected. Even Pisa, although it was far from deserted, really wasn't as over-run as I expected. Having seen crowds in Versailles and the Vatican, I was expecting Pisa to be much the same. Is it the recession, do you think?

I went over and checked your blog. Thanks for the link -- but ermmm... your blog's in Romanian. Don't think I have that enough Romanian readers to return the linking favor!

Hmmm... there's not much of a recession in Hong Kong -- and, when I checked with my German friend, she said the same with regards to Germany. So... maybe that's why Heidelberg's not as crowded as I expected but I have a feeling that that's not the main reason behind the lack of crowds elsewhere that I went in Germany.

I don't know what to think about the relative lack of people who are/aren't out and about.

Here the small towns and smaller cities and even some larger cities have times of day when they look deserted. Some never bustle.

Perhaps you're not used to this as Hong Kong is a high density city.

I think there's a lot of truth to your comments. But I think that with many of the towns I visited in Germany, it also was a factor that they were more important towns in the past -- and consequently possess broad old roads in the town center that may have previously had more traffic.