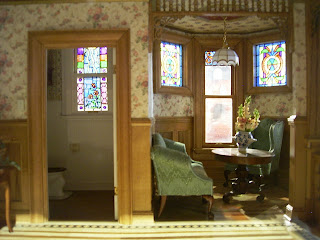 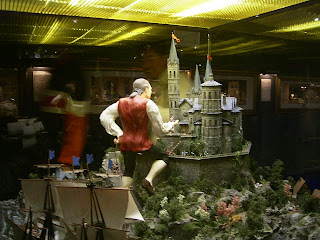 When I saw the theme for this week's Photo Hunt, my thoughts leaped immediately to a certain museological establishment I visited on Christmas Day, 2007 in Taipei, Taiwan. (As an aside, I decided to visit Taiwan over Christmas that year precisely because it's one of those parts of the world in which December 25th is not a public holiday -- which thus meant that I had one fewer day where lots of stores and attractions would be shut to contend with while on vacation!)

The Miniatures Museum of Taiwan is one of those quirky private institutions that are a testament to a single individual's passion and obsession. In this case, the individual in question is a retired Taiwanese businessman by the name of Lin Wen-jen whose love for miniature art works, including items that make up whole dioramic scenes from stories such as Gulliver's Travels or locales as diverse as Venice to Japanese villages to Victorian English home interiors, led him to collecting these objects on trips to different parts of the world and, eventually, setting up exhibitions in a museological setting for others to view.

Looking at these miniature objects individually, one can't help but admire the attention paid to details and the sheer skill involved in creating these works. When taken as a whole, one's scale of admiration cannot but increase -- and in this museum, what stands out is the love as well as imagination that has gone into assembling them; this particularly with regards to those spaces that aren't meant so much to be exact miniature replicas of actual spaces but, rather, where the creators' fancies are given to really take flight.

I can imagine how much fun touring the miniature museum would be. I am amazed at the detail that can go into miniatures. Great post for the theme.

Oh my, these miniatures are so awesome! I'm going to Taiwan soon, this is a place I must visit. MUST.

I will be happy and have lots of fun if i am there...happy hunting...

What a charming museum that must be. Great photos YTSL.

My mother and I spent hours happily touring the miniature museum. Not something we expected to find in Taipei but it counts as one of the highlights of our trip there. :)

Hope you enjoy your own visit to the museum. :)

Yep, thanks and happy weekend to you too, jmb. :)

What a cool place to visit. it is perfect for today's theme.

Must be nice to visit such a museum !

What a fun museum - the amount of work that goes into those miniatures is incredible. I, for one, would NOT have the patience to do that sort of work.

I would love to visit that museum!! it sounds wonderfully interesting.
miniature

it must be amazing to see these miniature artworks up close. thanks for the snippets.

I too would love to visit that museum! Very cool.

Hope you have a nice weekend.

What a great contribution to the theme: well written and informative!

I can tell I should have added my A Mini Bottle Gallery from Norway post :-) [http://www.terella.no/2008/01/19/release-party-at-a-mini-bottle-gallery/]

Btw; Thanks for the visit - glad you like to go out in the nature on Sundays too.

I'd so love to visit this museum! Miniatures hold a great fascination for me, all the way from doll's houses to model villages.

Museums, especially those featuring miniatures are fun to visit. I love them :)

I would love to tour in this museum! It's full of "little" interesting stuff!

That is a cool museum and one I wouldn't expect in Taipei. The creators must have great patience and skill to get such detail.

That sounds like a fun place to visit :) And yes there are a small but determined band of us Dr Who fans living in Toronto :)

Must be a fun event to tour a miniature museum...

Mine is now up too, it's right here.

Speaking of places -- my, have you got a lot of blogs! :D

And I, for one, don't have skilled enough hands for that sort of work! ;b

I'm not sure it's high on the traditional list of Taipei attractions but I definitely think it's worth a visit. :)

Yes, visiting the museum is one of those experiences that's best to experience for oneself.

Hope you get your wish some day! :)

I like that first pic too but I think the blurry man in the second photo better gives an idea of the scale of some of the miniatures to be found in that museum. :)

Thanks for reading, looking and appreciating -- and you're welcome re the visit to your blog. :)

Nearer to where you live, there's a great miniatures museum in Turkey. Have you been to Istanbul's outdoor Miniaturk? Loved that place. Too bad my camera actually broke down my first evening in Istanbul!!! ;(

As a former museum professional and life long museum enthusiast, am glad to hear of another fan of those institutions. :)

Yes, indeedy, re that museum being full of many interesting things. If you're interested, have featured photos of items from the museum before on this blog. Feel free to search for them... ;b

It's interesting the kind of museums that pop up in unlikely places. Citing Istanbul for the second time on this thread -- do you know there's a UFO Musem there? And here in Hong Kong, there's such as a Museum of Coastal Defence and Museum of Medical Sciences... ;b

Who knew re Dr Who fans in Toronto? Guess I do now! :D

Yes, it really can be fun -- and so much so that I've visited more than one of these institutions in different parts of the world. :)

Was that snow white's castle?

These are lovely and remind me of the fairy castle at the Museum of Science and Industry in Chicago. All the tiny jewel encrusted miniatures are amazing.
My miniatures are here.

I love minitaure. I'm sure visiting the place was so fun.

Er... look more closely at the main figure in the diorama and the fact that he's holding two smaller individuals in his hand for a clue...

Strange: I've been to the Museum of Science and Industry in Chicago but can't remember the fairy castle! ;(

YTSL you did a great write up about the miniature museum. Your description really brought it to life for me. I went with a miniature museum for the topic as well, but I didn't do it nearly as much justice as you did.

Thanks for the compliments and I'm glad you like my writeup -- but, honestly, yours isn't too bad either! :)