A Man Mo Temple in Lantau 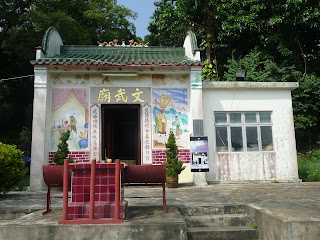 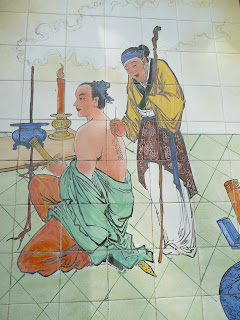 Intriguing art work on the temple's exterior wall
showing what looks to be a young version of the
God of War (Mo Tai, AKA Kwan Tai, AKA Guan Yu)
having Chinese characters inscribed on his back
According to the Hong Kong Tourism Board, there are more than 600 temples in Hong Kong -- with the Taoist goddess of the sea, Tin Hau being the most popular of the deities in terms of being the celestial being with the most temples dedicated to her. But while the 13th century Tin Hau Temple in Joss House Bay may be the oldest temple in the territory, quite a few other temples are better known -- due to their size (in the case of such as the Wong Tai Sin Temple) or location (in the case of the Man Mo Temple on Hollywood Road (on Hong Kong Island).

On the subject of location: earlier today while out hiking on the Lantau Island trail connecting Mui Wo to Tai Ho Wan, my two companions and I came across a modest-sized Man Mo Temple that has origins in the Ming Dynasty but looks far newer courtesy of a 1958 rebuilding by the Chinese Temples Committee. Although small in size, it definitely was not without interest.

In particular, I was intrigued by the artwork that is the subject of the second photo in this blog entry. So... if anyone can tell me more about that scene, do please either do so via this post's comments thread or feel free to email me.

Not completely unrelatedly, Dr Martin Williams labelled Lantau the Isle of the Unexpected on his website -- and I cannot but concur; this especially post today's hike whose path took my hiking companions and me past attractions as diverse as a pretty waterfall, a cave mined for silver in the 19th century, old villages with fung shui woods and earth god shrines, and more besides... including a Man Mo Temple that appeared unmanned as well as, alas, without any explanations as to its art and such (at least not in English)! ;(

A delightful little temple--you run across a lot of shrines that are (it seems) not visited very often and that, like this one, should be.

You must have quite a personal inventory of historical Hong Kong sites.

---
Is the super-typhoon about to smash into Luzon headed toward you?

This is a great discovery! Just like fresh out of NatGeo ;)

The nice thing about out of the way temples like these is that they allow photography... whereas a lot of the ones (like the Lin Fa Kung/Fire Dragon Temple which -- grrrrrrr --- allowed a shoot out scene to be shot for "Fire of Conscience") in town don't.

Re the super typhoon: it seems headed that way but not yet and not at full strength. To take a look yourself, go here:-
http://www.hko.gov.hk/wxinfo/currwx/tc_pos.htm

Heheheh... and thanks for the compliment -- this not least since as a child, I fantasised about working for National Geographic (albeit as a writer rather than photographer)! ;b