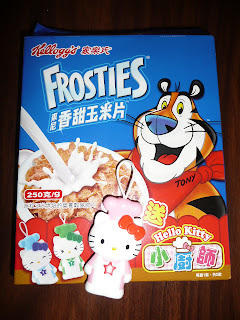 See what you get if you buy a packet of Frosties
(AKA Frosted Flakes) cereal in Hong Kong! 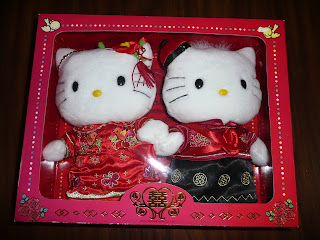 My wedding present for my brother and his new wife

The last time my mother visited Hong Kong, she asked me -- after being assigned the task of being Puppet Ponyo's handler when we were in Macau as well as post-viewing my Puppet Ponyo-in-Germany photos (e.g., here and here) -- whether Ponyo had risen above Hello Kitty in my affections. Since this is not the case, I got to thinking that it'd be good to devote a blog entry to the cute cat at some point in the near future -- and recent events have given me a good reason and opportunity to do so.

More specifically, earlier this week, when I popped into the supermarket on my way home from a stressful day of work, I decided that I had a craving for a sweet cereal for breakfast the next day. Upon going to the cereal section of the store and spying a cereal box featuring Hello Kitty on it (and the prospect of accumulating yet another free Hello Kitty item), I found myself instinctively making a grab for it. And so I've found myself eating that particular brand of cereal for breakfast on the days that I've felt like eating cereal (as opposed to, say, fresh fruits as often is my wont).

Additionally, when it came time to buy a wedding present for my brother and his now wife earlier this week, I really did opt to buy them a Hello Kitty and Dear Daniel plushie set -- and not just any set either but, instead, one which saw the kawaii pair of furry felines dressed in traditional Chinese garb!!!

And before anyone wonders: I know that my sister-in-law shares my love of plushies. So I'm trusting that she's telling the truth when she told me she thought the present was cute. As for my (younger) brother: well... let's just say that I remember when he was a big fan of the Care Bears, had plushies of his own and was almost as cute as Dear Daniel himself. So... I figure he'll be able to grin and bear (no pun intended) the presence of those commemorative plushies in their abode in the years ahead! ;D
Posted by YTSL at 10:56 PM

"I decided that I had a craving for a sweet cereal for breakfast the next day."

I have to ask: Do you ever have that same kind of cereal before bed-time?

I know it's not an entirely healthy habit, and it's one that Jerry on the Seinfeld show made more acceptable, but I prefer to eat my cold cereal before bed than at breakfast.

I haven't done it lately but now I have a craving!

Teehee, I've never eaten Frosties before bedtime -- and have to say that these days, I only eat cereal for breakfast. But when I was a kid living in England, dry Sugar Puffs* (i.e., sans milk) were my snack of choice and in the US, I would regularly have Captain Crunch as a dessert and dry Quaker Oat Squares as a snack. :b