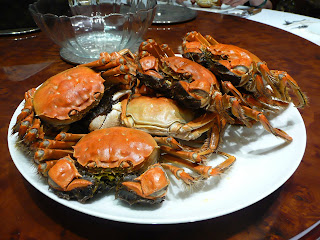 So strong is the love of Shanghai crabs by many a gourmand
that a few flew off the pictured plate before I could even
take the photo despite the camera already being in my hands
when the plate arrived on the table! 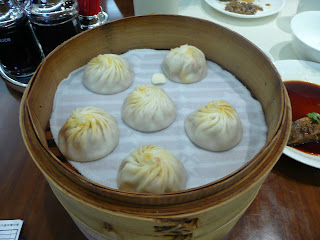 An easier way to partake of Shanghai crab roe --
inside of seasonal Shanghai crab roe xiao lung bao!
Years ago, I struck up an e-mail correspondence with a woman who told me that she started watching Hong Kong movies in order to learn how to use chopsticks. Some readers may laugh but I have to say that, like her, there are indeed things that I have learnt from watching Hong Kong films -- and not just the kind of Cantonese words whose knowledge I've shocked many of my Hong Konger friends with either!

For example, I first got to know of the existence of a the culinary delicacy known as Shanghai crabs (or hairy crabs) through watching The Soong Sisters, Mabel Cheung's 1997 biographical drama about a real life trio of influential sisters who all married prominent men who all had important parts to play in the affairs of China. And subsequent cinematic encounters with those prized crustaceans only strengthened my resolve to try eating them at some point.

Then one momentous day, while my mother and I were visiting Hong Kong, a family friend invited us to her home to partake of Shanghai crabs (and much, much more). As we settled down to get our first taste of the delicacy (complete with an accompanying sweet dip made out of vinegar, soy sauce, sugar and ginger, and glasses of 10-year-old Shaoxing wine into which a sweet pickled plum is inserted to add to the flavor), this friend told us that the crabs we were eating were male crabs -- whose "eggs" were considered to be better.

Rather than puzzle how male crabs could have eggs, we just concentrated instead on enjoying the feast of crabs set before us -- and it was only after reading an article in The South China Morning Post about the creatures that I got to realizing that the "eggs" in question actually weren't really eggs. Instead, the most prized element of the day's repast -- that we had been happily devouring -- was none other than Shanghai crab sperm!!!

If truth be told, I am very glad that I learn this fact after I had eaten Shanghai crabs -- because this way, I know that the taste of the Shanghai crab sperm is so divine that I really don't care what it actually, really is. (Alternatively put: yes, I am happy to eat it... time and time again!) Instead, what tends to get in my way of wanting to eat Shanghai crab is that I have found it impossible to eat without making a thoroughly embarrassing mess of my place at the table.

Consequently, I've only felt comfortable enough to eat Shanghai crab in private -- among friends and family members who will excuse my mess... or help prevent it by peeling and generally opening different parts of the crab for me! (Something I did on Friday night.) Or eat its most prized parts -- i.e., the sperm or roe -- in the form of such as Shanghai crab roe-filled xiao lung bao which are to be found when Shanghai crabs are in season at restaurants like Din Tai Fung and Victoria City Seafood Restaurant. (Like I did on this past Saturday night!) :b

So Shanghai crab is more about the method of preparation and not some special breed of crab from Shanghai, right?

When you were in the US, did you eat crabs? They are very messy and quite popular in certain parts of the country, especially around Maryland.

I hate to say it but too don't find them worth the effort and the mess. I will get messy for peel-and-eat shrimp but not crab.

Oddly, the typhoon shelter crab I had in April was easier to eat and clean up from than any Old Bay Seasoning-laden crab here in Maryland -- where the smell won't come off your hands for days.

"So Shanghai crab is more about the method of preparation and not some special breed of crab from Shanghai, right?"

Er... please check the links I provided/embedded into my blog entry...

"When you were in the US, did you eat crabs?"

Yup -- with my favorite being soft shell crabs... So much easier to eat than hard shell ones! :D

Sounds like a wonderful meal! So which part of the Shanghai crab did you eat first-the body or the legs?

And are there really people who eat crabs without making even a little mess?? If so did you video them???

Plus there's no fun eating crab if you don't make a mess.

I eat the sperm first! :D

And apparently, there are people who really don't make much of a mess -- and even can "reassemble" their eaten crabs! But I still haven't encountered such people even while it's also true that I've seen some people who are far more dainty than moi when they eat Shanghai crabs... ;S

Hahahaha -- I like your attitude. And that's why it's good to eat crabs with you! :D