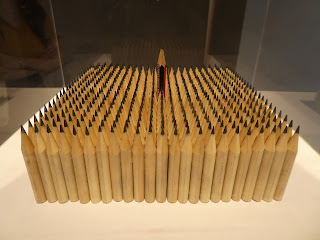 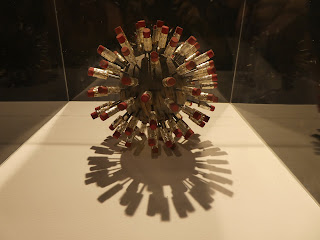 Also from Chan Man-chun's Chung Hwa series
that was part of last month's 6.12 exhibition
-- this art work is easy enough to interpret


Was it just a few days ago that Hong Kong celebrated having gone three consecutive weeks without a local Wuhan coronavirus transmission?  Alas, the past two days have turned up evidence of a community outbreak taking place in Hong Kong; with there being close to four times more locally transmitted cases reported today (19) than imported ones (5) for a total of 24 new cases to add to Hong Kong's growing tally of 1,323.


Amidst this latest surge of coronavirus infections, local experts are calling for a re-tightening of certain restrictions; with the idea being to curb the spread of the coronavirus in indoor settings (where it's been found to take place more easily than outdoors).  And looking at the venues where the latest spreads have been identified as taking place (e.g., restaurants and at least one elderly care home), it is indeed looking like it's healthier to be out in the open air, if one does venture outside of one's home, than enclosed spaces.


Speaking of enclosed spaces: a certain inauguration ceremony took place behind heavy barricades outside what's ostensibly a hotel in Tai Hang, a stone's throw away from the Lin Fa Kung temple of fire dragon fame, this morning.  Strange but true: a branch of the Metropark Hotel has become home to the Hong Kong national security office (though, upon some analysis, the choice of that building to house the Hong Kong equivalent of the Stasi does actually make quite a bit of strategic sense).


It having taken over a week since China's security legislation for Hong Kong was made law can be considered one of the slower pieces of actions that the authorities have taken since we moved into July.  Frankly, they've appeared in quite the hurry to "mainlandize" Hong Kong; with jokes about things changing by the hour having been replaced by observations about it feeling like they're changing by the minute.


Among today's announcements: the Hong Kong government banning of the Glory to Hong Kong protest anthem in Hong Kong's schools -- including the alma mater of Sun Yat-sen, located just a few feet away from the national security office headquarters -- and the same government proposing that all civil servants be required to take oaths to pledge allegiance to the Hong Kong SAR, and declare to uphold the Basic Law.  (No word, as yet though, of the extension of the Great Firewall of China to encompass Hong Kong though I must admit that I am getting a sense that that day is approaching, and probably way more quickly than I would like, despite -- or maybe because of -- internet companies (belatedly) standing up to the authorities in Hong Kong.)

Something that doesn't look to be changing anytime soon though is the local constabulary being allowed to employ chokeholds while making arrests, including by way of kneeling on a person's neck.  This is even though there's been one recent death from this practice here, not just over in the U.S.A.; and one also needs to factor in that Hong Kong riot police now regularly wear metal knee guards when on duty.

Something else that I am afraid will not be changing for a time is the police brutality and misbehavior that makes the local constabulary no longer respected by the vast majority of Hong Kongers.  It's not just the overwillingness to use tear gas (including inside MTR stations and near homes for the elderly), the targeting of journalists and the mass arrests of pro-democracy protestors (many for what might best be described as thought crimes).  Rather, it's also the callousness and cruelty that's often on display, even when the officers are aware that cameras are capturing their actions.

One can only imagine the horrors that take place where journalists and their cameras aren't around.  Or not, since some brave souls have stepped forward to give testimony.  And then there are those cases which are heard in court: like that which saw a man acquitted yesterday of pushing a policeman during the protests, over the course of which it was revealed that had been subjected to physical and verbal abuse by police officers following his arrest back on November 12th of last year.  In all honesty, a little piece of me died when I read the following:

Fiona Nam Hoi-yan, for [the defence counsel for the subsequently acquitted man], complained during the trial that officers had used pepper spray on [him] at close range before pouring an unknown liquid on his head, making the inflammatory substance flow down his body and causing searing pain.

He later felt unwell and vomited inside a police van after arrest, but was asked by an unknown officer to “clean it up with his tongue” before he was allowed to get off, Nam continued, adding that [he] was repeatedly intimidated during the car journey to the police station.

There is no mention in the article of the police officers involved being reprimanded, let alone punished.  Perhaps the icing on the cake (to give you a sense of the caliber, and tolerance, of Hong Kong protestors): "Asked outside court whether he had anything to say to the police officers involved in his case, the free(d) man said: “We are all Hongkongers. The same goes for the police.”"
Posted by YTSL at 11:44 PM