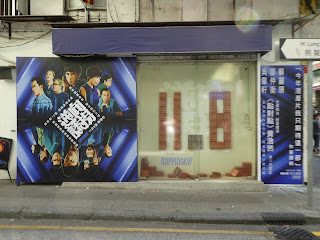 Not your usual movie advertisement in Yau Ma Tei

Close to four years after making his directorial debut with the charming Dot 2 Dot, Amos Why's highly anticipated sophomore effort made it into local cinemas.  Made with a bigger budget (of approximately US$1 million) and greater ambition than that which actually was my favorite Hong Kong movie of 2014, Napping Kid also sees the director-scriptwriter turning from straight drama to a complex crime mystery with political undertones.

An adaptation of Hong Kong-born, Canada-based writer Mannshin's award-winning same-titled novel, Napping Kid sees police detective inspector Tong Fu (David Siu) being approached by his ex-wife (Candy Cheung), on behalf of her boss (Michael Wong), to investigate an attempted blackmailing involving her investment bank's confidential report-financial analysis of a Chinese IT company.  After being told of the attempted blackmailer's surprisingly modest ransom request, Tong Fu decides that he needs to figure out what's behind the attempted blackmailer's actions as well as his/her identity.

Thus begins an investigation that sees a number of the bank's employees -- including his wife, IT expert Dylan (Ng Siu Hin), junior analyst (Cecilia So) -- that sees them confined together in a hotel suite, put under surveillance and denied the use of their mobile phones.  For some reason that never was explained in the film, however, Dylan's notebook computer never was taken away from him.  And as pretty much any person would expect, he proceeded to make full use of it, including to do such as send and receive messages to the apparent criminal mastermind behind the whole affair.

That major improbability bugged me for much of the time that I was viewing the movie -- and I know that I was not alone in this regard from conversations I've had with a number of people who have also viewed Napping Kid ((including a couple of scriptwriter friends and one who's a professional film critic).  I suppose that apologists for the film could chalk it down to the police officers assigned to monitor the suspects being bad at their job -- so bad, in fact, that one of the other suspects also managed to sneak in someone else's mobile phone into the hotel suite and use it a number of times -- but surely that would be too convenient a way to explain away what is in effect a pretty major plot hole (which resolved in this way would then get one asking why such a big deal was made then of the need to effectively sequester the suspects)?

If only this was my major problem with Napping Kid's story but the fact of the matter is that I found too many problems with it to want to list.  Adding to my gripes with the movie is its poor -- to the point of irritating -- use of background music and an editing style that looked to have been designed to complicate and confuse viewers in order to hide the lack of logic of much of the plot and script.

At the end of the day, perhaps the greatest mystery of all for many viewers may well be why Napping Kid has received such positive reviews from certain critics.  My own findings lead me to the conclusion that this stems in large part from there being a lot of goodwill for the film's director and also sympathy for his good intentions (including with regards to local socio-political matters).

For my part, I hope that Amos Why's filmmaking career will not come to a premature end as a result of this offering that just is not a very good movie and, deservedly to my mind, doesn't look like it will be able to break even, never mind make a profit, at the box office.  For one thing, he showed with Dot 2 Dot that he can make a good, wonderful even, movie.  For another, even with Napping Kid, he showed how good he is at getting much out of his actors and actresses (a good number of whom managed to make their characters feel like real people rather than one-dimensional character types) and I continue to appreciate how much Hong Kong itself is very much a character in his movies.

I see that you have given quite a few HK films high scores lately (but not this one, obviously). If my counting is correct, you have given at least ten HK films scores of 7 or above so far this year. Does it mean you might actually write an end-of-year top-ten list this time, unlike last year when you didn't do one because you were too busy partying, taking Ponyo to different places and enjoying alcoholic beverages everywhere you went? ;)

Thanks for making me laugh out loud while in front of the computer! Yes, I think there's a good chance I'll write a "top ten Hong Kong movies of 2018" list. There was a fallow period earlier in the year but the last few months have seen a steady stream of Hong Kong films appear in local cinemas, quite a few of them I do indeed like, at least a couple of which I'd go so far as to say I love. :)

Have you seen Tracey yet? If so, did you love it too?

I haven't seen "Tracey" yet but do plan to. The first poster of it wasn't great looking but has been replaced by a better one. I also found the film's trailer intriguing.