Not counting Lantau Island, Cheung Chau is the Hong Kong Outlying Island that I have most frequently visited. More than once, it's been my place of a choice for a day excursion that can include spending a restful time hanging out at one of its beaches as well as wandering about the island.  I've also been known to head out there for a seafood lunch at Hong Kee "Respaurant".

And twice now, I've gone to Cheung Chau to hike.  The first time around was one warm and humid summer's day some years back with Roz's Group (see here and here for photo-essays of that day's outing).  The more recent time was on a fall day with two hiking buddies -- and I have to say that it really was more enjoyable the second time around, not least because the weather was -- and companions were -- more pleasant and we covered more ground by venturing to the northern as well as southern sections of the dumbbell shaped island... 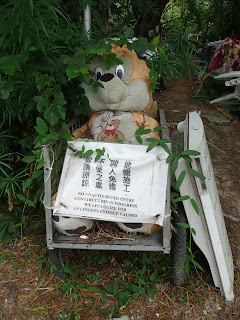 Not the usual hike sight encountered early on! 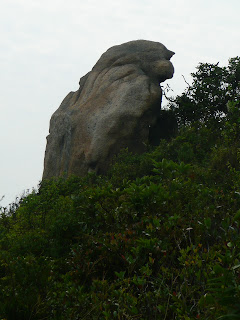 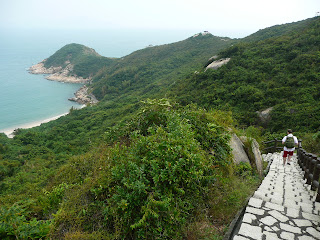 We followed the path down to the beach 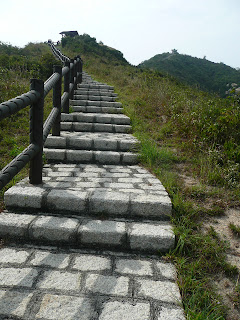 ...even though we knew it meant that we would
then have to follow several other steps up later on! 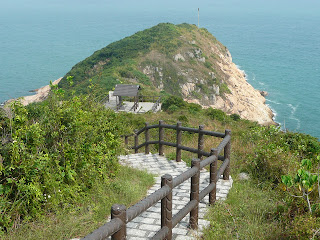 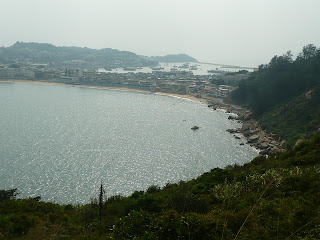 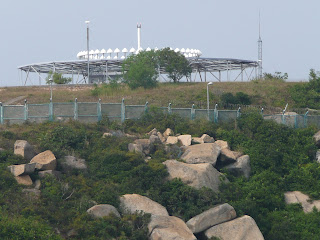 On one of Cheung Chau's northern-most hills is
this structure that resembles a beached UFO to my mind! 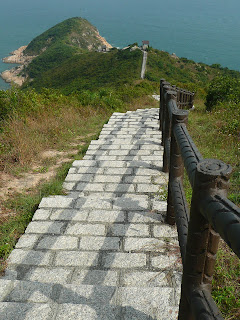 Look back at the fifth photo from the top
to get a sense of how far we had come from there...

To be continued -- with photos of central and southern Cheung Chau to come in the next photo-essay! :)
Posted by YTSL at 8:42 PM

Is the rock formation in the second photo considered some type of animal or other creature?

Looks like in Hong Kong area they put a lot of effort in some good hiking areas.
Coffee is on.

It's one of those (rare) Cheung Chau rocks that doesn't have a name... but I think it looks ape-like, don't you? ;b

Yes, I think the Hong Kong authorities do make more effort into make hiking a popular activity than many others in other parts of the world. :)

The "beached UFO" -- you're right, it does look like one ;-) -- is the Cheung Chau VOR / DME, a navigation aid for aircraft overflying Hong Kong or arriving / departing at Chek Lap Kok.

Thanks for the information about the "beached UFO". Really appreciate it as I didn't know until you shared the info. :)