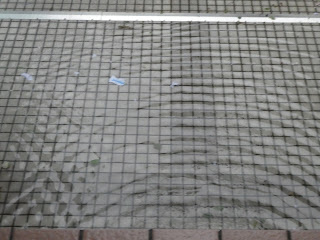 Large pools of water where there shouldn't be 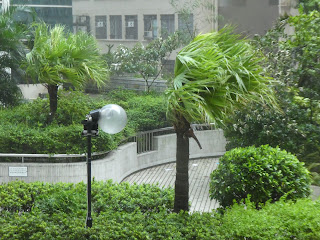 Strong winds did this (including decapitate a couple of garden lamps!) 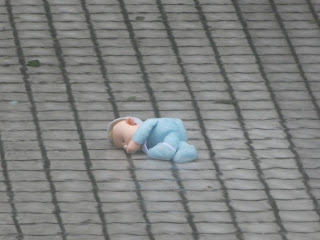 Shortly before I decided to call it a day last night, the No. 8 Gale or Storm Signal was raised by the Hong Kong Observatory.  And when I woke up this morning, it was to find that Hurricane Signal No. 10 (the highest typhoon warning signal used by Hong kong) had been raised despite Super Typhoon Mangkhut having been re-designated as "just" a severe typhoon.


A little more than a couple of hours ago, the T10 signal was replaced with the No. 8 Gale or Storm Signal having been hoisted.  But it's actually still pretty windy and plenty rainy out there, and I won't feel safe enough to venture outdoors or take an elevator until the signal drops to at least T3 (this since there were a number of power surges in my building today and I've read reports of people getting stuck in elevators in various parts of the territory in the past 24 hours or so).

At the risk of sounding like a scaredy cat, I also must admit to not having felt 100 percent safe in my apartment at various points today.  Among other things, I worried that Severe Typhoon Mangkhut would break the glass on at least some of my windows or even blow the windows out entirely since this particular tropical cyclone was being billed as the strongest on record to hit Hong Kong as well as the strongest typhoon this year.  And it really didn't help that this typhoon's winds sounded at times like that of a jet engine and I was given a good idea of its strength when it decapitated at least a couple of lamps in my building complex's podium garden and sent quite a bit of stuff flying out of windows and down from my very building or ones nearby!


Something else I was shocked to observe was how the water in my toilet bowl actually swirled about at times when the T10 signal was in place and also its turning disconcertingly murky rather than staying clear colored!  Still, I am thankful that -- unlike a few of my friends -- I couldn't feel my building swaying about for much of the day (maybe because my apartment is on a lower floor than theirs!)!


In addition, I am very grateful indeed that I don't live in a low lying area susceptible to flooding and being pounded by scary looking waves (like not only the old waterfront villages of Tai O and Lei Yue Mun but also the modern housing estate of Heng Fa Chuen).  And left even worse off are Macau, where some 20,000 households have been left without electricity by Mangkhut, and the Philippines, where floods and landslides added to the damage caused by Mangkhut and the death toll has already risen to 64 at the time of writing (and possibly could go up quite a bit higher in the next few days).

In view of how dangerous many of us figured or even knew outright that Mangkhut would be, I'm rather shocked that there were people who thought nothing of going out to waterfronts to get some thrills and others who decided that a T10 typhoon was not enough to stop them going for yum cha with family members and/or friends!  In all honesty, until a friend told me she was out having dim sum with her parents this morning, I didn't realize that there were any restaurants that would be open when a signal higher than T8 had been raised!!

For my part, even though I must admit to suffering a bit from cabin fever, I don't regret staying put in my apartment pretty much all day today.  And for the record: I will state that Severe Typhoon Mangkhut really has felt far more powerful -- and scary -- than the two previous T10-strength typhoons (Hato last year, and Vicente in 2012) whose Hong Kong visits I've been around to experience; and it really is a scary thought indeed that, as a result of climate change, the world may soon see hurricanes or typhoons that are even stronger than the category 5 Mangkhut. :(
Posted by YTSL at 10:48 PM

Yes, the whirling sound literally started a bit before the Signal #8 was hoisted. Once it started, it just continue without much pausing. Maybe its pitch would go up and down at times, when there were gusts of wind coming through with higher speed.

The traffic disruption this morning is significant though. What a mess.

Happy to hear that you are alright. I wouldn't have gone out either :)

There was an hour or so of relative calm around 2pm yesterday but yeah, the strong winds felt -- and sounded! -- pretty much continuous for much of yesterday.

Sounds like you're safe but negatively affected by this morning's traffic problems. Let's hope things get back to normal in Hong Kong before too long.

Good to hear from you and hope you're okay too! So much seems to be happening in your country...

Some of my colleagues living in the New Territories and out lying islands were not able to get back to work at all.

I know, we are going deeper and deeper in a socio - economic mysery.

Three days on after Severe Typhoon Mangkhut's visit, I'm amazed how much of the city looks back to normal but I do wonder how things are in the more rural parts of Hong Kong, particularly in the New Territories and Outlying Islands. And even sans typhoon damage, I am so glad that I no longer have the work commute that I had for several years, when my office was out in Tai Po!

I'm sorry to get confirmation of that. As you know, I really enjoyed my visit to your home city and still nurse thoughts of visiting other parts of your country in happier times. Please take care and thanks for continuing to visit my blog.