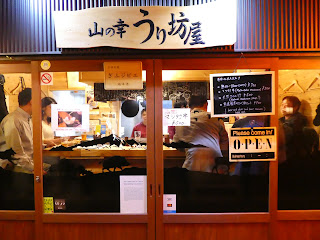 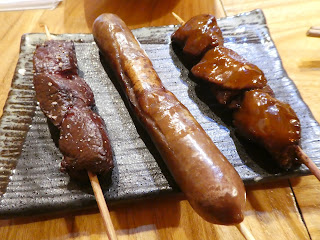 From left to right: skewers of regular venison,
venison sausage and deer steak in a special sauce 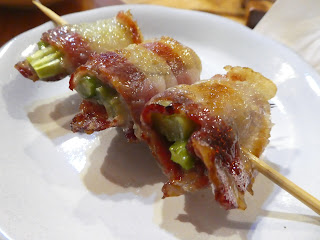 Long before I set foot in Takayama, I already knew about its reputation for being a great place to dine on Hida beef.  And even if one didn't know that beforehand, the sheer number of restaurants offering that premium wagyu there makes that fact darn near unescapable once you start wandering around town!  On the other hand, it wasn't until my second evening in the mountain town that I discovered the existence of at least one dining establishment in Takayama that specializes in wild game.

Using what I know about Japanese towns and cities, I figured that the more interesting restaurants in town would not be located on a main street but, rather, in a side street or alley.  And after coming across one of those yokocho filled with tiny bars, eateries and also -- at least in Takayama -- game booths, I got to thinking that it would be worth trying out at least one of these establishments.

Wild game specialist Yamanosachi Uribouya was supposed to be my first stop of the night.
But after tasting the food served up by hunter-proprietor-cook Masato Wakidani and enjoying the friendly company provided by the folks I was seated closest to in that cosy establishment (which probably could have had 10 people in there at most!), I ended up having my entire dinner there!

While I've had venison a couple of times before, I never was a big fan; finding the meat to be too, well, gamey tasting.  An American friend of mine living in Hong Kong had assured me though that fresh deer meat tastes quite a bit less gamey and really good.  So I figured that it was worth giving it a try again -- specifically by ordering Yamanosachi Uribouya's skewers of venison, venison sausage and deer steak.

When my platter arrived, I opted to start with the skewer of venison and found it to be interesting and better than I expected.  Prior to biting in the venison sausage, I had expected it to be similar tasting to the "regular" venison.  Instead, it was different and so surprisingly delicious that I was moved to exclaim thus to Wakidani-san, who appeared to be very pleased to hear as well as see my reactions to the food he had served.  And here's the kicker: the skewer of deer steak (lightly basted with a secret sauce) excited my taste buds even more than the venison sausage!

Deciding there and then that this would be my last as well as first place for dinner that evening, I ordered another glass of draft beer, additional skewers of venison sausage and deer steak, and also some vegetables in the form of a side dish of tsukemono (Japanese pickles) and a Shiitake mushroom skewer (which also proved to be pretty tasty) for variety.  And while I eschewed the chance to try some bear meat (which also was on offer), I plucked up the courage to additional order skewers of wild boar bacon wrapped around asparagus and quail's eggs -- and found them to be the most delicious things I tasted of the night!

As my previous food posts for this trip have shown, I ate a lot of good stuff on this recent Japan trip.  So I reckon it's saying a lot when I state that I actually think the single best meal of the trip wasn't that of unagi, hitsumabashi style, or Cochin chicken in Nagoya, or even any of the meals in Takayama where Hida beef was the star of the show, but, rather, this revelatory wild game feast at Yamanosachi Uribuoya!
Posted by YTSL at 11:33 PM

Curious now ... what did you taste in the wild boar bacon that made it your favorite? Did it resemble in any way the Spanish Iberico pork? I'm wondering since the Iberico pig is supposedly closer to wild boar in terms of bloodlines.

From what I can remember, the wild boar bacon was stronger, richer and more distinct tasting than regular pig bacon, never mind the likes of turkey bacon. I didn't make the Iberico pork connection when eating it. Rather, what I was thinking was how different it tasted from regular pork as well as bacon -- but also not distinctly gamey the way I had expected that it might!