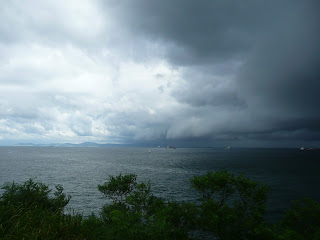 The right side of the sky unleashed a torrent of rain
while the left side decided to wait before falling suit! 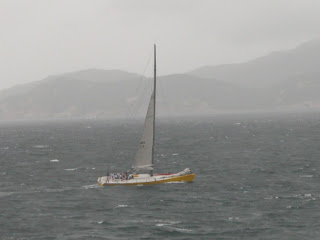 In the middle of the grayness of the downpour,
a sailing vessel stays the course and plows ahead 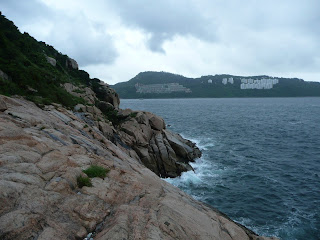 After the deluge, color returns again to the world! :)

Without a hiking companion for the second Sunday running, I decided once more to do a bit of walking -- rather than more hardcore hiking -- and exploring in a part of Hong Kong that I had previously never been to.  Last Sunday brought me out all the way to the northwest New Territories to photogenic Nam Sang Wai while this afternoon saw me traipsing along Chung Hom Kok Road all the way to the southern tip of Chung Hom Kok Park.

A while back, I had spent time at the nearby Chung Hom Kok Beach and not been particularly impressed because the beach turned out to be smaller than I expected -- and, worse, home to sandflies that made a beeline for my calves and ankles! Still, when viewed from Chung Hom Kok Road (like was the case today), it looked pretty nice indeed!  And if I hadn't felt a need to be somewhat careful since, however quiet, Chung Hom Kok Road still is officially open to traffic and without any sidewalks for much of its length, I'd have stopped to take many more photos of it.
Instead, I largely restricted my photo-taking this afternoon until I reached the part of Chung Hom Kok Park that lay beyond the southern end of the road -- a section that, if truth be told, I found to be another disappointment size-wise; with ne big reason being due to it being so that while,it is shown as covering a fairly sizable amount of land on the map I have, most of the park turns out to actually consist of the kind of rocky, high ground that's too steep to easily explore.
On a more positive note, however, the small sections of the park that are easily accessible offer up some really nice views of the surrounding waters and over scenery.  And although part of me wishes that the heavens hadn't decided to open shortly after I got to Chung Hom Kok Park, another part of me recognizes that the rainy weather contributed some drama to the photos I took while there!
More than incidentally, those readers who ever find themselves in that not frequently visited section of Hong Kong should make a point to go down the flight of stairs at the southern most point of the park.  For there's a bunker like structure (which may or may not date back to the second world war) down there -- in which I spent some time sheltering from the rain this afternoon -- and the views in front of it are the best in that area! :b
Posted by YTSL at 8:54 PM