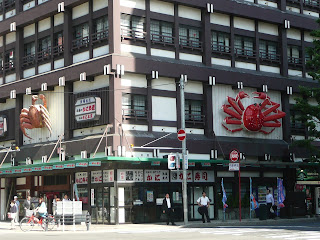 Two sure, visible signs hang from the walls
of this restaurant specializing in crab dishes! 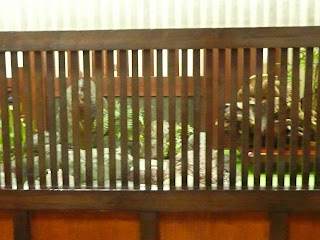 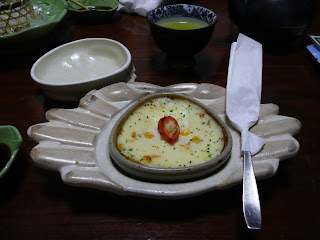 The creamy crab gratin I ordered was served
in an appropriately crab-shaped dish ;) 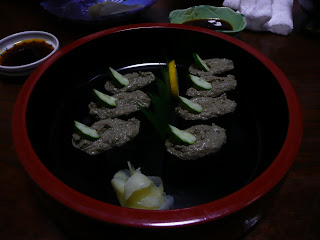 My mother grabbed and ate one of the pieces of
kani miso before I could snap a shot of this dish! :O

I've said it many times and I'll say it again now: I've never had a bad meal in Japan.  And this even though I often go and eat in a dining establishment based on how it looks from the outside -- i.e., without done any advanced research about the place!
Take as an example the crab restaurant that my mother and I had our first meal of our vacation in -- one that we went to after arriving in Sapporo and checking into our hotel, and deciding that on we'd settle at whichever place we passed along the way that caught our eye and fancy as we strolled towards Odori Park and its summer beer gardens.

Sapporo Kanihonke, I've subsequently found out, is part of a chain of crab restaurants that has its origins in land-locked Nagoya. The particular branch where we had our late lunch is situated just a few blocks from Sapporo (railway) Station, in a large multi-storey building that's filled with crab-themed items (statues, dishes, utensils, etc.) but also could be said to be decorated in a pretty tasteful, traditional way.

Ushered into a private room, my mother and I decided to share one set meal and two a la carte dishes.  The way it turned out, my mother ate the bulk of the set meal while I ate the bulk of the a la carte dishes that consisted of on order of wonderfully creamy rich crab gratin and another of eight absolutely delicious pieces of crab miso gunkan sushi.
For those who think that crab miso has miso (i.e., fermented soybean paste), like that found in miso soup, in it, think again.  Because while crab miso may look like miso in terms of its color and texture, it's an altogether kettle of fish (or should I say crab?)!
Actually, I've read and heard two different things about what crab miso actually is -- both of which may sound off putting to some readers.  The first is that it's crab guts, the second that it's crab... sperm.  Re the second possibility: well, this would not the first kind of sperm I've decided I like eating -- or even the first kind of crab sperm for that matter!

And to those who remember my love of Shanghai crab sperm and now are really curious to know which I prefer: I have to admit that I prefer Japanese crab sperm -- to eat -- even while also being of the opinion that the orange Shanghai crab sperm is visually more pleasing than the mud-colored Japanese kani miso. ;b
Posted by YTSL at 8:22 PM

I hope I can go visit and got more idea for my food!

Do you mean that you would like to go to Sapporo in general or "just" Sapporo Kanihonke? Especially if the latter, check back in a week or two as I will have a blog entry up on a visit to *another* crab restaurant... ;b

I know that the Japanese are known for the aesthetic visual appeal of their food, but these photos are gorgeous. The food almost looks too good to eat. For me, they are like the colors laid out on an artist's palette.

I agree that Japanese food looks good -- and boy, does it taste good too! ;)

Wow interesting fact about crab miso! I think I'd still try it anyway... especially since you think it's so good!

I like it a lot -- and find that it doesn't need to be super fresh/top quality to be enjoyable, unlike, say uni! :)