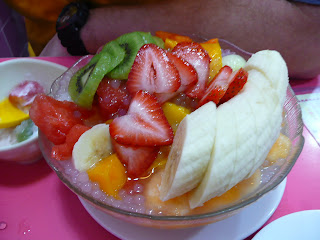 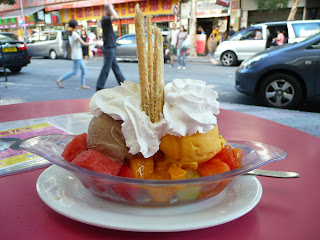 A smaller -- but no less delectable -- offering
at the same Yuen Long dessert shop! :)

For all of it sometimes seeming like I hike everywhere in Hong Kong, there are certain parts of the Big Lychee that my hiking companions and I regularly end up at hike's end, particularly after a bus or mini-bus ride to a transport hub from where we can make our way back to our respective parts of Hong Kong.  One of these is Sai Kung town, another Tsuen Wan.  Another increasingly favored hike destination -- not least part it's got really good eating options -- is the northwestern New Territories town of Yuen Long.


Early on, my then regular hiking companion and I favored a Japanese restaurant which offered large portions for a low price.  On subsequent visits, however, I began seeking out more local fare -- and  got to enjoying the shrimp roe noodles at Ho To Tai Noodle Shop and also the best chicken -- and maybe also claypot rice -- in the world at Tai Wing Wah.

On one occasion, a hiking buddy and I also went for the B Chai Grass Jelly dish that is Kai Kee's Dessert most famous and also largest by far.  Some reports have it that it can only be eaten by a minimum of four people but my friend and I managed to polish a whole dish of it off by ourselves that evening!


Still, when I was in Yuen Long by myself recently, I didn't dare to order that particular dish even while being drawn to sample the delectable fare at Kai Kee Dessert.  Because it was a hot day, I longed for something cold and refreshing -- and opted this time around for dessert that consisted of cut fruits, whipped cream and scoops of chocolate and mango ice cream.
Suffice to say that this dish was just the ticket -- and also helped revive me in the heat and humidity that still was palpable come early evening.  And for what it's worth, I also liked that I could sit outdoors and take in the street scene and local atmosphere. :)
Posted by YTSL at 12:06 AM