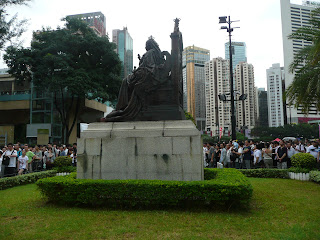 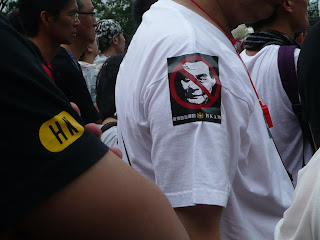 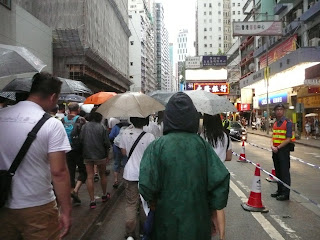 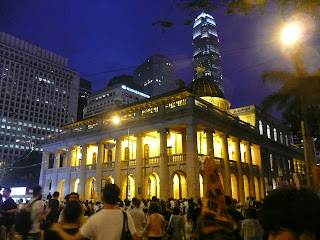 It was night when the friend I was with and I got
to Central but we cared less that it took so long and
more that we did continue marching right to the route's end! :)

For much of yesterday, Hong Kong had been treated to beautiful blue skies and good weather, albeit with temperatures that were on the high side.  But before the day came to a close, Typhoon Warning Signal No. 1 had been hoisted -- signalling that Tropical Cyclone Rumbia was centered within around 800 kilometers of the teritory.  And, even more inauspiciously, before the start of this year's July 1 rally this afternoon, Typhoon Warning Signal No. 3 was raised.


This didn't stop several (hundred) thousand people -- including several friends and myself -- from heading to Victoria Park, where the march for democracy officially started, however.   Neither did the at times heavy rain that fell intermittently throughout this afternoon and evening deter us from taking part in the march that, on the 16th anniversary of Hong Kong's Handover back to China by the British, ended in Central -- near the old Legislative Council Building rather than the Central Government Complex in Admiralty as was the case last year.


I'm not sure whether the large estimated crowd or rain that began falling in earnest when my friends and I were still in Victoria Park was to blame or not but we remained stuck in the park for far longer than we would have liked -- and even though a friend of mine and I had entered Victoria Park at around 2.30pm, we didn't exit it to start marching on the streets until 4.50pm!  On the other hand, unlike last year, we didn't get stuck in Jardine's Bazaar this time around -- in fact, the rally route didn't include Jardine's Bazaar at all!

Although we shuffled more than really marched, we were at least moving for the most part once we left Victoria Park -- that is, until we came across a long and slow procession of Falun Gong members near Canal Road.  Thanks to their taking a significant amount of street space and opting to not walk by as quickly as they could have, it wasn't until we got close to Wan Chai MTR station that we could take comfortable strides on our journey to Central.  And this despite the tram lanes having been opened to rally participants to walk along from as far east as in the vicinity of Sogo Department Store -- several hundred meters further east than was the case last year.

In the event, the friend I was with throughout and I only made it to the march's end at around 7.50pm -- some four and a half hours after we had met up outside Victoria Park to go into that park together. For all the delay in getting out of Victoria Park and the crawling pace of much of the procession in the streets -- and the lashings of rain that had to be contended with -- however, this July 1 rally's participants generally appeared to be in remarkably good spirits.  Indeed, as my friend observed midway through the march, the overall mood seemed far less angry this year than last year.


Sure, there were chants every once in a while for Leung Chun Ying to step down, and signs visible here and there accusing Hong Kong's current Chief Executive of being an untrustworthy "wolf".  In addition, colonial Hong Kong flags stayed popular among those who feel that Hong Kong was better under the rule of the British than the governments headed by Beijing-backed locals -- though this time around, so too were the flags of Taiwan, Free Tibet and (particularly strangely to my mind) the USA.


Interestingly though, flags touting Hong Kong's independence movement were far less prominent this year compared to last year.  And, as my friend said, it seemed like the rally's participants generally were more intent on "doing their duty" and making sure that they completed the march than shouting slogans or expressing their dissatisfaction in a more verbal manner.

Perhaps it was because the rain and the cooler temperatures it brought helped to cool down tempers.  At the same time, the resolve remained definitely there -- to show the world (and, particularly, the rest of China) that Hong Kongers treasure the Special Administrative Region's (relative) political freedom and are intent on standing up to be counted to help ensure that they -- and their concerns and grievances (which are often social and economic rather than strictly political) -- will be seen, heard and noted by the Hong Kong government and beyond.
Posted by YTSL at 11:59 PM