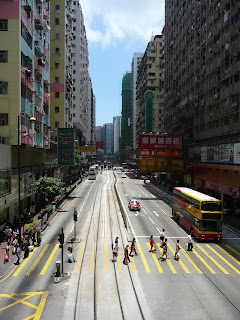 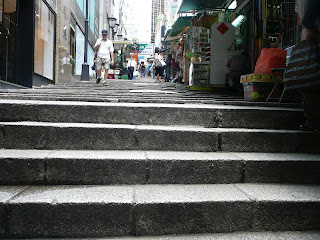 Over the course of less than a week, I've viewed two Hong Kong movies with lead characters who liked to walk about in the city.  Although I wish it weren't otherwise, it's rather unusual these days for me to watch two Hong Kong movies in a week these days.  But while it may be coincidental that the Hong Kong movies I viewed last Sunday and earlier today featured main characters whose preferred mode of transportation were their own two feet, I would subscribe to the idea that there are many people in this territory who share their views on this matter.

Granted that Hong Kong is a place with a great public transportation network that many people can't do without.  At the same time, anyone who spends time in the territory will realize that there are a lot of walking enthusiasts here -- and while it's true enough that many people get more pleasure from strolling (and/or hiking) about in the Hong Kong countryside, I also do reckon that there are quite a number of folks who enjoy traipsing about in the Big Lychee's urban areas as well.

For my part, I enjoy walking in the built-up as well as less built-up areas of "Asia's World City" since I find that in both cases, there frequently is so much that's interesting to see when doing so.  Granted that I also do like taking buses, the MTR, mini-buses, trams, ferries, etc. here (and love that they make it unnecessary for me to own and drive a car).  But it really also is the case that I frequently willingly devote some free time to exploring various parts of the city on foot.

While strolling around Hong Kong, I've come across various streets that are car-free -- notably on islands such Cheung Chau, Peng Chau and Lamma.  Then there are the stepped streets on which it also is unlikely to see bicycles on -- such as Ladder Street in Sheung Wan and the section of Pottinger Street in Central between Queen's Road Central and Hollywood Road.  On them, pedestrians rule supreme -- as much so as on the walkways and underpasses that Hong Kong has its fair share of as well (as at least one blogger realized to her chagrin)! ;b
Posted by YTSL at 11:04 PM

Hi YTSL. When my wife and I were recently in HK, we walked almost everywhere until a friend of ours told us about the Octopus card.

We walked so much that our feet hurt very bad. When we moved on to visit Taiwan, we did more walking and had to get foot reflexology to ease the pain :)

While in HK, a friend told me that actor Anthony Wong once said something like, "People in HK only go to the movies so they can take a break from walking." hahaha

Re the Octopus card: Yes, it's a really nifty thing. I thought every guidebook about Hong Kong mentioned it! Anyway, did your getting it free you from walking because with it, you were more inclined to take buses, not just the MTR?

Still, hurt feet aside, I hope you enjoyed walking around Hong Kong (and Taiwan). :)

Re Anthony Wong: funnily enough, he played one of the characters who liked walking that I mentioned in my blog entry... :)

YTSL--New York City resembles Hong Kong in (at least) two ways: both have excellent public transportation--although many New Yorkers will tell you in great detail just how horrible it is--and both are very "walkable" cities.

Manhattan has a network of subways, buses, car services, jitney cabs and a few other ways to get around and, again like HK, there are real disincentive to owning an automobile, all of which make walking a sensible and enjoyable way to get around.

Hmmm, I have to say I consider Hong Kong a far more walkable city generally than New York, and with better public transportation.

Granted that I've walked quite a bit in New York too. But, among other things, there are lots more parts of New York that would seem like "no go" (i.e., unsafe) areas to stroll around than Hong Kong.

And should you wonder, my second favorite city for walking as well as in general is London. :)

I agree with the NYC-HK comparisons but I have to add that NYC is horrible for crossing the street. Even allowing for the fact that I often would be looking in the wrong direction for traffic I felt much safer as a pedestrian in Hong Kong.

Why are you watching less films lately YTSL?

Re New York City: is it because many of the streets/avenues are so wide and multi-laned?

Re films: er... if you checked the "Most recently viewed movies" part of my sidebar, you'll see I have been viewing MORE films lately -- an average of 5 a week! But now I'm watching a lot more films from other parts of the world besides Hong Kong... ;S

Ah, wasn't looking at your sidebar!

It is because there is no time allotted to cross without cars coming at you. The straight ahead traffic is stopped but you always have cars who want to turn while you are walking across. I can't tell you how many times I have gotten the walk sign, stepped out into the street only to have a car blast his horn at me because I was in the way of his turn.

You are right about the large areas of NYC that most pedestrians would avoid although as a percentage of the total it is probably smaller than, for example, Chicago (still my favorite city in the world). Memory is super-selective and I was recalling walking in Manhattan and Brooklyn. The walk over the Brooklyn Bridge (either way) is not to be missed but large sections of both boroughs should be.

YTSL and Diane--in addition to the built-in difficulties of crossing some streets--almost any of the north/south Avenues in Midtown, for example, there is also the wretched driving habits and lack of respect for pedestrians exhibited by many NYC drivers.

I know what you mean about those turning cars. Beijing was the city where I found that to be the most frightening -- with things made worse by the drivers appearing to have few problems with getting the car up portions of the pavement/sidewalk! ;(

Re Chicago: I have distinct memories of walking south along State Street past Marshall Field's and a few blocks on thinking, "uh oh, I better head back up where I came from..." I also remember reading a book at college which stated that Chicago was (is?) the most segregated large city in the USA...

Oh, and the less said about Philadelphia with regards to "not great"/"no go" areas, the better! Though it's also true enough that I lived for years in a part of West Philly which many Penn students, etc., didn't dare to venture to! ;b