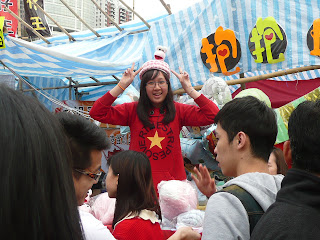 Why is this woman happily posing with a snake hat
on her head? 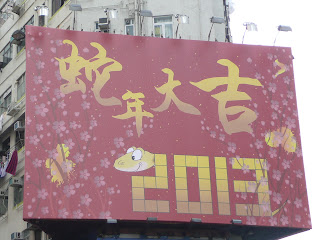 Short answer: because it's now the Year of the Snake
according to the Chinese lunar calendar 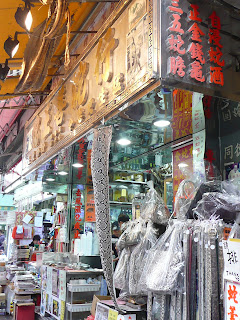 Most of the time though, people in Hong Kong are
more likely to be eating snake or wearing snake skin
belts, etc. than wearing cute snake themed items!
Kung Hei Fat Choi!  Congratulations and may you be prosperous -- for it's time once again to celebrate the start of a new Chinese year!

Because this year is the year of the snake, snakes prominently feature on a number of Chinese New Year ornaments and decorations.  Some people just cannot subscribe to the idea of snakes being cute or looking good though.  So alternative festive symbols and/or characters can be seen around town -- including pandas, and a boy-girl pair dressed up in traditional Chinese garb.

For my part, I find the boy-girl pair (too) old school and dislike the pandas because they look to me like a part of the "Mainlandisation" of Hong Kong.  But it's also true enough that I do find it hard to look upon  snakes as cute, benign and/or auspicious creatures -- though a number of stalls at this year's Chinese New Year Flower Market (which, despite its name, is about more than just flowers) did try manfully to get me and many others thinking otherwise.
At the same time, I do realize that snakes generally have an undeservedly bad reputation.  After all, as I was reminded when I passed by a snake shop in Sham Shui Po this past Friday, it's humans that are more likely to eat snakes than for snakes to eat humans!  In addition, humans not only eat snakes but also do such as skin them and make belts, shoes and other items out of them -- and proceed to sell all of this within the same locale, as is the case at the shop in that part of Hong Kong which still has some very traditional pockets!
Something else I've gotten to realize in the past year or so is that snakes can actually be good looking -- I think particularly here of the sea snakes I saw through the glass bottom of a boat I was on in Okinawa early last year  and also the red-necked keelback that two friends and I saw up close while hiking in Tai Lam Country Park this past January.
In any event, I hope this new snake year will be a good one for us all -- this not least since the most recent year of the dragon is now but a memory! :)
Posted by YTSL at 9:32 PM

Hi YTSL! Happy New Year to you too and hope you have a good Year of the Snake... but I still find them creepy!!!

Better the snake than the rat but yah, you won't any snake plushies at my place for sure! ;b

Happy New Year! I just posted a photo of some Japanese snake bells that I find to be very cute. You'll have to let me know whether you agree!

Happy New Year to you! Snakes are OK - I'm just so glad there's no Year of the Spider...

Okay, I'll go over to your blog in a bit to check out those Japanese snake bells! ;b

Teeheehee re your comments -- but have to say that for my part, I waaaay prefer spiders to snakes! :D

Kung Hei Fatt Choy YTSL! Many happy returns this year of the Snake!

A belated wish of Kung Hei Fat Choi to you!

Thanks and your wishes are not belated at all as Chinese New Year lasts for 15 days! :)