From haunted mental hospital to community complex (and movie location!) 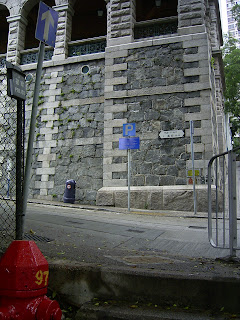 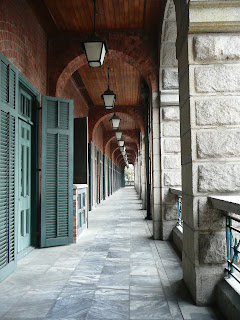 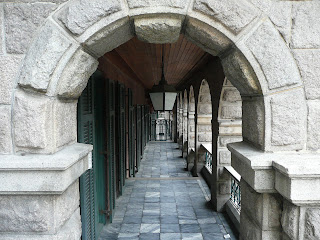 Nowadays, it houses the Sai Ying Pun Community Complex
and looks pretty spiffy to my eyes

After lunch with a friend in Causeway Bay yesterday afternoon, I decided to go for a stroll by myself in a part of Hong Kong that I rarely visit.  First, I checked out Centre Street, where I found men hard at work on the planned Centre Street escalator link that looks like it'll be similar to the Central-Mid-Levels escalator that I first caught sight of in (and will forever associate with) Chungking Express. Then, I ventured along similarly steep neighboring Eastern Street, where I caught sight of the eye-catching Grade I Historic Building on the corner of Eastern and High Streets.

The first time I had passed by the Old Mental Hospital building (back in 2007), I felt something eerie about the place -- and didn't tary in its vicinity.  And this despite my not knowing at the time of its reputation as a haunted location as well as of its history as a former psychiatric facility.

This time around though, there appeared to be a more positive air to the place. So, emboldened, I ventured closer and discovered that it's now the location of the Sai Ying Pun Community Complex.  And, also, that its outdoor corridor area is a photographer's delight!

Upon further research, I've found that, sadly, only the exterior of this heritage building has been preserved since the interior had been damaged by two fires and gone into disrepair through the building having been vacant for a number of years.  On a brighter note, this Hong Kong movie fan was happy to also have discovered that its facade has appeared in at least two Hong Kong films: Wong Ching Po's Jiang Hu (2004) and Benny Chan's Invisible Target (2007).  The building may also have been used in a Soi Cheang movie -- but someone will have to confirm that this is so, and additionally provide the title of the film in question! ;b
Posted by YTSL at 9:20 PM

From visiting your blog, I know you do! :)