What Anthony Bourdain missed in Penang 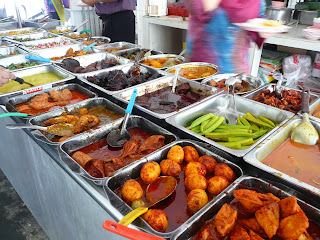 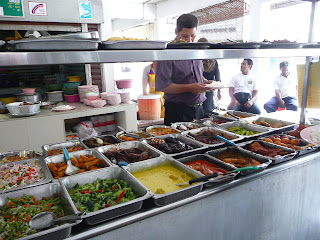 There are so many delicious choices to be had that even
regular customers need to pause to ponder a while
what they want to have for lunch when they visit! ;b 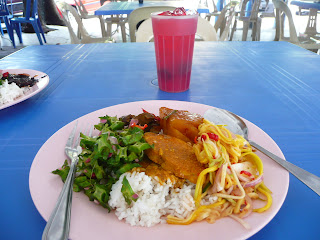 My choice on my most recent visit -- including
a drink of ice rose syrup water with a lime for added flavor!

A couple of weeks ago, thanks to the wonders of Youtube, I watched the No Reservations in Penang episode that had aired in the US on June 4th.  Fortunately, because I knew I'd be back in Penang soon, I wasn't too jealous of No Reservations' main man, Anthony Bourdain, getting to eat all sorts of delicious dishes in that part of the world.

In the very first season of No Reservations, Anthony Bourdain and his crew had visited Malaysia -- but, inexplicably to me (and many other of the region's foodies), had not included Penang in his itinerary then.  So it seemed long overdue for him to feature Penang -- but when I have to say that the wait was worth it.  Put another way: I really do reckon that he generally did good by it -- and has made many a Penangite happy and proud in the process.

At the same time, I have a couple of quibbles re the representation of Penang and its food scene.  One of these is that Penang (like with Hong Kong) is both an island and a larger territory (that includes other islands and a "mainland" -- with Penang's being part of Peninsular Malaysia).  The second is that I'm surprised that, aside from the opening shots focusing on nasi lemak, such short shrift was given to Malay foods in No Reservations' Penang episode.

With regards to the latter: Anthony Bourdain clearly enjoyed the bowl of assam laksa that he had at the Air Itam market and it's true enough that particular stall would be many people's choice for best Chinese assam laksa place. However, this Penangite actually prefers Malay assam laksa -- with its soupier (rather than thicker) broth, softer (less "springy") noodles and less generally tart taste (due to it not having pineapples in its mix unlike the Chinese version) -- and specifically, those cooked up at the Laksa Tanjung Bungah stall over at Shamrock Beach.

And while I also would recommend nasi kandar as a "must try" for foodies visiting Penang, I really do like my Malay rice options as well as Indian Muslim ones.  Consequently, while I did make a point to revisit Hameediyah for my nasi kandar "fix" (rather than Anthony Bourdain's choice of Line Clear), I also was very happy to have managed to fit in lunch at the Malay "economy" rice stall in Tanjung Tokong that's located in the shadow of the fishermen's flats.

For those who are wondering, the toppings I chose for my rice consisted of (from left to right in the third photo from the top of this entry): crunchy winged bean, red onion and chilli salad, rich-tasting curried beef kidney (don't knock it until you've tried it!), meaty-tasting curried fish roe (ditto!), a sweet and spicy curried pineapple chunk, and a tangy mango, onion and red chilli salad.  All this -- and my rose syrup drink -- for less than 6 Malaysian dollars (i.e., less than US$2 or HK$15).  So yes, a real bargain -- one more thing about Penang food that Anthony Bourdain forgot to mention... but I'll forgive him for that as I get the feeling he was enjoying his Penang food too much to notice how much (or, rather, little) it all cost! ;b

I'm a big Bourdain fan and the one thing this episode accomplished was whetting my girlfriend's appetite for a trip there. She's never been there; I've been there twice (but the last time was 10 years ago) and am anxious to return. So after watching this, she's ready to go there too.

By the way, K.F. Seetoh, the Makansutra guy, has a series running on Asian Food Channel now on Malaysian food. I think it's called Food Surprise. He and his crew turn up at different hawker stalls unannounced and taste their stuff. He had an episode that featured him going seemingly everywhere in Penang except Georgetown. Really gets you hungry.

I think it's great that people will want to go visit Penang after seeing the No Reservations episode. I hope you and your girlfriend have as great a time eating in Penang as you did when you visited Vietnam (as related on your Hongkie Town blog). :)

Everything looks tasty. Were your choices favorites or do you have something different each visit?

If I see curried pineapple, I always go for that. I really love it! The others are swappable with other dishes -- but I do like to have one or two vegetable options/salads in the mix. :)

Great post for filling in the gaps, YTSL! I think Bourdain is good for getting people set in the right direction, but inevitably there will always be some gaps in what he covers. And, of course, taste is subjective so one person's favorite place may not be another's! I know that I have only scratched the surface when it come's to Penang's food, but I just see that as an excuse to keep going back!

Definitely re taste being subjective. Take Indian mee goreng and mee rebus for example: my father likes the stall behind the Chinese Recreation Club best, my mother and I favor the one that used to be at Edgecumbe Lane (but now is located along Gurney Drive) while my sister likes the one on Jones Road whereas my brother doesn't seem to care much for mee goreng or mee rebus! ;b