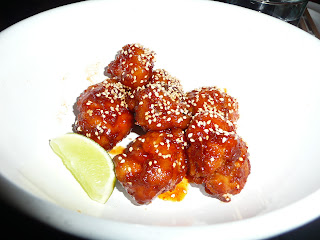 The famous KFC at Yardbird 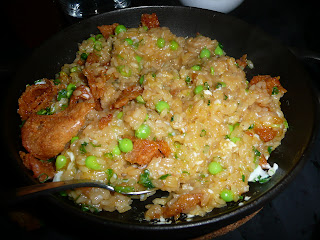 The less heralded but still plenty delicious -- as well as
super filling -- rice topped with chicken skin and peas,
and with an onsen egg mixed into it all 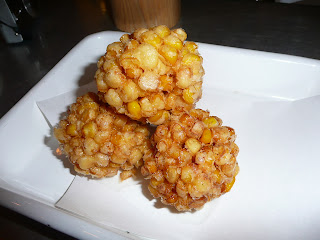 Earlier today, a friend and I were discussing what governs our decisions with regards to such as where we want to travel.  I think she was somewhat surprised when I told her that there have been places I've felt compelled to visit after reading about them (be it in a newspaper, magazine or book, or on a website or blog) or seen them in a movie.  (For example, I'd credit a Time magazine article about the Cheong Gye Cheon stream with making me want to go to Seoul to walk along its banks and it was only after having viewed Fatih Akin's In July that I got a strong urge to visit Istanbul (and its suburb of Ortakoy in particular.)

Last night, that same friend and I enjoyed our second dinner at Yardbird, a trendy specialist yakitori eatery owned and operated by New Yorker Matt Abergel. (She wrote about our first dinner there here.)  Funnily enough, I'm not sure if I told her but the two things that made me really want to check out that eatery just happened to be: its inclusion in a blog entry about Hong Kong's best Japanese restaurants over at Tom Eats Jen Cooks; and my discovering Yardbird serves sweet corn tempura -- something I've longed to eat after seeing it being consumed with relish in Hirokazu Kore-eda's touching Still Walking.

Something else that I found somewhat amusing is how despite its being billed and viewed as a yakitori joint for the most part, my three favorite dishes at Yardbird actually do not have any chicken in them.  To be sure, their chicken oysters skewers are definitely worth trying and I also would recommend the rice with chicken skin along with peas and an onsen egg, particularly if you're looking for something truly substantial on the restaurant's menu.

However, I easily could forgo both those chicken concoctions -- or, for that matter, all of Yardbird's other chicken offerings -- in favor of its delicious Korean Fried Cauliflower (i.e., cauliflower encased in batter that's glazed with a sweet and spicy sauce, on which sesame seeds are sprinkled), tasty stir-fried brussels sprouts garnished with garlic chips and -- this especially! -- addictive balls of sweet corn tempura.

One of the reasons, my friend and I wanted to return to Yardstick for a second round of eats in a month was that on our first visit, the waitstaff had forgotten to serve us the dish of Korean Fried Cauliflower that we had ordered (but fortunately were not billed for either).  After finally sampling the KFC last night, I can definitely understand why it has its fans.  But for my part, the sweet corn tempura -- which I've never seen on the menu in any other restaurant I've visited to date -- is the special dish of this Sheung Wan eatery that's pricier than I would like (especially if looked upon as a "yakitori joint") but still definitely can see myself dining at again in the future.  :b
Posted by YTSL at 10:52 PM

(hmm... "vegetarian favorites at Yardbird"... but "rice topped with chicken skin and peas,"?

Yes, indeedy, re my being a foodie! Re vegetarian favorites... did you read the part of the entry where I wrote about my three favorite dishes at Yardbird? ;b

Haha..! Yes I did. Only I was 'overwhelmed' when I first read 'chicken skin' :p

BTW did I ever told u I've turned full time vegetarian?

Well... even with that dish with the chicken skin, it was mainly vegetarian... rice and peas. ;b

But wow re your having turned full time vegetarian. So you don't even eat seafood like many Malaysian "vegetarians" are prone to do? :O

This all looks SO good!

Heheh re the KFC name... and yeah, somehow, I don't think Kentucky Fried Chicken will sue... ;b