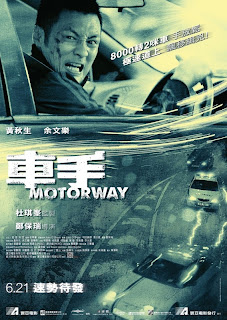 Motorway's poster emphasizes
its lead actor and the car action

Is Soi Cheang auteur material or just a journeyman filmmaker?  Not so long ago, I'd have been inclined to say that there was a recognizably gritty "Soi Cheang" element and strain ran through such films as Diamond Hill (2000), Home Sweet Home (2005) and Dog Bite Dog (2006).

However, not much of that Soi Cheang style is all that obviously apparent in the director's latest movie that, as was the case with Accident (2009), is a Milkyway Image work (head) produced by Johnnie To.  Indeed, I'd actually venture to suggest that Motorway may well be one of the most generic feeling Milkyway Image movies I've viewed to date.

It doesn't help that this crime actioner's story (that comes courtesy of Joey O'Bryan) really doesn't come across as anything special -- and, indeed, can seem like it would be more at home in "by the numbers"  Hollywood than Hong Kong, or at least the often super risk-taking, quirkier and wilder Hong Kong cinema of yore.  Simply described, the movie's about a hot-headed rookie cop with a partner who's on the verge of retirement, and an ace get-away car driver who both policemen have personal as well as professional reasons to want to bring to justice.  Put this way: Many film viewers should, from reading the previous line alone, be able to predict the fates of all three of the cinematic effort's main characters.

On the other hand, it's not every day that a movie can boast having Shawn Yue playing the rookie cop and Anthony Wong taking on the role of his veteran policeman partner -- and the sheer "watch-ability" of this pair of actors really does help save Motorway from being boringly average.  Coming off a winning performance opposite Miriam Yeung in Love in the Buff, the younger man -- who I have to admit to having a bit of a soft spot for ever since Just One Look (2002) -- shows that he also can hold his own next to Anthony Wong, now firmly established as one of contemporary Hong Kong cinema's biggest as well as more charismatic star actors.

Actually, I'd say that the film generally benefits from having a cast so good that one often finds oneself wishing that many of the actors -- and, in particular, the three actresses who feature most in the work -- had more screen time than they do.  In addition, Chin Kar Lok's action direction and his stunt team are deserving of praise -- since even someone like myself who is not a car fan was feeling the adrenaline pumping during more than one of Motorway's many car chase scenes!

All in all, my take is that there's an admirably professional look, feel and quality to this Milkyway production.  And while I did find myself wishing that there were more exciting twists and interesting touches to Motorway's tale to give the movie more of a "spark", I'm also grateful that -- unlike certain of their colleagues (like those behind such as *cough, cough* Murderer) -- its filmmakers did resist the seemingly all too common urge to come out with some surprise mega "development" midway through or close to the final straight that would turn it into one massive car wreck of a movie!
My rating for this film: 7
Posted by YTSL at 11:58 PM

Hi YTSL, I look forward to seeing it whenever I get the chance and your thoughts pretty much echo my expectations for the film. I think Shawn Yue is the great hope of his generation for an actor who can deliver for the length of time Master Wong has, fingers crossed!

Indeed. Hollywood and even continental action movies have become so ritualized while paying obeisance to screenwriting story arcs and iron rules of story development that you can set your watch by what is happening (or what you know is about to happen) on the screen.

For example if it looks as if the hero/heroine has solved the crime or disarmed the bomb or killed all the zombies for the final time, expect another 12 minutes or so with reversals and revelations before the final credits roll.

I hope you'll find "Motorway" to enjoyable viewing -- and I think it'll help to keep your expectations low re the film. Re Shawn Yue: I felt his career stuttered a bit on the back of the likes of "Shamo" (directed by Soi Cheang). But 2012 really has been a good year for him thus far.

Hollywood remains *the* film industry for me that produces predictable movies. Chalk it down to having viewed too many movies already in my life but I often feel that I can predict the outcome of a Hollywood movie after viewing it for 5 minutes -- or 10 tops.

And to my mind, Korean cinema is *the* cinema most guilty of having a twist and unnecessary addendum after the normal conclusion. Often times, I feel when watching a Korean film that if only they ended at the "first/false ending" rather than the final one, the film would have been a better one!