A hike along the Shek Pik Country Trail (photo-essay)

Along with the nearby Nei Lak Shan Country Trail (along which I had my favorite hike of 2010), the Shek Pik Country Trail was announced as having permanently closed to the public in June 2008 as a result of having been damaged by landslides caused by heavy rain that came along with a passing typhoon.  Upon learning of this, I was upset -- not least because I had been eyeing that particular Lantau Island trail as one that I might want to go on.

Happily, a couple of years on, the authorities elected to re-open the steep 5.5 kilometer trail that, after being on it, I suspect may have been used in days of yore by pilgrims making their way up to the Po Lin Monastery up on the Ngong Ping plateau.  So, one late spring afternoon, my then regular hiking companion and I decided to descend from Ngong Ping to the banks of the Shek Pik Reservoir along the trail -- i.e., the hard way, by my reckoning, since I often find it far more difficult to go down a steep trail rather than hike up it!  (For the record, one reason why I only have enough suitable photos for just one photo-essay is because I was obliged to spend quite a large part of the hike carefully watching my step rather than being able to comfortably look all around me for interesting sights, including scenic vistas and cool bugs!) 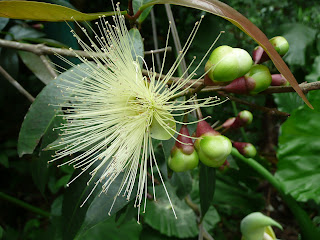 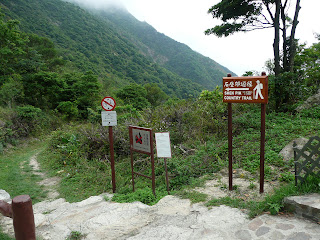 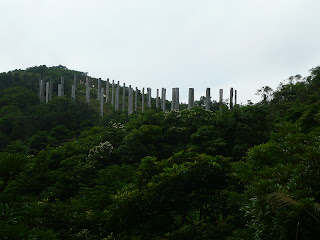 View of the monumental carvings of the Wisdom Path which looks
ancient but actually were only completed in 2002! 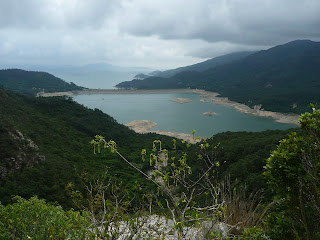 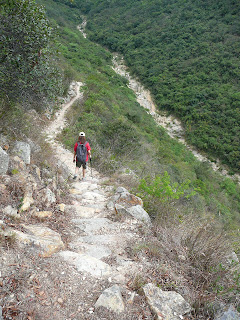 Along a part of the trail that looks close
(in more ways than one)to a dry river bed! 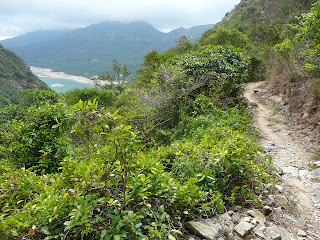 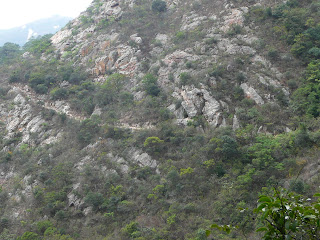 Looking at the trail carved into the hillside, one has
to give kudos to those who created it -- far more
than those who go ahead and go along it! 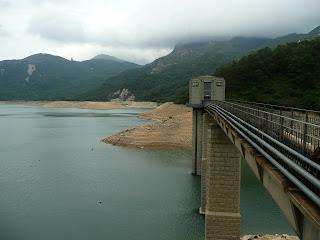 Shek Pik Reservoir at long last -- and to get a sense of how far
we had come, realize that we had started our hike from near
the Big Buddha that looks so very small in this particular photo! :b