A dinner at the Hong Kong branch of RyuGin 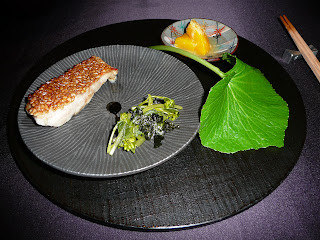 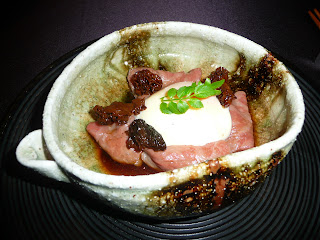 course #7 of the same kaiseki dinner 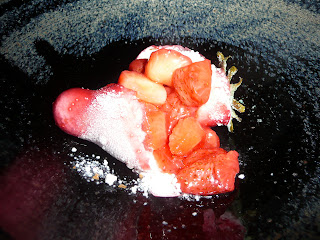 Two Mondays ago, I had a very enjoyable dinner with a friend at Yardbird, a trendy Sheung Wan eatery with a trendy urban American vibe and delicious yakitori and -- truly my favorite of what we ate there -- corn tempura (a dish I've wanted to eat ever since I learnt of its existence by viewing Hirokazu Kore-eda's Still Walking at the 2009 Hong Kong International Film Festival!).  The day after, we found ourselves discussing when we should next go again to that restaurant; with my deciding that it should be a while before we do so as that would help maintain the sense of "specialness" of going there for a meal.

This past Monday, I had an even more memorable meal with the same friend at the new Hong Kong branch of a Japanese restaurant whose main branch has been awarded three Michelin stars.  Even before dinner had ended, we were discussing when we'd go back -- or, more accurately, if we would ever do so... not because the meal we had at RyuGin that evening was not fabulous but because the prix fixe dinner cost HK$1,980 per person (and no, that does not include service charge and alcoholic drinks)!

In large part because I didn't have to pay for dinner* (and, for that matter, neither did my friend), we didn't fixate on the price of the meal and, instead, obsessed about the food we were served that evening -- some of whose ingredients I previously never knew existed, never mind had tasted.  Also revelatory were some of the modes of preparation and the food combinations that the chef (Hideaki Sato is chef Seiji Yamamato's top apprentice) had come up with.

As an example, course #1 of the meal involved a clever play with texture by featuring creamy sea urchin wrapped in crispy deep fried seaweed, with comforting spring potato soup topped with fuki served on the side, while course #2 -- my least favorite course of the dinner, actually -- took a piece of rich foie gras, flavored it with Porto and Wasanbon sugar, and served it with fresh figs and sesame cream sauce to produce a close to way overwhelming mix of various distinct tastes.

So far, pretty good, I was thinking but then there came two courses that truly propelled me up into foodie heaven.  The charcoal grilled Alfonsino topped with roasted rice (the main part of course #6) may not look like much in the photo at the top of this blog entry but it tasted out of this world as far as I was concerned -- with the Alfonsino tasting and also having a texture like a sublime cross between cooked Wagyu beef and Otoro sushi, and the roasted rice on it helping to give it the most incredibly delightful "mouthfeel".

Course #7 was described as "Sukiyaki" on the furnished menu but it was not like any sukiyaki I've eaten before -- not least because it didn't contain as much liquids as more traditional versions of that Japanese dish.  Rather, it was like all the soup in a conventional bowl of sukiyaki had been distilled into the sauce at the bottom of the small bowl that bore a substantial mouthful of obviously prime Wagyu beef sirloin on top of which lay a tasty onsen tamago (hot spring egg), white asparagus and morel mushrooms.

Course #8 -- rice simmered in sakura tea and served with many tiny deep fried sakura shrimp -- is one I could see some people getting wowed by.  The problem for me is that the shrimp reminded me too much of the shrimp used in some varieties of Malaysian nasi lemak -- so felt too familiar to be exciting.

On the other hand, course #9 really did create a sensation for both diners at my table.  RyuGin's signature dessert, it is a creative play of, among other things, contrasting temperatures as one part of the dessert is served at -196 degrees Celsius and the other part at +99 degrees Celsius.  Amusingly, our server actually warned us to make sure we ate a mix of those two parts of the strawberry dessert in each mouthful of it, otherwise our mouths might get alternately burnt or frozen when eating this particular dish!

We greeted the final course -- a second round of desserts; this one comprising of separate mini-helpings of green tea flavored mochi, ice cream with a sprinkling of matcha, and most unJapanese (but definitely delicious) creme brulee -- with mixed feelings.  For my part, there was a part of me that was loathe to have this amazing meal come to an end.  At the same time, my taste buds were actually getting tired -- and, frankly, suffering somewhat from shock!

Before bringing the meal to a close, my friend and I lingered over a bowl of matcha that did help refresh and final cups of the house sake, a daiginjyo exclusively brewed for the Hong Kong branch of RyuGin by Kokuryo.  Upon leaving the restaurant, we discovered that our meal had taken us close to 3 1/2 hours to finish!  We noticed that at least one party of diners had entered the restaurant after us but left before us and wondered how they could have possibly eaten so quickly.  For, truly, dinner at RyuGin should not be rushed.  Indeed, it seems to me that food as excellent does need to be savored to really appreciate the beauty as well as deliciousness of it all.

*A qualifier might be needed that this is NOT a paid-for review!  Rather, this blog entry was written just because I felt a need to put down some thoughts about the meal to help me to remember it more accurately by! :)

Thanks for (your continued) reading and commenting. :)

Alfonsino: is it a good fish, they sell it here, I have never bought it. It's red fish right?

Yes, Alfonsino is a red fish. (I discovered that via a Google search, actually!) Re whether it's a good fish: well, this past Monday was the first time I ate it -- and have to say that it was truly delicious. But how much of that was due to the skill of the chef and how much due to the quality of the fish itself, I'm not quite sure! ;b

I ent to the first shop, there was no Alfonsino today. It is a cheap fish. I bought 2 blue cod. An old Chinese man customer tells me the Chinese like this, My daughter's coming home for dinner. Steamed blue cod.

If the Alfonsino is a cheap fish, then either it's way under-rated/appreciated in New Zealand or the chef who cooked the Alfonsino I ate this past Monday truly is a master. That Alfonsino morsel was absolutely delicious -- the best bit of the whole meal, in fact! ;O