Around greater Mui Wo (Photo-essay)

One of the reasons why I love hiking in Hong Kong is that it can often "fill in the blanks" in my imagination when looking at a map of the territory. Another reason is that it allows me to venture to parts of the Big Lychee which one can't if one were to solely rely on such as public transportation (or, in some cases, even private cars).

And such was the case for the most part when two friends of mine and I hiked from Mui Wo, the sprawling but largely low density town on the eastern coast of Lantau Island that's served by ferry as well as public bus, to Tai Ho Wan, a body of water that borders the North Lantau Highway. For while the hike began and end in accessible locales, its trail effectively cut across land which were not accessible to vehicles for the most part -- and which I'd venture to suggest that few people other hikers and area residents are likely to pass through.

First, however, here's presenting some photos of the greater Mui Wo area taken during the hike (for yes, this Mui Wo to Tai Ho Wan hike was one of those excursions that yielded enough photos for more than one photo-essay... ;b):- 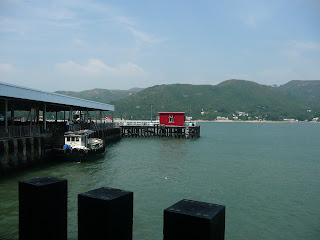 Scenic view of the ferry pier at Mui Wo 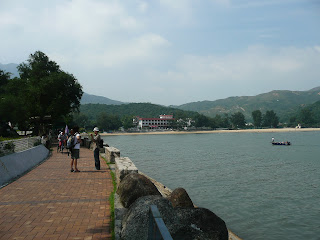 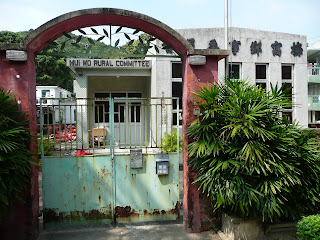 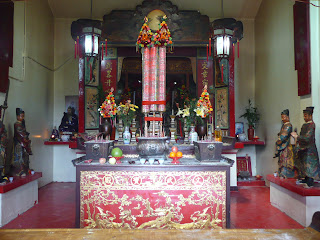 Inside the Man Mo Temple located in the Mui Wo area 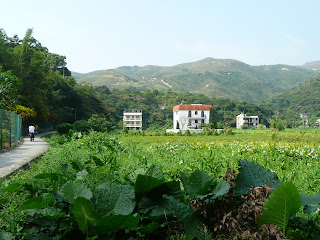 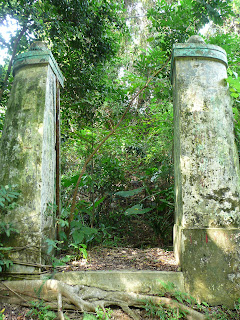 At the same time, I also can understand why other people
would be inclined to abandon their homes in this area
to go to other, more "buzzing" parts of the territory 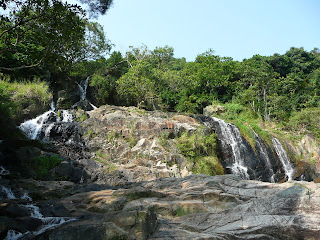 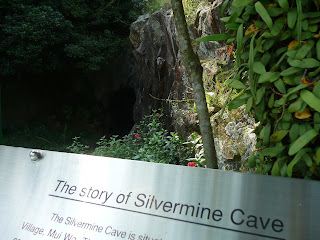 The Silvermine Cave that gave Silver Mine Bay its name
is so modest looking these days that it could very easily
go unnoticed if not for the nearby sign which tells
"the story of Silvermine Cave"!
To be continued (in terms of there being more hike -- as opposed to Mui Wo area -- photos to come!)! :)
Posted by YTSL at 9:37 PM

The view of the ferry pier at Mui Wo is a lovely image--I really like the small, bright red structure right in the middle. It stands out from (and sets off) the blues and greens that make up the rest of the photo.

Quite a set of contrasts among the ferries serving Hong Kong's outlying islands. The catamarans are as modern as space ships while the Inter-Island ferry boat and the Aberdeen to Sok Kwu Wan wouldn't look out of place in a harbor from 80 years ago.

Thanks for your comments. Re your second paragraph: I'm glad you click on the links that I supply as well as view my photos and read my writings. :)

I so enjoy your photos of homes/houses in the wild (so to speak). Whether inhabited or not ther is something about them that appeals to me.

I'm intrigued by your liking to see photos of homes/houses in the "wilds" of Hong Kong. Is it because you find similarities with those in Vermont or because they seem like such a study in contrast? :)

A study in contrast. The architectural style is so different. However even though the "stuff" outside the homes is different it's similar in that it looks like a hodge podge both here and in Hong Kong.

Something I'd add about village housing in Hong Kong: a lot of it is actually not that old (i.e., not more than 50 years old), yet often can look ancient -- at least to my eyes! ;O

Loved my stance at Mui Wo to the extent of regreting to go anywhere else in case of travelling to HK. Your pictures show everything about the place, new and old, and is shocking to see that many people do not believe those landscapes are so close to HK buildings.

Thanks for commenting but I have to admit that I'm not quite sure what you mean in your first sentence. As for your second sentence: yes, there really are parts of Hong Kong where the residents live closer to nature than many people who have never been to Hong Kong realize can be the case. :)