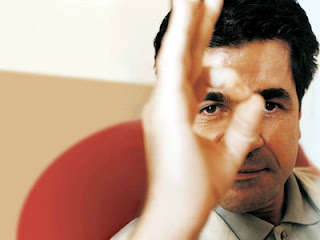 - This Is Not a Film (Iran, 2011)
- From the Master Class program
- Jafar Panahi and Mojtaba Mirtahmasb, directors
- Starring Jafar Panahi

Finally, we (or, rather, I) get to discussing the final work that I viewed at what turned out to be an actually pretty satisfying -- and satisfactory -- 2012 Hong Kong International Film Festival.  And yes, I do find it a bit strange that I watched an equal amount of Iranian and Hong Kong films at this year's HKIFF -- and a whole lot more Japanese movies than Hong Kong as well as Iranian films (see reviews here, here, here, here, here and here) -- but I guess that goes to show how international this film fest really is...

Getting back to This is Not a Film: we're talking here about a homemade documentary by two Iranian filmmakers --one of whom is under house arrest and officially banned for 20 years for directing and scripting a film (but not appearing in one), the other of whom was jailed for three months after this film was made -- that truly was made, and made available to be viewed, against the odds.

The conceit here is that this is not a film but, rather, a discussion by Jafar Panahi about a film that he would make if he could.  Within the confines of his apartment, on a day where his wife and child have gone out and left him alone to do such as look after his daughter's pet iguana (named Iggy and who makes a memorable guest appearance in the film that left me pondering how it surely must not be coincidental that pets end up having not insubstantial roles in both this film and Mohamad Rasoulof's Goodbye), Panahi gets filmed by documentary filmmaker Mojtaba Mirtahmasb discussing filmmaking but, also, going about his daily life as best his can.

The result is unorthodox but not at all uninteresting.  There's a surprising amount of often inadvertent humor -- including when Mirtahmasb chastises Panahi for trying to direct the film since he's officially banned from doing such a thing.  Still, what most clearly comes across in this surreptitious glimpse at the drudgery that now passes for life for an Iranian filmmaker under house arrest but still obviously bursting with ideas is how ridiculous as well as frustrating the constraints can feel and be.

To be sure, the surroundings in which Panahi has been confined actually look physically comfortable.  And presumably he's not entirely cut off from the world since he's shown doing such as talking to people on a mobile phone, working on a computer, viewing videos on a large screen television -- and even being allowed to be visited by the likes of Mirtahmasb and also to interact with other people in his apartment building.

Nonetheless, despite it not being made explicit, there surely must be some frustration at not being allowed to go out with his wife and daughter, and to enjoy the activities associated with a festival that was taking place on the day that this film was shot.  Consequently, what we have here is a sad reflection of the state of Panahi's life in Iran (and, by extension, the circumstances of Iranian filmmakers) -- but, also, a powerful statement of his courageous as well as dogged commitment to continue being involved in filmmaking, in whatever way that he is allowed (or, rather, is allowed to get away with doing).