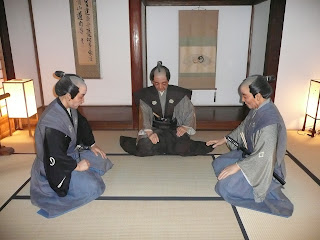 Japan may no longer be a feudal society but, to judge
from some of the films screened at the HKIFF,
samurai and their ilk still have salient places in
the Japanese contemporary (cinematic) imagination

This movie directed by one of Japan's top comedians was billed as family(-friendly) fare by the 2012 HKIFF's PRs.  But although its lead female character is a physically cute as well as immensely precocious acting preteen girl, I would definitely urge caution in bringing children to check out Scabbard Samurai.

To be sure, there are plenty of "laugh out loud" comedy moments in the film -- and of the kind that is very broad as well as physical.  These mainly come from the efforts of the movie's main character, a sword-less samurai (essayed by Takaaki Nomo) who is so down and out that his daughter (the precocious girl played by Sea Kumada) takes to pleading with him to spare her and him further humiliation by committing seppuku, to make a lord's depressed son smile -- and, in so doing, escape being put to death for having deserted his duties and clan.

But therein also lies the rub: to wit, that it's impossible to escape from the fact that Scabbard Samurai revolves around the increasingly elaborate -- and desperate? -- attempts of a disgraced man (whose young daughter spends most of the movie showing much disdain towards) to literally avoid getting his head cut off. Alternatively put, the laughter evoked can be genuine but at least one member of its audience (i.e., moi) couldn't help feeling that the comedy on display had a cruel side to it -- this not least because it often felt that the movie's main character had been more or less reduced to becoming a cross between a performing monkey and the victim of other people's schemes and experiments.

My feelings of unease were not helped by the protagonist acting in a far more passive and pathetic manner than any member of a warrior class/caste is expected to for much of the movie And my sense that there was an air of hapless desperation to his efforts only added to my general viewing discomfort.

At the same time, there was something heartening about seeing a man not just give up outright and entirely despite the odds and much of the world appearing to be against him. In addition, it does make one want to cheer along with others in praise as well as to encourage an anti-heroic individual who exhibits the kind of dogged spirit on show in this film.

Scabbard Samurai also undoubtedly gets points from me for originality.  Still, the truth of the matter is that I found its dramatic emotional swings and the filmmaker's general approach to be too disarmingly oddball to make the viewing of this cinematic offering to be an entirely enjoyable experience.

My rating for this film: 7

Before the screening of People Mountain People Sea that I attended as part of the 2012 HKIFF, its director -- who won the Silver Lion for Best Actor at last year's Venice Film Festival -- briefly appeared before the audience and was given an enthusiastic reception. Quite a bit of clapping followed upon it being announced that he would be available for a Q&A after the screening.

But as the credits rolled at the end of the 91 minute work, quite a few members of the audience made for the exit -- including, I have to admit, myself. And while one reason I left at the time that I did was that I was hungry (due to my having gone to the evening screening straight from work and consequently not having had time to grab a bite to eat), the truth of the matter is that I also didn't feel like the director would be saying anything to change the opinion I had come to form of this film that left me with some visually indelible memories but also seemed to be far more opaque in meaning at times than it should have been.

Shot in long takes and sparse in terms of dialogue, People Mountain People Sea is the kind of work that gives you plenty to look at and think with.  Some of the shots are beautifully framed, especially those featuring scenes of mountains and narrow, curvy and sparsely trafficked roads. But many more show (reveal?) scenes of Mainland China, both urban and rural, that look like they come out of many people's nightmares -- with those that take place in an illegal coal mine appearing to depict a hell on earth, with people reduced to near wordless brutes.

Perhaps if the film's gruff protagonist (a rural man with urban experience portrayed by Chen Jiangbin) spoke more, he'd be more understandable and sympathetic.  As it is, this man's motives for much of his actions are difficult to fathom. Granted that it's easy enough to see that he'd want to go look for the man who coldly murdered his younger brother for not much more than a motorcycle, especially after the police were able to tell him who the killer was but were unable to apprehend the culprit.

But the main character's methods to try to find the killer in the urban maze of Chonqing's shantytown(s) seemed way too simplistic. Furthermore, he just seemed way too easily sidetracked from his quest -- even if only temporarily -- in favor of going and reacquainting himself with a woman (Tao Hong) living in that city of 35 million inhabitants who clearly was the mother of at least one of his children even if she just as clearly was the wife of another man.

Although there are people who have problems with the final section of the film, I actually think that it's the strongest part of People Mountain People Sea. Admittedly, when I was watching it, I didn't quite understand what was going on.  But after thinking some more, I felt able to figure out what had happened -- and, in the process, was able to (finally) discern some humanity in a main character who previously had come across alternately as a cypher and man who his society and surroundings had made into an insensitive ruffian.

My rating for this film: 6