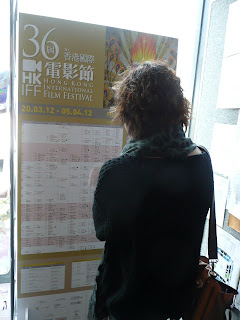 For many foodies, El Bulli was the culinary equivalent of Mecca for Muslims -- a not easy to get to, far away place (in this case, a restaurant located in the Catalonian countryside, near the town of Roses, population around 20,000) which one aspired to go to some day. Alas, a visit to that much lauded dining establishment whose head chef, Ferran Adria, has been awarded a record 26 Michelin stars will forever remain but a dream for most of us as El Bulli closed down in July of last year.

So perhaps the closest we can get to achieving that dream is by way of viewing El Bulli: Cooking in Progress, German filmmaker Gereon Wetzel's reverential documentary showing how Ferran Adria and his team go about conceiving dishes, deciding what will get on the El Bulli menu and then preparing the meals that were shown in the film to comprise 35 dishes (but a friend who has visited told me also has, depending on the year and season, go up to 50!)!

Before going into the evening screening of the film I attended, I had made sure that I had eaten and was feeling on the full side. This is because more than once (including after viewing Oxhide II at the 2010 Hong Kong International Film Festival), I had come out of a film screening featuring cooking scenes feeling extremely hungry and in need of physical nourishment! (Also as evidenced by my account of eating grilled blowfish sperm, I can get massively fixated on certain foods I saw being consumed with great relish in movies!)

Still, it came as a bit of a surprise that viewing El Bulli: Cooking in Progress actually left me with a more satiated feeling than ready appetite for food. Perhaps this was because the documentary not only contains so many scenes of not only undoubtedly delicious (as well as interesting) dishes being prepared -- and a photographic catalog of the 35 dishes served at a single dinner -- but quite a few shots as well of people (particularly Ferran Adria) tasting and consuming a lot and real variety of edibles.

Actually, it might also be because, as Ferran Adria observed at one point in the film, that particular year's menu featured a lot of liquids -- because I actually came out of the screening feeling like I wanted something nice, cool and liquid to have flowing down my throat! (In particular, I really was intrigued -- and wished that I could have tried -- the savory dish that included ice in it, another culinary creation that was shaped to resemble a frozen rose (that I could imagine being thirst-quenching as well as refreshing), and the cocktail that was made by mixing nut (peanut? hazelnut?) oil with water!

More than anything else, however, I came away from viewing this documentary homage to El Bulli feeling very impressed by the attention to detail and creative strivings of its team of chefs (with Ferran Adria's right hand man, Oriol Castro, coming across as particularly dedicated). And even while viewing this film can go some way to providing reasons why and how it came to be that the restaurant actually operated at a loss for the past 10 years or so, it also shows that the lack of financial profits were the result of an admirable striving for culinary originality and mastery -- the likes of which few, if any other, other chefs think of going for, never mind actually put into practice.

In searching for reviews of this 2011 film from Tsutomu Hanabusa, I discovered that there aren't too many about -- at least not in a language with Romanized script. If this is a sign that this creative and fun comedy set in a Japanese boys high school and revolving around a group of Theater Club members hasn't been seen much, then that's really a crying shame -- because, in all honesty, I reckon that this is a work that has much to offer to audiences, in Asia and beyond.

To judge from the reactions of the audience at its HKIFF screening last night, Go! Boys' School Drama Club also is the kind of movie that's optimally viewed in the company of others. Because while it's cool to be able to enjoy a film on one's own, it really can make for a great experience to be in a large audience who are uniformly laughing out loud in enjoyment when taking in the kind of feel-good movie that's set in a world in which there are few, if any, really heartlessly bad and cruel people (a la Hayao Miyazaki's My Neighbor Totoro and Ponyo on the Cliff by the Sea).

In addition to the three mentioned movies all being from Japan, they also do share a certain inventive zaniness -- the kind that produces wildly slapstick moments whose goofiness only adds to, rather detracts from, their being entertainingly inspired. Tsutomu Hanabusa appears to explicitly recognize this in his comedy -- by having his protagonists be labelled baka (idiots) and loudly proclaimed to be so, by people who turn out to be their admirers and fans (as opposed to critics or detractors), and the protagonists themselves.

In a movie about schoolboys with a passion for theater, it makes sense for two particularly crazy-amazing scenes in the film to involve their performing of a couple of plays. Hopefully without revealing too much, the first of these involves their staging of a theatrical version of the famous Japanese legend of the Peach Boy (Momotaro) -- during which it is belatedly realized, mid-performance, that the jock turned theater club member with a key part in the dramatics doesn't actually know how the story is supposed to go! -- while the second is a production of American author O Henry's The Last Leaf in a way that few people could ever have imagined, never mind think could actually turn out to be effectively moving even while also be largely and incredibly hilarious!

Something else that I also really loved about this movie is how each of the protagonists is very defined and distinct in personality. Granted that theirs may be deemed too one-dimensional but I do appreciate that they're easy to identify by personality as well as physical appearance. And all fun to watch too.

Go! Boys School Drama Club was a lot of fun, and I really liked the play they put up :D

What is the name of the pop girl group, the favorite of kanda?

Sorry, I can't remember as I viewed the film more than a year ago! Anyone out there who can help?