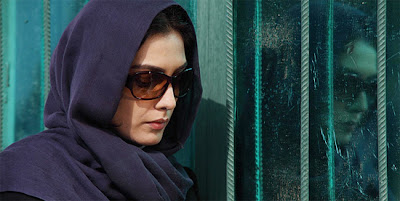 Close to three weeks ago now, I went to UA Langham Place for the second last screening on my 2012 Hong Kong International Film Festival schedule.  As I sat in the cinema waiting for the serious Iranian drama that was my chosen viewing fare for that evening to begin, I was serenaded multiple times -- as it was on a loop -- by Celine Dion's My Heart Will Go On, one of the promotion gimmicks for Titanic 3D.

If nothing else, this "development" got me seriously questioning the suitability of that Mongkok multiplex as an appropriate venue for film festival screenings.  And it is a real testament to Goodbye that it took only a few scenes to establish that the world lived in by its protagonist and those around her lies a universe apart from any Hollywood movie's -- and only a few minutes for me to feel like I had been thoroughly sucked into that other space that also is very different from the realm which I personally occupy.

A few months back, I had viewed and been blown away by Mohammad Rasoulof's The White Meadows, an allegorical political film shot in an area of Iran whose incredibly photogenic landscape is dominated by a large lake and surrounding salt marshes.  Goodbye, Rasaoulof's follow-up film after The White Meadows, also happens to have been made after the filmmaker was arrested, jailed and, post release on bail, slapped with a travel ban.

Going into a viewing of Goodbye with this knowledge in hand, it's well nigh impossible to not see its director-scriptwriter's plight in that of the protagonist: a Tehran-based lawyer, recently disbarred for her activism, who spends the bulk of this film trying to leave her country and get away from the claws of its repressive ruling regime.  And it makes seeing the difficulties she faces in trying to not only break free but, also, to live and breathe while biding her time before making what is effectively an escape bid all the more painful.

A married woman, she is physically separated from her journalist husband who either has been exiled to the south of the country -- or has fled there to escape capture.  Now she lives a largely solitary life, filled with whole pockets of silence, in an apartment where she is more likely to be paid visits by plainclothes policemen and/or security agents than friendly faces such as those belonging to her mother (who, it is made clear, lives a distance away from her).  A life that is, at best, depressing; and, at worse, one in which her very existence is under threat.

Almost needless to say, this film which won the Iranian auteur the Best Director, Cannes Un Certain Regard award does not make for enjoyable viewing.  At the same time, I think that's actually the point -- because feeling uncomfortable when viewing the admirable (even if hard to love) cinematic effort means that it has successfully gotten under your skin and conveyed some modicum of the discomfort (to put it mildly) to be found in its maker's life as well as that of the offering's protagonist.  Consequently, long after you've said goodbye to it, it really is the case that you'll find that the memories of Goodbye do stay strong, and with you.

The horror indeed!!! I think "My Heart Will Go On" played at least three times while I was in that cinema... :(