A Letter to Momo viewed one morning at the 2012 HKIFF 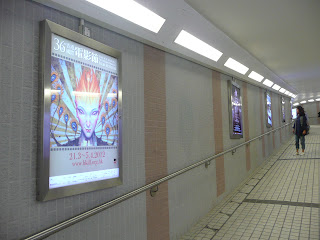 The 36th Hong Kong International Film Festival has ended
but my reviewing of films I viewed during the fest continue!

A Letter to Momo (Japan, 2011)
- From the Animation Unlimited program
- Hiroyuki Okiura, director

The morning after I attended an evening screening of 13 Assassins and then went with two fellow film fan friends -- one visiting from Britain, the other from Canada -- for dinner (and sake) at my favorite yakitori-ya in Hong Kong, I woke up early to go attend a morning screening of another HKIFF offering. As someone who is more night owl than early bird, I try to keep morning screenings to a minimum.  But it's hard to completely avoid them during such as the Hong Kong International Film Festival -- and, as it turns out, I went to two over successive weekends at this year's HKIFF.

I am happy to report that I got quite a bit out of both of the films I viewed in the HKIFF's 10.30am slot.  As I previously attested, I found The Look fascinating enough.  As for A Letter to Momo: I really am sincere when I state that it'd rank in the top five of the sixteen films I viewed at this year's Hong Kong International Film Festival.

Hiroyuki Okiura's animated coming-of-age drama centering on a girl who is brought to live by her newly widowed mother to her old family home on the remote rural island of Shio is the kind of film that unquestionably was made with a lot of care as well as love.  So it actually doesn't come as too much of a surprise to learn that this traditional hand-drawn anime work took seven years to make (even while one can't help but admire the dedication and persistence of its filmmaker.)

A Letter to Momo has drawn positive comparisons with Hayao Miyazaki's Spirited Away and My Neighbor Totoro.  Some of the scenes depicting life in a seaside settlement may also bring to mind Miyazaki's Ponyo on the Cliff by the Sea.  But the 13-year-old protagonist in this Hiroyuki Okiura film appears older -- and definitely also is sadder and more taciturn for much of the movie -- than those Studio Ghibli offerings' main female characters.  On a related note: the overall tone of A Letter to Momo also is more bittersweet than those Miyazaki movies.

Momo holds dear a piece of paper with the words "Dear Momo" written by her father that she found in a drawer of his desk at work after his death.  At the same time, she also is wracked by guilt along with sadness whenever she sees and thinks of this unfinished "letter" as the last time she saw her father, she had uttered words in anger that she came to deeply regret having aimed at him.

After moving to Shio, however, A Letter to Momo's protagonist soon finds herself with little time to dwell on such thoughts as a result of her discovering the existence of three mischievous goblins that -- a la Totoro and the soot sprites -- few people other than her (and most definitely not any adults) can see.  Frightening at first, these supernatural creatures gradually come to reveal their softer and fun sides to Momo.  In the process, they slowly but surely help her to open up, psychologically heal and also emotionally (re-)connect with others, old family members and new friends alike.

Among the more interesting -- and admirable -- aspects of A Letter to Momo for me is how this film has whimsical supernatural elements and obviously is an animated work yet also can feel so very "real" as well as realistic.  In particular, I found its depiction of grief and how different people going about attempting to deal with the major loss of a loved one to be very moving, and their eventual coming together emotionally cathartic and touching.  And lest there be any doubt: yes, this cinematic work really did literally move me to tears even while also having a few scenes that will surely make one smile, laugh and, in at least one particular instance, get one's adrenaline positively pumping away!

My rating for the film: 9

This film sounds like, yet another, good reason why I should jump off the Disney/Pixar bandwagon.

Disney and Pixar have made some good movies -- my favorites include "101 Dalmations", "Robin Hood", "The Incredibles" and "Up" -- but there's definitely more to animation than them. In particular, if you are looking for more interesting female protagonists, would highly recommend that you look at the works of Studio Ghibli -- particularly those directed by Hayao Miyazaki. And yes, "A Letter to Momo" might also be a good place to start your beyond Disney/Pixar exploration. :)

Hi YTSL, I am crossing my fingers that A Letter to Momo makes it to Singapore, somehow!

I am looking forward to A Letter to Momo after reading your review. :)

I hope there will be morning screenings for the film fest here in Singapore.

Good luck on that... and if it doesn't, its DVD is one you shouldn't have problems getting into Singapore! ;b

Morning screenings? Guess you really are a morning person! ;b

Hi YTSL! I was already sold by the trailer, but your review definitely seals the deal.

Speaking of bittersweet films, I wonder if you've had a chance to see Starry Starry Night. It's a recent favorite of mine.

Thanks for reading my review and I'm glad it makes you want to seek out "A Letter to Momo".