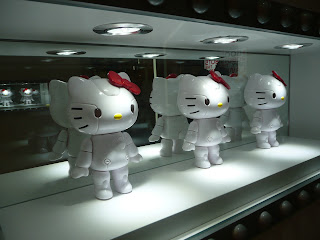 In lieu of my not having a photo of Robo-G, here's going ahead
and offering up a photo of various Robot Ks instead! ;b

In recent years, various articles have been written about Japan's love of robots, especially humanoid ones.  And it's Japanese inventors who have created such seemingly straight-out-of-science-fiction-and-anime machines as female android Geminoid F (who recently made an appearance in Hong Kong at Cityplaza's Robots in Motion 2012 show) and humanoid robot ASIMO.  Thus it was that when viewing Robo-G, I got to thinking that this Shinobiu Yaguchi offering surely is an "only from Japan" movie.

Among other thing, it seems a very Japan thing for there to be a robot contest -- and one at that in which a trio of young engineers at a small consumer electronics company would have an entry.  And even while it does involve a greater credibility leap, I also could imagine such a scenario as that in which an enthusiastic young Japanese woman (essayed by Yuriko Yoshitaka) might actually get infatuated with a humanoid robot and it additionally could fit within the realm of possibility for that same young woman to be an engineering super brain as well as mega robot(ics) geek!

If Robo-G were a Hollywood movie, the American male equivalents of the main characters found in this Japanese movie would be super competent individuals (and, I'd imagine, the female less so).  My sense too is that the robot competition in which they are taking part would be taken far more seriously (whereas in the Japanese movie, there doesn't seem to even be formal prizes to compete for, only a chance for welcome positive publicity via TV coverage and exposure).

But since Robo-G is a Japanese movie, the whole affair turns out to be largely played out for laughs -- with its three main young male characters (who are played by physically diminuitive Gaku Hamada, tall and thin Junya Kawashima and the distinctly overweight Shogo Kawai) already not having all that much confidence in their robot invention before it was inadvertently activated and then proceeded to literally crash out of a window and break into several pieces after falling several floors down!

Filled with desperation as well as despair, this anti-heroic trio cook up a scheme that involves their getting a human to don the reconstructed outer sections of their robot.  Needing this particular human to be a specific height and size, they end up having a 73-year-old grandfather (portrayed by Mickey Curtis (AKA Shinjiro Igarashi) "powering" (playing) the robot.  (And lest you think that this paragraph contains major spoilers, suffice to say that the movie's plot focuses considerably more on what happens after the old man gets people more and more excited about the robot by way of his actions while wearing that robot suit.)

What with contemporary Japan aging faster than any other country in history, it makes sense that the main protagonist of Robo G turns out be an elderly gentleman rather than a younger individual.  On a related note, it actually is quite the traditional East Asian message that this 2012 Japanese film tenders to its viewers: that is, that older folks still can contribute to society by doing such as helping and inspiring younger generations whose members may be more technically savvy than older people but still have much to learn from their seniors.

I found the film charming but have to say that I saw better Japanese films at this year's HKIFF! All in all, had a very good HKIFF after all my fears... ;b

A couple of notes: I love your characterization of Robo-G as an "only from Japan" movie. Only from Japan could almost be a sub-genre although what it would be sub to I would have to think about.

In my more rational moments I think that Hello Kitty is a great product by Sanrio and nothing else but when I see a bunch of them lined up I almost have to laugh or at least smile. They are a cute little bunch.

A bit more re "only from Japan": I think a lot of Americans tend to think of extreme cinema when seeing/hearing this phrase. I wanted to show that there's far more to Japanese cinema than that.