At the beginning of this week, I got pretty snap happy at the Tam Kung birthday parade in Shau Kei Wan, a local festive event that tends to be overshadowed by the Cheung Chau Bun Festival and Buddha's Birthday that take place on the same day as it every year. One day, I will make it out to check out the Cheung Chau Bun Festival but, if truth be told, the thought of the sure to be huge -- and potentially ovewhelming -- gathered crowd for this much hyped up event put me off heading over there this year and also last.

(As an aside, that's one of the great things of the Tam Kung birthday celebrations: It really felt so communal and untouristy -- and thus all the more authentic and enjoyable to someone who may have got out of anthropology some years ago now but still feels like there's quite a bit of the anthropologist in her still...) 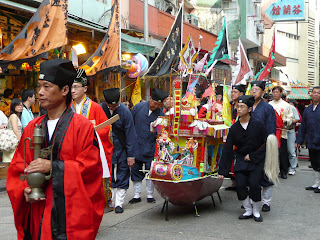 Starting close to where we left off:
with Taoist priests and disciples -- this time around
also with a symbol-laden mock-up boat in tow 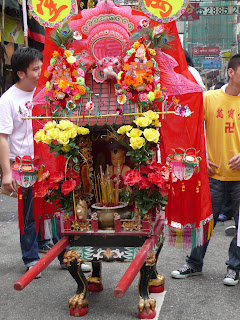 A portable shrine, complete with what looks to be
a Taoist baby god, temporarily at rest
in the middle of Shau Kei Wan Main Street 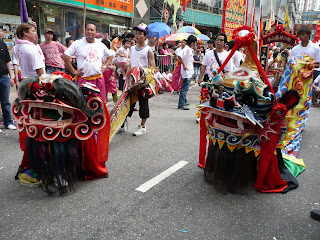 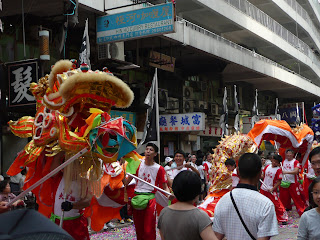 The colorful dragons, on the other hand,
are happily on the move, doing such as
chasing after an equally brightly-colored ball 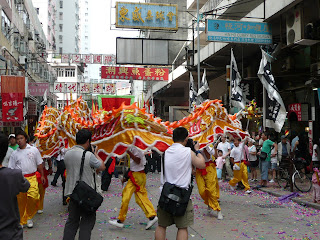 ...as they weave expansively along the parade route 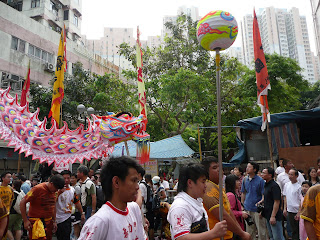 The dragons are so eye-catching that
I simply can't resist including another shot of one! ;) 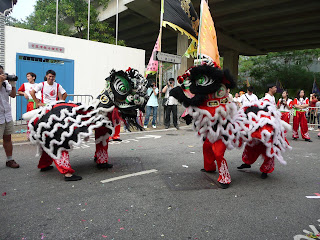 Lions at play on nearby Tam Kung Temple Road 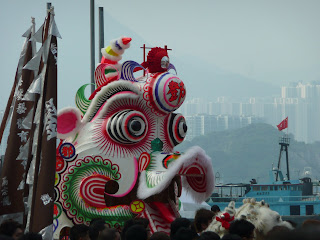 great shots! I'm always fascinated by the mingling of Taoism/Buddhism in Chinese culture. Having read quite a bit about both, I think I may have a hard time picking out which was which in person.

At least I can recognize the Taoist priests from the movies, eh? (A Chinese Ghost Story)

Thanks for appreciating the photos!

Re the Taoism/Buddhism intermingling -- talking to Westerners in general about things, I often found it difficult to see things as either/or as much as they did/do and wonder whether it had something to do with my Asian background. The more I think about it, the more I think there's something to that... after all, in the Tao, there's yin in the yang and yang in the yin, etc.

Getting back to the Shau Kei Wan festivities: I'd have said that it's Taoist except that in one photo, I see a Buddhist swastika. So... yeah, I guess there's some mingling going on there too... ;b

Is this you Yvonne? Looking at the profile it sounded totally like the description of you. This is Harold. I was looking to find out what time the parade starts at the Tam Kung Festival and came across this blog. Do you know? The Hong Kong Tourist Association site and the Chinese Temples Comittee sites are both lame. I'm surprised by the CTC's site since they run the temple.

Yup, it's indeed me! Yeah, had problems getting the information from the web -- had to phone to get the information that this year's Tam Kung Festival parade bit is due to start at 9am and go up to 2pm. :)