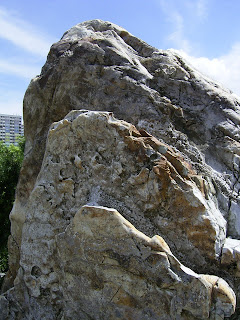 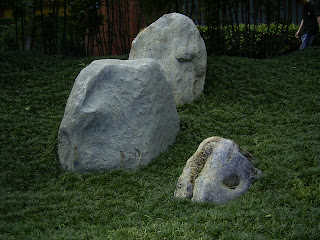 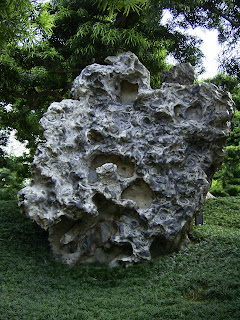 Hong Kong Rocks! Believe it or not, that's the title of an article I wrote around this time last year -- and which, I was proudly surprised to find, currently comes up number 3 when one does a search for "Hong Kong rocks". (At the same time, I don't claim responsibility for such as the typo in the final paragraph as I had left that particular publication by the time the piece was published!)

The Hong Kong rocks article focused on natural geological formations found in the territory, notably the iconic Lion's Rock that I featured in a previous Photo Hunt entry and the phallic Lover's Rock, a photo of which can be seen in this photo-essay but also such other geological curiosities as dog head-shaped rocks.

Rather than go along that route, however, I've opted here to focus on some rocks found in Nan Lian Garden over in Diamond Hill, a part of Hong Kong that invariably gets me thinking of the movie named after it as well as Hollywood, Hong Kong, one more film set in the area (and partly named after its Plaza Hollywood complex).

Designed as a Tang Dynasty-style garden to complement the nearby Tang Dynasty-style Chi Lin Nunnery, it has sections that strike me as Zen-like -- and get me contemplating the interesting shapes, textures and beauty of single or isolated groups of rocks. And yes, it also does get me thinking that Hong Kong really rocks for having places like this in which the public are free to wander, wonder and generally get some aesthetic respite and inspiration. :)

I find this a more interesting way of "rock collections" - minus the hassle of cartinf the rocks back home and more environmental friendly, that they are preserved for others to appreciate.

p/s Mr Friday's post was a shot from Cameron Highlands, one of my fav vacation spot in M'sia :)

Very interesting ! It's incredible all I learn through blogs, lol !

I love the rocks at Nan Lian Garden! The rock in the third photo is especially amazing... a whole other universe just waiting to be explored...

Interesting, and great choices for this week's theme.
Hong Kong is on "my list" of places to visit, and this sounds very inviting to me.

The rocks in my picture are way too big for me to cart about and too nice for me to chip. So yes, my preference -- like yours -- is to collect via photos! :)

Yes, the blogosphere actually can inform! ;b

You've not yet been to Nan Lian Garden (or the Chi Lin Nunnery), have you? If so, hope you get to it on your next visit to Hong Kong! :)

Hope you come over to Hong Kong sometime -- and have an enjoyable time when you do. :)

Cool collection, as expected. another reason to think about Hong Kong trip...

What a most enjoyable post. I love how you add a bit of story with your photo hunts. It really give the visitor so much more to enjoy.

My rocks are now posted. Won't you try to stop by to view my photos today? Have a great weekend.

Impressive, and yes, providing for a few minutes of thinking on things.

i join the group. i am mire interested in taking pics than taking them home or chipping them or anything like that

What a wonderful take on the theme. THe rocks definitely deserve contemplation. Have a great weekend

This was a topic almost made just for you, wasn't it? Ironic that you did a story a year ago about rocks. Great pictures. I really like them.
Hope your mother recovers nicely.

These rocks have such interesting shapes, markings and textures! Especially interesting is the one with what appears to be a "watermark", suggesting layering!

I would love to visit Hong Kong one day! These rocks are fascinating to look at with their strange shapes. Very cool! :)

these rocks are pretty interesting. thanks for showing us a different side of HK.:P

Those are some truly magnificent rocks! I love loving about Hong Kong thru your blog each week.

Hope you'll have a good time when you finally come over to Hong Kong! :)

Thanks for taking the time to read and appreciate as well as just quickly look. And yep, have gone and checked out your own take on the theme. :)

Glad to know I provided you with some food for thought! :)

I have geology friends who can't resist chipping off bits of rock to take home. But, yeah, even after taking geology courses, I still prefer photos to actual specimens! ;b

Glad you agree and hope you have a good weekend too! :)

Yes, have to say that this was one Photo Hunt theme I didn't have problems with at all. And thanks for the good wishes re my mother -- guess you've been reading other entries on this blog besides this one! :)

Don't know if you clicked on the photos to enlarge them. Have to say that the third photo is almost pychedelic (or should I say surreal) when viewed that way! ;b

Wow... sounds like there are quite a few Photo Hunters getting interested in visiting Hong Kong one of these days... :)

You're welcome -- and yes, there really is much more to Hong Kong than may seem to be the case at first, stereotypical glance! :)

So glad you're visiting regularly and enjoying learning re Hong Kong via this blog. :)

Those are wonderful rocks and as always your posts are so interesting and well written.

It does indeed look like another planet, in fact many films have been shot there portraying just that, an alien landscape. During our last visit we watched them film a segment for an up-coming release.

thanks for stopping by

Very interesting rocks and commentary, YTSL. How cool that you wrote an article about them, too.

They all invite you to touch, don't they? It's true that you are lucky to have places of that sort.

I'm glad to hear of your mother's progress and hope it continues well.

You always are blowing our concept of HK right out of the water YTSL.

Wonderful group of photos.
Have a happy weekend.

Fascinating rock shots today ~ such rich history. I like to contemplate the teXtures too.

now you make me want to move to Hong Kong...definitely zen-like like you said

Thanks for reading and appreciating as well as viewing! :)

Thanks for answering my query on your blog as well as visiting this one. :)

Yeah, I agree it's cool. I remember my boss being rather skeptical when I mooted the idea but reckon the piece turned out okay (and, of course, the title is fun even while simple). :)

I'm considered a pretty tactile person but, actually, I think I generally just "touched" with my eyes. (My college art history professor taught me to do that. It's quite a fun activity, actually!) ;b

I'm very flattered and happy by your expectations comment. :)

Glad a sense of the textures came through in the photos. :)

You can speak Cantonese as well as English, right? If so... hey, Hong Kong might be worth a try for you! :)

great set of photos with a wonderful entry. i learned so many things about HK each week. :)

Thanks... and do your comments mean that you'll be visiting regularly? ;b

YTSL, I have indeed been to Nan Lian Garden, but it was so beautiful that I could easily return for more visits.

Yes, agree that Nan Lian Garden's the kind of place that could be fine to visit more than once. Incidentally, did that recently with another fine garden in Hong Kong -- the Kowloon Walled City Park. :)

I haven't been to Kowloon Walled City Park yet, but it's definitely on my list. And I gather from your repeat visit that it's well worth seeing.

All in all, I think it's nice enough... but Nan Lian Garden's still top on my Hong Kong gardens list. :)

What a genuinely nice surprise to find a Singaporean who loves Hong Kong! (Actually, I have a Singaporean friend currently residing here who feels that way -- but got the feeling he was very much the exception to the rule!) ;b

These are beautiful rocks. I love their natural shapes and textures.

My thoughts exactly -- hence my being drawn to photograph those rocks! :)