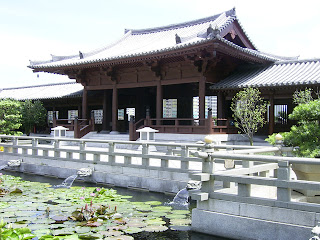 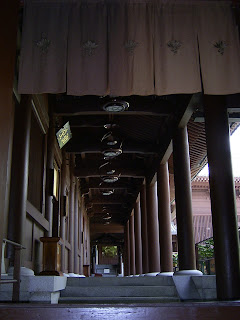 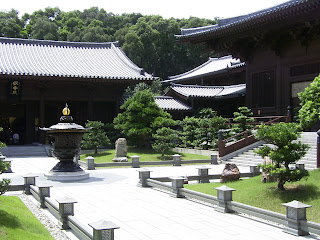 This week's Photo Hunt is one for which I felt spoiled for choice with regards to what to pick. Alternatively put, I felt free to select a whole bunch of photographs as its theme is not only so broad but also very open to interpretation. In the end, I decided to go for a trio of photos of a beautiful place over here in Hong Kong for which entrance is free (and where, unlike with some other religious establishments (mostly, I've noticed, Taoist ones), one is free to go about taking as many photos as one would like).

The Chi Lin Nunnery is located right next to the Nan Lian Garden, some of whose rock displays I put up photos of in last week's Photo Hunt entry (and also featured in my entry for the Shiny-themed Photo Hunt as well as another entry on this blog). And just as the Nan Lian Garden is a Tang Dynasty (618-907 CE)-style garden, the Chi Lin Nunnery's architecture is meant to evoke the style of that ancient Chinese Dynasty. Something else of note is that the entire wooden structure were built without the use of a single nail in their construction! Even without knowing this fact, however, I think you'll freely agree after seeing my pictures that it's quite the aesthetically impressive establishment, right? :)

Alasandra, The Cats and Dogs said...

What lovely places. Thank you for sharing.

Those are all beautiful photographs and a great take on the theme.

oh beautiful photos especially the first one.i so like it.wanna check out mine? i am new to this photohunt thing and hope mine is accepted.

Those are nice pictures . Hope you have a wonderful weekend.

I even would pay for entrance to these lovely places !

Yes....I like your style....thinking you're free to chose ANY photos. Good thinking on your part. And, beautiful pictures for us too.

If you haven't stopped by to view my 'free' photo, come on over...it's a free trip - oops, no guess not. It costs money to travel the 'net! Happy Hunting.

What a lovely and serene spot! Thanks for sharing it with us!

wow, the history that is there for the finding.

beautiful place to see, great take for this week theme..;) Have a great weekend!

Life's Impression
My so called life

That must be the most beautiful and peaceful place. Wonderful craftsmanship to be able to contruct that without any nails, nail-free! It's amazing that it isn't over-run with people if entry is free.

Yes, this is beautiful.Also peaceful. Thank you.

Another chance to travel over the world freely. Very interesting.

wow! you have a very nice picture and I love the way you put consistency of the picture, indeed that is a great post for this week theme! keep it up!!!

check mine:
PhotoHunt-1
PhotoHunt-2
Have a great Weekend!!!

Thanks back to you for visiting and appreciating! :)

Thanks, and I did go check your photos out. Great job on your first Photo Hunt! :)

Thanks and hope you have a happy weekend too. :)

With places like these, I sometimes am very happy to offer up a donation by means of buying such as a souvenir guide book. At the same time, it's all the more cool that they're free, right? :)

Yes, it does cost money to get on the internet but it often feels so worth it, I think. :)

Actually, although it looks it, the Chi Lin Nunnery's buildings aren't that old... (Remember: Tang Dynasty-style rather than actual Tang Dynasty!) ;b

Yes, it is surprising how few people actually go to this beautiful place. Seems like the word "nunnery" can be off-putting to some! ;S

Definitely agree that it's peaceful and beautiful (as well as free). :)

Yeah, must say that I enjoy getting to see various parts of the world courtesy of the Photo Hunt. :)

What a beautiful place, very serene looking in that bustling city you live in. You always find something interesting for us YTSL. Thanks for the visit and have a great weekend

Wow, i didnt know there is such a beautiful place in HKG. Nice photographs. Would like to visit next time i visit HKG.

Thanks much for the kind and complimentary words! They're much appreciated. :)

There are a number of really nice places over here in Hong Kong. They (including the Chi Lin Nunnery and adjacent Nan Lian Garden) may seem a bit out of the way to visitors who tend to stick pretty much to Tsim Sha Tsui, Central, Wan Chai and/or Causeway Bay but, really, would recommend them for a different taste of Hong Kong and much much more.

happy to be given the chance to travel to great places for free via photohunt. thanks for posting this one!

Due to having to pay for the internet, it's not completely free... but, still, right? ;b

This place is gorgeous.