From Shek Pik Reservoir to Tai O, Part I (Photo-essay)

In the last (thus far -- since she never say that she had retired for good) film that she appeared in, Brigitte Lin Ching Hsia played a drug trafficker who is never seen without both a trenchcoat and a pair of sunglasses on her. When asked why, she muses about how changeable the weather is. And while those who live somewhere other than where Chungking Express was filmed may think that her answer is a reflection of her mercurial nature, the fact of the matter is that Hong Kong's weather really can be pretty capricious and not all that easy to predict.

Take, for example, the day back in February that a bunch of folks, including moi, decided to hike from Shek Pik Reservoir to Tai O along Sections 7 and 8 of the Lantau Trail: When we met up at the Outlying Islands Ferry Pier in Central that morning, the fog (and/or air pollution) was so bad I had problems seeing across Victoria Harbour to Tsim Sha Tsui. But visibility had improved quite a bit by the time we arrived at Shek Pik Reservoir (via a ferry, followed by a bus ride) and just before we reached Fan Lau, we were greeted with bright sunshine and blue skies!

So while the initial photos taken along this hike tend to be of the close up variety and/or with views that can be on the misty side, I promise that it was quite a different picture later on (in at least one more photo-essay to follow!)... 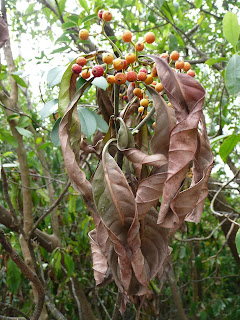 The first photo I took on the hike -- and yes,
I have Hong Kong's air pollution to thank for
making me become more observant of sights
in the immediate vicinity when out hiking! 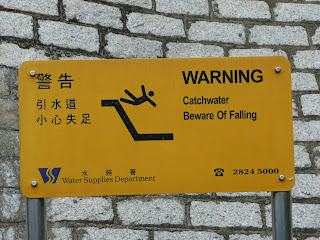 Part of me knows I should take warning signs seriously
but the graphics often amuse more than scare! 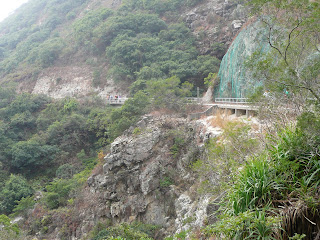 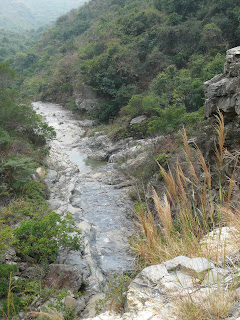 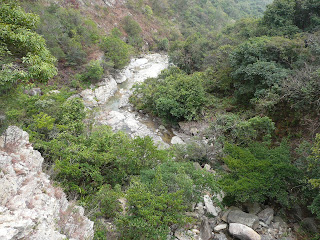 ...not all that bad a thing when it helps
produce views like this, right? 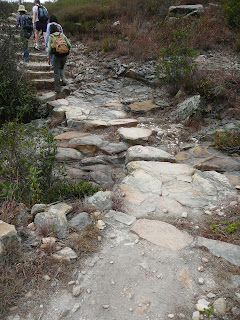 After a few kilometers walking on the concrete
Kau Ling Chung Catchwater, our path became
more rugged (and attractive in the eyes of many) 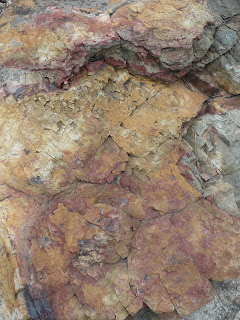 As my geology professors at Beloit (especially
the wonderful Carl Mendelson) taught me to appreciate,
there truly can be beauty underneath one's feet 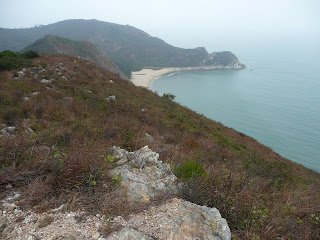 Looking back at a scenic view of wild Hong Kong that
actually would pale in comparison to what's to come! ;b
To be continued... (of course!)

As always, it's a pleasure to see and learn about Hong Kong's extensive hiking trails and great outdoors.

I've got to ask: are you planning on completing every section of the major trails?

Are the berries(?) in the first photo berries(?)or an alien life form....very very cool photo. I like the closer range photos in this essay a lot.

Thanks for enjoying and commenting on my hiking photo-essay posts as well as others. As to your query: actually, no -- as there are some hikes which just seem way too difficult for me to try to go on! :S

Heheh... they're berries alright -- but, before you ask, have no idea if they're edible! :D