Dim sum with my mom 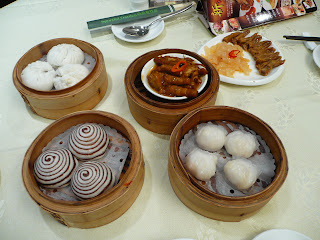 Some might think that five dishes
between two people is a lot, others too few
-- but for us, it's just right!
As I write this blog entry, my mother's lying in a Singaporean hospital where tomorrow morning, she'll undergo pretty major surgery. To state the obvious: it's hard not to think of her -- and worry about her. But when we spoke on the phone about half an hour ago, she was pretty cheery and actually sounded a lot less worried than I know that the rest of the family currently are.

To psychologically boost and cheer me up somewhat, I'm going to recall some memories of when she visited me in Hong Kong a couple of months ago, during which we sampled quite a few of the Big Lychee's culinary delights. Among the dining highlights of that week was dim sum brunch at the peculiarly named Sportful Garden in Causeway Bay.

Not being huge eaters, we decided to share just five dishes -- along with a pot of tea -- between the two of us; with our choices being a mix of basic and more exotic eats. Because we wanted some variety, however, we only ordered two of the staple dim sum triumvirate of har gau (shrimp dumplings called "kau chee" in Hokkien), siu mai (pork and mushroom dumplings) and char siew pau (roast pork buns).

A word (or, actually paragraph!) re Sportful Garden's char siew pau: I have to say that they are among the best I've ever eaten -- made special because they are cooked with a special abalone sauce! In other words: their char siew pau actually is pretty extraordinary!

Because I was with my mother (who, like me, loves eating what can be described as "spare parts"), I could happily order two dishes to share that would freak out some other people I know: i.e., stewed chicken feet (and should you wonder, chicken feet is good at soaking up sauces!), and a plate of cold jellyfish and hot ducks' tongues (both of whose textures are what contribute to making them good eating as far as the initiated are concerned!)!

Lastly, there were steamed sweet custard buns for dessert. And again, I have to say that the ones at Sportful Garden really do seem especially good -- because, my mother suspected, they used richer duck eggs rather than regular chicken eggs in making the custard.

So... does our meal sound decadent or weird to you? To be honest, it was neither to us -- and, instead, was just plain delicious! So much so that I hope to be able to repeat the experience with my mother again before too long...

Yes, hope all goes well with your mom's surgery.

The first time I got dim sum, I ordered way too much (not on carts but on little cards you had to order from).

My friend tried to explain to me that it was not like ordering a lot of sushi.

5 orders of dim sum is cheaper than sushi and more filling!

My problem is that I always want to try different things; maybe they should have like a tasting menu where you can get just one piece of different dim sum delicacies?

Your meal with you mom sounds wonderful except for the "cold jellyfish with hot duck's tongue" which seems exotic to me though I would be willing to try it....And I do hope someday to have dim sum with both you and your mom and will be happy to try out both of your recommendations.

I'll keep your mom in my thoughts and wish her a successful surgery and quick recovery.

Unlike you and your mom, I have a strong aversion to "spare parts". I'm usually pretty adventurous when it comes to food, but not when it comes to meat. Everything else, however, sounds and looks wonderful. I especially like the swirly custard buns!

That was a fascinating description of your meal. It sounds very enjoyable. (Though I confess a bit of squeemishness about the "spare parts" dishes.)

I hope that your mother's surger goes well. I wish her a speedy recovery!

An update: my mother came out of surgery earlier than expected and is not in ICU. The doctor said the operation went smoothly. Hoping -- and hopeful -- for a speedy recovery...

The trick with dim sum is go with lots of people. This way, you get to try a lot more things. Same with hot pot! :)

I hope too that one day, before too long, you can have dim sum with my mom and I. :)

Thanks and fingers crossed that the recovery has started and will be indeed be speedy.

Re "spare parts": The way my mother initiated me to its pleasures was to get me to eat first, then tell me what I had eaten (especially after I had liked what I had eaten). Maybe you should try that approach! ;b

Heheh re the "spare parts" freaking this out. Incidentally, I've just returned from having a yakitori meal that included chicken liver and soft bone... ;b

And thanks to you too for your good wishes re my mother's health. :)

Glad to know your mother has come out safe and is recuperating now...how come she had to go to hospital in Singapore? Doesn't she live in Penang??

Thanks for the update, YTSL. Glad your mom's surgery went well! :)

Best wishes to your Mom.

I've been a fan of hers ever since she made guest appearances in your movie reviews over at Brian's Brooklyn Bridge site.

My mother's home is indeed Penang but the Penang doctors referred her to Singapore. Still, there's a Penang connection: her heart surgeon's married to a Penangite... ;)

You're welcome re the update: Another one - she's still in ICU but due out some time tomorrow. :)

Thanks -- I'll convey your wishes to my mother. Or better yet, am hoping that after she's back in Penang and able to go online, she'll read this post and the comments thread herself. :)

When I was little I had so much dimsum that I eventually got turned off by it and even stopped eating it, until my college years when I started enjoying it again. I like all the dishes!

Latest update: my mother's out of ICU. She's still in hospital though -- only due out next Tuesday -- but I spoke to her over the phone earlier today and she sounded good and even cheery! :)

Re dimsum: There are some dishes I care for less than others but I love doing it -- and am glad to be living in a place where I've been able to have it every once in a while. :)

Thanks, will convey them to her. :)

Hope your mum is ok. She looks healthy and I will never suspect that she is sick at all. Is she back in Penang now? Please send my regards and wishes for her good health.

Well, she's better... post operation which was pretty major (triple heart bypass) and thus pretty scary. She's still in Singapore -- due out of hospital tomorrow though. I think the general opinion is that it's better to be safe and not travel for at least a week after that. And yes, will send along your regards and best wishes.

A message from my mother (who e-mails but hasn't yet taken to commenting on blogs):-

"Read your blog and am very happy so many people prayed and showed concern for me. Please convey my thanks to them and let them know that I'm on the road to recovery."

P.S. She's recovered enough to have been able to fly back to Penang where she can do such as surf the net! :)