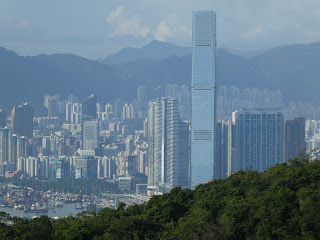 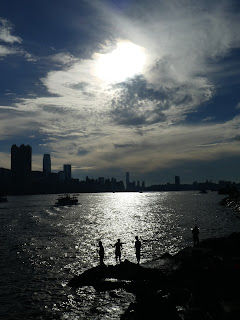 Late afternoon view from the eastern edge
of Victoria Harbour over at Ma Wan Tsuen
Victoria Peak and Victoria Harbour are two well known Hong Kong landmarks and few visitors to the Big Lychee leave the territory without going up the former and taking a ride on the Star Ferry across the latter.  At the same time, however, I can't help but feel that tourists to Hong Kong are, more often than not, selling themselves short and failing to do these landmarks justice.
In the case of the highest mountain on Hong Kong Island (but only the 31st highest in the whole of Hong Kong): far too many people mistakenly think that the only part of the Peak that's accessible to the public is the area around the Peak Tower.  As it so happens though, it isn't only some 150 meters below the summit of Victoria Peak but also happens to be the most crowded and therefore least attractive part of the Peak as far as I am concerned!
If people just ventured a few meters further away from what would be more accurately referred to as Victoria Gap onto Lugard Road, they'd find themselves on the northern edge of the Peak, and with easy access to green sights and panoramic vistas that most visitors to the area don't avail themeselves to.  And if they just went a little further off the beaten track by diverting west along Lugard Road to a little pocket park at the foot of High West before returning to Victoria Gap via Harlech Road, along what makes for an easy-to-follow Peak Circuit, they'd find that largely shaded path to be on the pleasantly quiet and peaceful side on most days.
Part of me wonders whether it's wise to divulge this information as I must admit to loving that this part of the Peak has not been over-run by people.  But then I got to realizing that it's not as though this blog has hundreds of thousands of readers!  In addition, what I consider to involve just a bit of extra effort to get to may be deemed too out of the way by others.  Hence it being so that it's not just that few tourists venture to certain of what I consider to be really cool Hong Kong locales but that few Hong Kong residents do so too!
In the case of Victoria Harbour: most visitors to Hong Kong don't seem to realize that there are other cross-harbour ferries besides the Star Ferry and more places to walk along the harbour's edge than just the waterfront area near the Tsim Sha Tsui and Central ferry piers.  Alternatively, local shutterbugs tend to eschew those and, instead, make a beeline for spots on both the western and eastern edges of Victoria Harbour like the part of Kennedy Town known as Instagram Pier, the Sai Wan Swimming Shed further west of it, and the area in front of the Tin Hau Temple at Lei Yue Mun.
Regular visitors to this blog will know that I've joined in the very agreeable activity of watching and photographing the sunset from the eastern edge of Victoria Harbour.  And as it so happens, I also reckon that beautiful shots can be had from the usually far from crowded ferry that goes across the eastern section of the harbour between Sai Wan Ho and Sam Ka Tsuen, especially during golden hour! :)
Posted by YTSL at 11:44 PM

This is another fine example of how nature rewards one who strays "off the beaten track" in your Hong Kong. The bottom photo of people on the rocks expresses tranquility, the kind one feels especially in the late afternoon...(My memories of the Peak go back in time to when I walked up Mount Austin Road to the very top for some unforgettable views and then walked downhill until I reached Kennedy Town).

Indeed re it sometimes paying to stray off the beaten track -- and I'm glad that you explored the Peak area a bit and am sure you found the experience to be rewarding. :)