Rallying for freedom of expression and association in Hong Kong 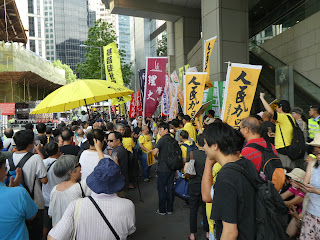 An event I attended in Hong Kong yesterday No, I do not support Hong Kong independence... 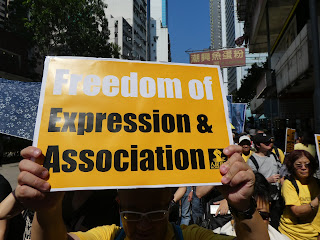 But yes, I do think that we should have freedom
of assembly, expression and association in Hong Kong


I've been out and about quite a bit this weekend.  Last night, I attended the screening of  In the Heat of the Night, a 1967 murder mystery set in small town Mississippi that's particularly notable for its intriguing depictions of race relations in the American South during the height of the Civil Rights movement; and earlier today, I viewed another film in the form of Pom Poko, Isao Takahata's anime with tanuki and environmental issues as its focus.  This afternoon, I also spent a couple of hours chilling out at this year's Lan Kwai Fong Beer and Music Festival.  Oh, and I took part in a rally for free speech yesterday afternoon too.


A pretty last minute affair (the first time I heard about it was on Friday afternoon), the protests were organized in the wake of the Hong Kong government threatening earlier this week to ban a political party and, in so doing, make it illegal to be a member of that party, act on its behalf and/or raise funds for it -- not for what the political party has actually done but what the authorities think that it will do so in the future.  Put another way: we're venturing into "thought crime" territory here; something which should happen only in the realms of "reel-ity" rather than real life, and should be very disturbing to people who value freedom of thought and speech as well as assembly and association.


For the record: the political party threatened with the ban is the Hong Kong National Party; and no, I do not support its calls for Hong Kong political independence.  At the same time though, I don't think any political party should be banned just for thinking of, or advocating, Hong Kong political independence; this especially since it has not called for any violence to be enacted out in order to fulfill its dreams.  And considering how few supporters as well as members that party has (with it not being able to muster even 50 individuals to take part in yesterday's protests), I actually don't think the Hong Kong National Party poses a serious threat to the government of Hong Kong or China's national security.

So why was I out marching in the hot sun on the streets of Wan Chai and hang out for a time outside the Police Headquarters on 1, Arsenal Street, with a bunch of people, many of whom were among the most clean-cut protesters you'd see anywhere, yesterday afternoon?  Because I believe that now is the time to protest and that we better make use of the freedom that we currently have to do so in Hong Kong, otherwise it might be taken away, and sooner rather than later at that. :(
Posted by YTSL at 10:00 PM