New reasons to have hope for Malaysia's future! 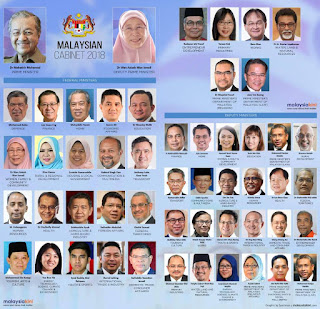 The almost complete Malaysian cabinet
assembled in the wake of the 2018 General Elections
On May 9th this year, General Elections were held for the 14th time in Malaysia's history.  In the wee hours of May 10th, there came some inkling, followed by concrete confirmation, that something unprecedented had happened at the hands of the voters: that is, that for the first time since the country became independent more than 60 years ago, Malaysia would not be governed by members of the Barisan Nasional (BN) political coalition (or the Alliance Party -- which had the same political parties at its core as BN -- that preceded it).
For many people, this result was well nigh unthinkable: not because the Barisan Nasional government of Najib Razak (son of the second Prime Minister of Malaysia) was all that wonderful but, instead, because it was so very prepared to resort to gerrymandering and many other unethical acts in order to stay in power.  Indeed, I have to admit to thinking that nothing could be done to remove the regime from office that I didn't bother to register to vote, never mind actually go out and cast my vote, for the elections -- and, actually, was in Europe when I found out that the opposition Pakatan Harapan (Alliance of Hope) coalition had won enough electoral seats to form a new national government!
In the close to two months since 92-year-old Dr Mahathir Mohamed -- Malaysia's fourth prime minister -- was sworn in as the country's seventh prime minister, I have found myself giggling with glee and sometimes even guffawing hysterically over many political events that have taken place in my home country.  In Spain one evening, I listened incredulously to -- and laughed aloud at -- a news analyst stating on TV that the voters of a fellow Western European country (specifically Italy) would do well to emulate Malaysia's.  Honestly, that may well have been the first time ever that I heard Malaysia being seriously held up by a Western expert as a political exemplar!
More seriously, there's no doubt that the new government has a lot of work to do, notably on the economic front, no thanks to the IMDB scandal that has saddled Malaysia with a RM 1 trillion (US$251.70 bilion) debt.  Decades of "divide and rule" policies and politicking -- which led to a country noticeably divided along many lines (including rural versus urban and class-based, not "just" ethnic ones) in the Najib years -- also have left many people not only feeling excluded when it came to competing for many prizes but also feeling that when political leaders talked about Malaysians, they weren't actually included in the equation.
While it's early days yet, with the new federal cabinet not yet fully assembled, the portends have been good for the most part thus far.  Already, the hated Goods and Services Tax introduced by Najib's government has been scrapped as promised by the new government.  Also, criminal investigations into the 1MDB scandal have been resumed and in the middle of writing this blog post, I learnt of Najib Razak having been arrested on corruption charges!
I am taking quite a bit of heart too from Mahathir's cabinet selections, which feature -- in addition to a female deputy prime minister -- such as a trained accountant as finance minister, an academic as education minister, a doctor heading the health ministry, women given the women and family development portfolio, a 25-year-old first term Member of Parliament as youth and sports minister, and a woman with a master's degree in chemical engineering from Cambridge University given the energy, technology, science, climate change and environment portfolio!
In normal circumstances, this all would not be all that unusual as well as seem logical as well as sensible.  In the times we currently live in, when someone who seems more into harming than protecting the environment is the head of the USA's Environmental Protection Agency, someone not known for his diplomacy is Britain's Foreign Secretary, etc., it's so refreshing and promising -- and promise, along with hope, is what I now have for my country, and no small degree of pride too! :)
Posted by YTSL at 6:45 PM